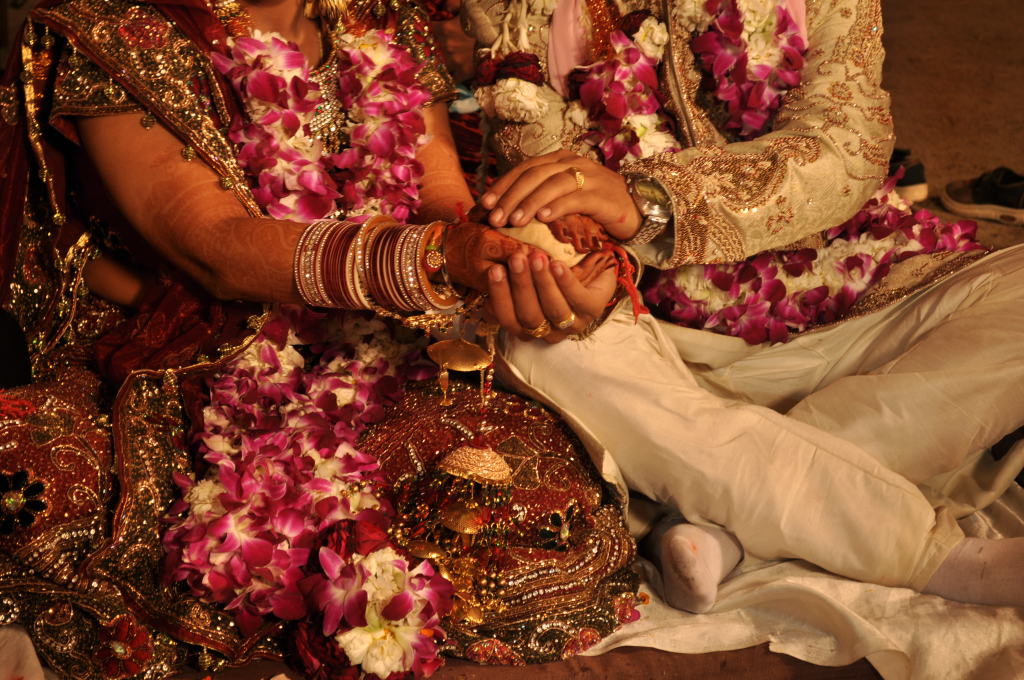 This article is written by Somya, a student of 4th yr. LLB from Bangalore Institute of Legal Studies.

‘Marriage’ is considered a sacred institution in our Indian subcontinent.  It is an integral part of our culture. India is a diverse country and thus has people from a number of religions and cultures, residing here.

When it comes to marriages in India, arranged marriages are considered the best way to get a boy and a girl to tie the marital knot. Indian parents are the ones who take utmost interest in it, right from the girl or boy they want their child to get married to, till the date and time of marriage. This is so because there prevails this thinking that they are a lot wiser and experienced than their children, and will decide the best for them. Indians consider marriage as an auspicious culmination of two souls, that they decide every ritual of marriage according to the astrological positioning of the stars of the bride and the groom.

We are aware of the extent of influence that caste and religion have in our country. And when it comes to marriage, it is considered the most important criteria for a properly solemnized marriage. Parents select the prospective bride/groom for their children from the same caste as theirs. Inter-caste marriage is still considered a taboo in many places in our country. India follows a very rigid structure of the caste system. People are expected to marry within their caste and whoever marries out of their caste and defy the traditional barriers are shunned in the society. There are a number of honor killings reported every year (highest being in the states of Haryana) and unfortunately, they show pride in doing so. Thus there came a grave need for a law to safeguard the interests of  those people who rose above these caste and religious divides, to marry for love. So the Parliament enacted the Special Marriage Act, 1954 which provides for a special form of marriage for the people of India and all Indian nationals in foreign countries, irrespective of the caste and religion they follow.

Now it is very important that every Indian should know at least some of the basic things about the Special Marriage Act. Let us discuss 10 of those things-

Inter-caste marriage is a marriage between people belonging to two different castes. Gone are the days when people used to marry blindly wherever their parents decided them to. Now the youth has its own saying and choice and they prefer getting married to someone who has a better compatibility with them rather than marrying someone who belongs to their caste or their religion. It is them who have to live with their partner for the entire life and thus caste or religion is not a matter of utmost consideration at all now. Love is a beautiful emotion and it should not be weighed with something like caste or religion. All religions are equal and marriage amongst it should not be a big deal. Caste or religion is conferred on us by birth and not by choice, then why are people of lower castes seen with shame and disdain? India is a diverse country and things like this that happens here, is a thing of pity. Thus, the Special Marriage Act is a special legislation that was enacted to provide for a special form of marriage, by registration where the parties to the marriage are not required to renounce his/her religion.

This information is the most important one for every Indian to know as it is through this that they can avail them. This Act covers marriages among Hindus, Muslims, Christians, Sikhs, Jains and Buddhists. This act applies to every state of India, except the state of Jammu & Kashmir. This Act extends not only to the Indian citizens belonging to different castes and religions but also to the Indian nationals living abroad.

As Indians believe in marriages with proper rituals, customs and ceremonies involving pomp and show & extravagant celebrations, the Special Marriage Act does not require any of them. The basic requirement for a valid marriage under this Act is the consent of both the parties to the marriage. If both the parties are ready to marry each other, that suffices it; here caste, religion, race, etc. cannot and do not act as a hindrance to their union.

For marriage under this Act, the parties need to file a notice expressing their intention to marry each other, with the Marriage Registrar of the district in which at least one of the parties to the marriage has resided for at least 30 days preceding the date on which such notice is being filed. The marriage is then said to be solemnized after the expiry of 30 days from the date on which such notice has been published. But if any person related to the parties objects this marriage and the Registrar finds it to be a reasonable cause of objection, then he can cancel the marriage on such grounds. For a valid marriage, it is also required that the parties give their consent to the marriage in front of the Marriage officer and three witnesses.

These are the basic requirements for a valid marriage under the Special Marriage Act, which every Indian must know.

The conditions required to be followed for this special form of marriage is not very different from the requirements of other normal marriages, which happen within the caste. These are the conditions to be eligible for a marriage under this Act: –

Since it is known that inter-caste or inter-religion marriages are still considered a taboo in our country the establishment of Special Marriage Act was a great urgency.

If we look at the positive side of these marriages, we can find that they have added to our national integrity. Unlike earlier times, nowadays people are attracted more to the opposite sex, belonging to other castes and seldom end up considering the communal side of it. People from higher castes tend to fall in love with people from lower castes and get married to them. What is important is the amount of love and affection between them regardless of the status and community they belong to. What we need to know is that Every Indian should change their mindset about the caste system in our country and appreciate marriages between different communities and religion. India is progressing with the increasing influence of education and thus they must know about the advantages of Inter-caste marriages too (yes there are advantages).

These marriages encourage equality amongst the citizens and as a result of it people try to interact more with each other and understand and respect each other and their differences. It sets an example for other people that how love and respect can create a free and happy generation, which is above the caste system and the evils of it.

A marriage is said to be void, where the conditions mentioned in point no.4 are not met with, and the children from such marriages who would have been legitimate if the marriage had been valid, shall be legitimate, whether such child is born before or after the commencement of the Marriage Laws (Amendment) Act, 1976 (68 of 1976), and whether or not a decree of nullity is granted in respect of that marriage under this Act and whether or not the marriage is held to be void otherwise than on a petition under this Act as mentioned in Sec.26 of the act.

Any person married under the Special Marriage Act, must know about this important provision of the Act. The parties cannot petition for divorce to the District court unless and until one year has expired from the date of their marriage as registered in the marriage books.  But, in cases where the court is of the opinion that the petitioner has suffered exceptional hardships or the respondent has shown exceptional depravity on their part, a petition for divorce would be maintained, but if any misrepresentation is found on the part of the petitioner to apply for divorce before the expiry of 1 yr, the court may if any order has been passed, state the order to take effect only after the expiry of 1 yr, as mentioned in sec. 29 of the Act.

Talking, about the option of remarriage available to marriages of persons registered under SMA, one important thing that has to be paid attention is that, where the marriage has been dissolved and there is no right of appeal available, or there is no petition made for it in the required period, or appeal if presented is dismissed, then the parties may remarry, as provided by the Act.

10. The general and legal Understanding

The general understanding is that only marriages in one’s own caste is sacred and auspicious while the legal aspects of it as discussed above, doesn’t make marriages under this act any less sacred or valid. Our Law under its provisions gives the right to every citizen to marry any person of their choice and have a happy life. But this opinion is supported as well as criticized by many. Some consider it to be valid, some not. The influence of arranged marriages over the love marriage has brought about this situation, which even after judgements and laws being passed more often in this respect, hasn’t brought about a major change in the mindsets of people who are in support and opinion of marriages within the religion and caste.

Hence, the above discussed general and legal aspects of Special Marriage Act, holds high importance not only for the people who have registered their marriage under the act but also to all the citizens of the country in order to have a better understanding of the law and treat the marriages between different castes and religions to be equally sacred and auspicious like the marriages between one’s own caste. With my article I assume to have made my point on Special Marriage Act which every Indian should know, and once they know, the country will surely become a better place to live with the crimes of honor killing and torture etc. to come to an end.

© Copyright 2016, All Rights Reserved. | Powered by iPleaders | Designed & Maintained by Sourav & Team
What updates do you want to see in this article?
X
Do you need expert advice or ask questions regarding marriage? Consult an experienced family lawyer on phone for just Rs. 499. We will call you within 24 hours of payment.
Served By