The 158-year-old law which treated women as a chattel of men, which was struck down by the Supreme Court of India in 2018 as unconstitutional, is now again in news. The Ministry of Defense of India has recently filed a petition in the apex court of the country to criminalize the offence of adultery exclusively for the armed forces personnel. According to the Ministry, it will act as an assurance for the armed forces personnel performing their duty in the far-off areas and in extra-ordinary conditions that their respective spouses will not indulge in such an infelicitous activity in their absence. Now, let us first have a look at the meaning and history of adultery in India to get a better understanding on the subject matter of adultery.

The word “adultery” derives its origin from the French word “avoutre”, which has evolved from the Latin verb “adulterium” which means “to corrupt”. (Pandit 2019) In India, Section 497 of Indian Penal Code (IPC) along with section 198 of Criminal Procedure Code (CrPC) together deal with the offence of adultery.

The section 497 of IPC states, “Whoever has sexual intercourse with a person who is and whom he knows or has reason to believe to be the wife of another man, without the consent or connivance of that man, such sexual intercourse not amounting to the offence of rape, is guilty of the offence of adultery.” The maximum punishment for adultery was an imprisonment term of maximum 5 years or fine or both.

Also, according to section 198 of CrPC – (1) No Court shall take cognizance of an offence punishable under Chapter XX of the Indian Penal Code (45 of 1860) except upon a complaint made by some person aggrieved by the offence.

(2) For the purposes of sub-section (1), no person other than the husband of the woman shall be deemed to be aggrieved by any offence punishable under Section 497 or Section 498 of the said Code.

Provided that in the absence of the husband, some person who had care of the woman on his behalf at the time when such offence was committed may, with the leave of the Court, make a complaint on his behalf.

Thus, in India, the bag of adultery includes Section 497 of IPC along with Section 198 of CrPC.

The Indian society from its inception has been a male-dominated society. Women have always been considered inferior to men in Indian society and adultery being an outcome of this, emerged as a distinguishable concept in India. Extramarital relationships were always opposed in ancient India. From the very beginning, marriage in India is considered a sacred relationship which means that both the spouses would perform their obligatory duties to uphold dharma and remain faithful to each other and adultery is thus treated as a moral sin. Historically, thus adultery interfered with the “husband’s exclusive entitlements”, and it was thus considered to be the “highest possible invasion of property”, similar to theft. (R v. Mawgridge, 1706)

The ancient books of Hindu law show the discriminatory attitude and prejudice against gender. They condemned adulterous marriages and those who indulged in them, but the penalties were especially severe in the case of women. Since the purity of the caste and family was central to Dharma’s security, adultery was seen as a possible danger to society’s order and regularity, as well as to the maintenance of the name of the family and the social order. They then also placed the burden of protecting the family name and lineage more on women and the responsibility of protecting the baby bearing women on men. Adulterous relations involving married women have also been differentiated from those involving free women. The former obviously attracted a heavier sentence.

There are a variety of tales in Hindu mythology too, explaining the way in which gods themselves sometimes engaged in adulterous thoughts and acts. The tales describing the libidinous acts of some Hindu gods such as Indra and Agni with the wives of some virtuous rishis are well known. Also, it is to be noted here that on the simple accusation of potential adultery, Lord Rama exiled his wife Sita into the forests.

Manu-in the Indian mythology famously known as the first man was especially wary of the actions of women and recommended a stringent code of ethics for men to keep a watch on their women in his code law so that they would not slip into evil ways and add disrespect to themselves and their families.

All these trends and mentality of ancient India moved to modern India as well. When the Indian penal code was framed by the Britishers in 1860, it was the time when women in India were considered the property of the men and therefore the offense of adultery given under section 497 is a clear reflection of this thought.

In October 2017, Joseph Shine, an Indian-origin businessman living in Italy, filed a writ petition in the Supreme Court under Article 32 of the Constitution to repeal the law of adultery. He claimed that by only holding men accountable for extra-marital affairs, the law discriminated against men, thus considering women as artifacts. His petition said, “Married women are not a special case for the purpose of prosecution for adultery. They are not in any way situated differently than men”. The petition also claimed that the law was against Article 14, Article 15 and Article 21 of the Indian Constitution. Mr Shine also openly cited American poet Ralph Waldo Emerson, women’s rights lawyer Mary Wollstonecraft and former UN Secretary-General Kofi Annan on gender equality and women’s rights in his 45-page petition.

The matter was then put up before a 5 judge constitution bench consisting of CJI Dipak Misra, Justices Rohinton Nariman, AM Khanwilkar, DY Chandrachud and Indu Malhotra. The constitutional bench unanimously acknowledged that the archaic law certainly had many stumbling blocks within it. Some of these stumbling blocks within the law as cited in the judgement itself are as follows-

Thus, all the five Supreme Court judges hearing the case said the statute was ancient, arbitrary, and illicit and finally Section 497 of IPC along with the provisions of Section 198 of CrPC specifically dealing with adultery were struck down as unconstitutional in 2018.  Also, it is to be noted here that, the Chief Justice of that time, Dipak Mishra, cleared that adultery will still be considered as a valid ground for civil issues like divorce, though it ceases to be a criminal offence. It was also clarified that, as an exception to the judgment, Adultery can only be an offence, only if, it leads to section 306 of IPC i.e., abetment to suicide and nothing else.

As India decriminalized adultery in 2018, let’s have a look on what perspective do other countries have on the subject matter of Adultery.

There are very few countries that recognize adultery as a crime though many have retained it as ground for divorce. In India too, as stated earlier, adultery is not a crime but can be a valid ground for divorce. Some of the countries that have done away with the provisions of law (similar to Section 497 of IPC of India) dealing with adultery within their respective countries – which now stands struck down – include Japan, Austria, China, Brazil, New Zealand, Australia, Scotland, France, the Netherlands, Denmark, Germany and many more. Some of the countries which still criminalize adultery include-Pakistan, Nepal, Bangladesh, Afghanistan, UAE etc.

Also, every country has its unique law regarding the offence of adultery if they still do consider it to be an offence. Take the example of Pakistan-

In Pakistan, under the Hudood ordinance, adultery is a crime. According to this law, a woman making an accusation of rape has to provide four adult men eyewitnesses of good standing (in society) to the act of penetration as evidence to escape from the charges of adultery herself.

Thus, every country in the world has a distinguished perspective towards the offence of adultery; meanwhile, the majority opinion is towards decriminalizing it while being adaptive to the conditions of that respective country.

From the recent plea of the Indian government in the Supreme Court, it seems that the government is on the forefront to press its demand for the exemption of armed forces from the gamut of 2018 verdict. According to the government, the armed-forces provisions for adultery are gender-neutral and in no way degrades the dignity of women. Thus, under the military rule, both the male and female officers can be charged under the offence of adultery, if they enter into an adulterous relationship. Though it is to be noted here that, many lawyers and counsellors have accepted that women officers traditionally have not been provided with that kind of relief.

In the whole Army Act or the laws made thereunder, there is no offence defined as ‘Adultery.’ The Law on the Defense Service tackles the issue of ‘plural marriage’ but not the ‘adultery’ phrase. There seems to be a reference to ‘stealing the love of a brother officer’s wife’ (an offence that is just a notch below the worst offence enlisted personnel can be accused of, i.e. cowardice) in the Armed Forces in the pre-constitutional Military Manual, codified by the British, apparently even prior to the implementation of the present Army Act, 1950. It is not clear if the ingredients of the said act agree with the ingredients of the ‘Adultery’ crime as previously stated in Section 497 of the Indian Penal Code, because what constitutes ‘stealing the affections of another’s wife’ is very puzzling.

According to the Ministry of Defense, the armed forces are a “distinct class” governed by their respective army, Navy and Air Force Acts. Thus, according to the government, by the virtue of Article 33 of the Indian Constitution, the adulterous acts of the armed forces personnel should be allowed to be governed by the provisions of Sections 45 or 63 of Army Act, Section 45 or 65 of Airforce Act and Sections 54(2) or 74 of Navy Act.

According to the government, if armed forces personnel are not exempted from the ambit of 2018 verdict, it may pose, among other things, the questions of discipline and instability among the armed forces working under ‘peculiar circumstances’, away from their families for long periods of time with the likelihood of doubt in their minds over their family indulging in such an untoward activity and that this could create a bottleneck in the way of the performance of their duty.

The government also pointed out that the condition and the environment in which the army functions are totally different from that of the civilian population. Honor is indispensable to them. Thus, they ought to be provided with this security.

The Justice Nariman led bench, which was hearing the government’s plea has agreed that under Article 33 of the Indian Constitution, the armed forces can be exempted from the 2018 verdict but because 2018 was decided by a constitution bench, the government plea will now be heard by a constitution bench. The bench will now view this from a larger perspective with all its pros and cons. Though there are many laws from which the army personnel have been exempted meanwhile, there are also many special laws applied only on the army personnel. Thus, talking about the present situation, we will have to leave it on the good conscience of the honorable judges of the constitution bench who will now pronounce the verdict on the same. 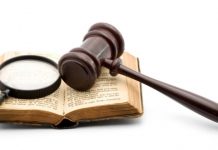