This article is written by Prerna Baiwra, pursuing a Diploma in Intellectual Property, Media and Entertainment Laws from LawSikho.

Trade dress means the shape, configuration, color combination, texture, graphic design, unique packaging, and basically the non-functional physical/visual appearance of a product making it distinctive in the eyes of consumers. A unique and distinctive trade dress allows customers to identify the products from the pool of other similar products. The concept of trade dress originated from US Legislation and made its way in Section 2(zb) of the Trademarks Act, 1999. The only test for a brand trying to protect its trade dress is to establish distinctiveness, prove whether the key elements are functional and, determine whether the trade dress has achieved secondary meaning and association with the right holder by virtue of usage. Usually, major actions in association with the common law remedy of passing off along with legislative rights in the packaging or label.

What is a trade dress?

Trade dress refers to the physical or visual appearance of a product. It includes its shape, packaging, combination of color etc. The intention of the trade dress protection is to protect the goodwill/reputation of a brand from cheap imitations and also protect buyers from buying one product under the false belief that it was another. The origin of trade dress can be traced back to The Lanham Act, a US legislation. Section 43(a) of the Lanham Act creates liability against ‘false representation’ through the wrongful use of another’s trade name. Many other countries have express provisions against trade dress infringement as well.

In India, the word ‘trade dress’ is nowhere defined under the Trademark Act, 1999. But with time the definition of Trademark got amended and the trade dress got the protection at par with international ideals. Section 2 of the Trademarks Act, 1999 now gives the following definition to include the protection of trade dress: (zb) trademark is defined as a mark capable of being represented graphically and which is capable of distinguishing the goods or services of one person from those of others and may include shape of goods, their packaging and combination of colours; (q) Package includes any case, box, container, covering, folder, receptacle, vessel, casket, bottle, wrapper, label, band, ticket, reel, frame, capsule, cap, and lid, stopper and cork; (m) Mark includes a device, brand, heading, label, ticket, name, signature, word, letter, numeral, shape of goods, packaging or combination of colours or any combination thereof.

Marketing is the backbone of capitalism. People in marketing are paid handsomely for advertising and designing campaigns to promote a product in the consumer market. With time, the trade dress or the way a product looks has gained significant importance for building a brand and has become essential for making products distinctive and essays to recall by customers. India, for example, is a culturally diverse country with people speaking different languages in every state. We also have a large number of populations who are illiterate, thus, for them, product’s physical appearance or color scheme plays more important role in identifying a brand. The importance of trade dress has also been strengthened by courts who made it clear that products are bought not just on the basis of brand name, but also on the basis of complete physical appearance, color scheme etc. Let’s look at some famous trade dress from the perspective of a consumer: 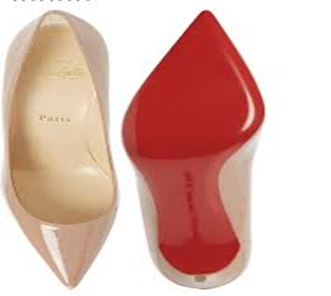 Were you able to identify the above products without seeing their brand names? Both Coca-Cola bottle shape and Louboutin’s iconic red sole have established a unique distinctiveness over time and received protection in the courts. The courts have acknowledged and upheld the rights of the original manufacturers from time to time in many decisions. 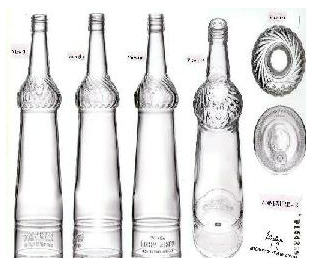 In the case of Goratschow Wodka v. John Distillers, the court emphasized on the importance of trade dress from the eyes of the consumer. In this case, one of the premium brands of vodka which has a unique bulbous shape bottle which has acquired unique distinctiveness and goodwill over the years sued John Distillers, an Indian company who presented a product called “Salute Vodka” with an identical shape as that of Goratschow Wodka. The Court agreed that the shape of the bottle presented by John Distilleries in the market is deceptively similar and that it would harm the goodwill of Goratschow Wodka. While stopping the defendant from using the distinctive shape of the bottle on similar lines as that of the plaintiff for selling their products, the court held that “the distinctive shapes of products and their packaging can be accorded trademark protection and registered as trademarks”.

From time to time, Indian courts have protected the distinctiveness of a product. In the case, Parle Products ltd v. J.P & Company (1972), J. P Company brought a product (biscuits) similar to Parle G. From packaging, color, design, and size, it was deceptively similar. The court held that both the ‘packages ought to be compared when put side by side’. The J.P biscuits will likely confuse the consumers into believing that they are buying a Parle G and hence tarnishing the Parle G’s goodwill.

In the case of Seven Towns Ltd v. M/s Kiddiland (2010), the Delhi High Court passed an interim injunction in favour of plaintiff’s trade dress and held that the question of similarity between two deceptively similar trade dresses must be highlighted in ascertaining not just the points of dissimilarity but confusion among consumers in identifying the brands. The conflict in the aforementioned case is not just on the trade dress of the Rubik’s cube being similar to the rancho (defendant) cube in terms of shape of the cube but also in terms of the labelling and packaging. The court also made it absolutely clear that no person can claim trademark or exclusive right in a single color without demonstrating that the color has with time obtained a secondary meaning, however on the other hand, it is possible to obtain exclusive right in combination of colors.

The Hon’ble Delhi High Court on September 6, 2016 in the case of ITC Ltd v. Britannia Industries Ltd passed an order of interim injunction in favour of ITC on its right to use the trade dress of yellow and blue packaging of ‘Sun feast Digestive All Good biscuits’ and stopped the brand Britannia from using the deceptively similar trade dress for its ‘Nutri Choice Digestive biscuits’. The Hon’ble High Court in the aforementioned case held that popularity need not to be ascertained by year of product in the market but by its sale trends and color combination plays an equally important role in ascertaining the customer’s choice in edible products.

However, Britannia filed an appeal against the order and on March 10, 2017 the Hon’ble Delhi Court set aside the single bench order and ruled in favour of Britannia and held that:

The observation, although case specific, identifies the importance of colour schemes in consumers’ purchasing decisions.

Another important case, Colgate Palmolive and Company v. Anchor Health and Beauty, 2003 the conflict was on the combination of red and white color. The Hon’ble Court recognized that the similar combination of colors may create a confusion in the consumers while buying the products on the origin of the product. If a person who can’t read the language written on the packaging and buys the product based on the visual appearance and it would amount to common law infringement of passing off (whether the trademark is registered or not).

Trade Dress protection can likewise be given to the state of the container of sodas, the state of the furnishings or plan of the showroom. A portion of the famous Trade dress is the state of a Coca-Cola bottle. With developing contenders, Trade dress gives another platform to make sure to secure the uniqueness/distinctiveness. The illiterate buyers can even separate the item dependent on visual appearances. The colour of the item additionally gives an item a particular character.

It fundamentally manages the appearance of the item. It is unique in relation to a brand name such that brand name manages words, logos, phrases, image and so forth, which are fixed on that item to distinguish that item from another.  Under common law, Trade dress might be secured utilizing passing off which protects organizations/companies’ goodwill and reputation.