In this article, Kashish Khattar discusses All you need to know about Fintech in India. Kashish is a 4th-year student at Amity Law School, Delhi. This article is a discussion revolving around the FinTech space and the regulations surrounding them.

You would have heard of Berkshire Hathaway’s investment into Paytm recently. According to a Livemint article, it was Warren Buffett’s first investment in the country. Berkshire invested Rs 2500 Cr in the parent company of Paytm i.e One97 Communications Ltd, this gives the company a valuation of USD 10-12 billion. Further, the Indian fintech software market is forecasted to touch USD 2.4 billion by 2020 from a current USD 1.2 billion, as per NASSCOM. The transaction value in the FinTech space was recorded around USD 33 billion in 2016 and is expected to shoot up to USD 73 billion by 2020. According to an EY report, India is just behind China in the adoption of FinTech services in the world. The adoption rates are through the roof, the EY report states that the sample in the survey done by this particular report had used 2 FinTech services in the last 6 months.

According to a livemint article, the FinTech Industry in India can be divided into 12 broad categories and they can be listed as follows:

The FinTech industry’s rapid growth can be attributed to the holy trinity of India’s Fintech revolution: The Banks, Government and Startups. Let us now analyse all these three aspects and how they helped in the exponential growth of the FinTech space in India.

Most of the sectors in the Fintech space are not yet regulated. Sectors such as P2P lending and payments systems are some of the sectors that need to be regulated on an urgent basis because they handle public money. P2P lending does not fall under the regulatory framework of the RBI. Therefore, these alternative lending entities have quite an edge over banks and financial institutions who charge higher rates of interest and demand a collateral.

However, the alternative lending platforms do fall under the Usurious Loans Act, 1918. This Act has given the power to the courts in India to intervene in cases where the interest rates are really high, which basically keeps a check on unfair rates of interest. Further, almost 22 states have different and separate acts on money lending to be complied with. Furthermore, the platforms also need to have a license from the state under the Act to carry out the business of lending.

RBI has gone ahead and regulated with some sectors of the Fintech, which mainly include the e-wallets and payment services. These entities have to be registered with the RBI under the Payment and Settlements Act, 2007. The RBI has made sure to have stringent rules and regulations regarding these. This ensures the security of the information given and the public money at large, which are basically moved around through the means of the FinTech space. Apart from these, there has not been much of regulation in any of the other sectors of the FinTech space. This does put an opportunity in the hands of the regulator and the businesses to try different approaches.

The RBI has as per its press release of 14th July 2016, set up Inter-regulatory Working Group on FinTech and Digital Banking to review and appropriately reorient the regulatory framework and respond to the dynamics of the rapidly evolving Fin Tech scenario.

There are a number of risks faced by the Fintech Companies at present. There are various new avenues that have come up due to the evolution of the FinTech revolution. You must have heard of the all the famous line that data is the new oil. The most valuable thing in the world is not a fossil fuel, but sensitive information collected by apps from its users. The more FinTech revolution spreads nationwide, the more will be the amount that they deal with. As more people go online, things like data ubiquity, data security are becoming a major challenge for the FinTech industry. A tremendous amount of data is gathered by the FinTech space, which is then analysed to gather insight into more of customer buying patterns and retention strategies. This includes a lot of personal data, including financial, health, and social data of a user. Protection of this kind of data is the need of the hour. Seamless data is another avenue which helps survive the dynamics of the partnerships formed between Financial Institutions and the Fintech space. They have provided the users with better products at better prices and have improved the existing products and services also. Another challenge that is faced by the FinTech space can be of data ownership. This kind of a risk must be overcome through a combination that consists of both technical and legal measures. Furthermore, trying to manage customer access to various solutions and services becomes a lot more complicated for the ever-increasing customer base. Options of cyber security concepts like data labelling, selective data sharing and identity-aware data shareholding can be solutions to various risk-related problems for this space.

The Fintech Space has really evolved over time with the emergence of multiple mature players especially in the payments segment and consumers giving preference to new innovative products that offer different financial services. This puts the FinTech companies in direct competition with the traditional large bank and financial corporations. The ecosystem by no doubt has shifted from a traditional competitive edge where the financial institutions introduce their own products and services to compete to more of a collaborative one. Where both the startups are looking for growth with the help of Large institutions who have been in this game for very long. And open innovation and new ideas can be adopted by big institutions. The financial institutions have realised over time that collaboration with the FinTech industry is more an effective strategy than competing with them. These institutions now even embrace the disruption that this space is creating in the financial world.

Basically, institutions are trying to blend existing technologies offered by the FinTech space in their operations or are developing their own innovative solutions in partnership with various startups. Partnering with a FinTech startup allows the institution to effectively outsource their research and development and develop services that can be introduced and brought to the market quickly. Which in term also makes them gain access to different technologies that can build solutions for bigger and better problems they may face in the future. The FinTech scene benefits from this partnership with the access to the large customer base of financial institutions as well as their management and deployment capabilities. Collaboration makes sense for startups as they have to compete in the marketplace where a lot of similar services are already being offered by major telecom or public sector players.

The methods by which Indian financial institutions use while working with new FinTech technologies can be summarised as follows:

(i) Supplementary Offering – Use of new or existing subsidiaries to offer new services;

(ii) Partnerships – where both the parties develop solutions together;

(iii) Acquisitions – of various startups and enhancing their value;

(iv) Incubation – Where you run startup programs to incubate companies relevant to the market they are involved in;

(v) Investing – Setting up of venture funds to invest in the FinTech space; and

(vi) Bridge makers – Bridging the gap between demand and supply by curating the best business ventures to meet the needs of the market.

The road to collaboration is not an easy one, there are a couple of hurdles that have to bridged by both the parties to come up to a suitable solution. The obstacles arise from the new challenging the old, the different business models of both the businesses, a difference of the culture between both the places. Institutions have a problem because of their slow adoption of change and innovation, their slow acceptance to disruption in the market. The difference also arises in terms of goals where FinTech wants to bring in new levels of efficiency in what they do, whereas Institutions have to go slow and steady as they have to take care of the whole range of products and services required in the transaction. However, these challenges can be overcome and make way for a highly promising future for both the FinTech space and the financial institutions. Opportunities for collaboration and growth will only grow over time and there will be so much room for innovation and disruption. 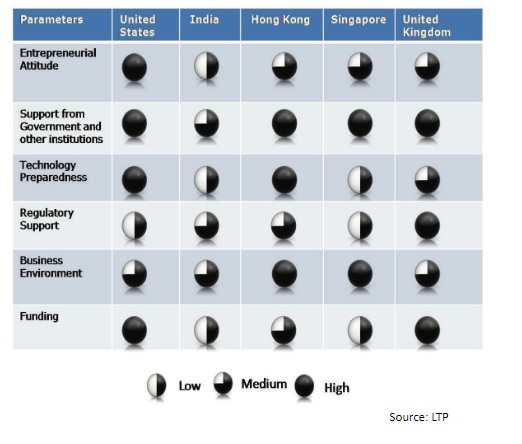 India needs to regulate, invest, and promote its business, startup environment only after which it can emerge as a startup haven. It has got a huge potential to change into a developed economy. FinTech space has made use of new technologies and disruptive approaches to come up with better and innovative products. This trend is expected to continue and go bigger in the coming years. Banks will go through a revolutionary change with AI and MI in the centre of all the disruption that will happen in this sector. Wealth management which consisted mainly of high net worth individuals now has room due to cheaper services to advise more customers in the coming times. There is automation in Corporate and Investment Banking, which has led to cost reduction and improved efficiency in all major banks. India is on the cusp of the FinTech revolution, accelerated in part by the Government’s policy initiatives and development of the Indian Stack. India’s vast underbanked and new-to-bank population makes it the most exciting opportunity place to be in right now. It is now to be seen as to how the FinTech revolution is going to change the habits and behaviour of the Indian population.