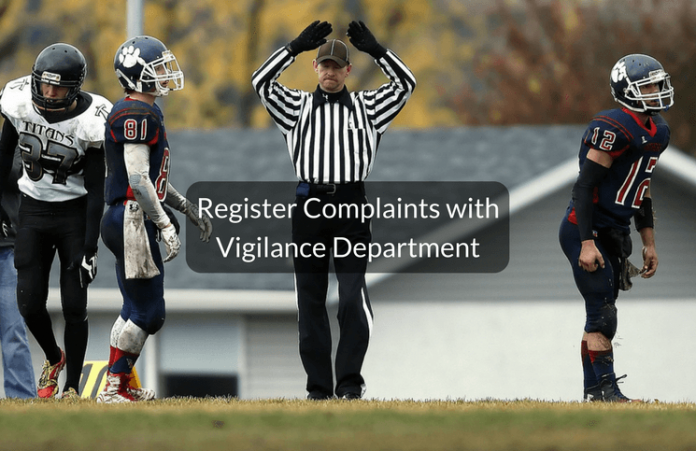 In this blog post, Dheerajendra Patanjali, pursuing M.A. in Business law from NUJS, Kolkata, explains how to register complaints with vigilance department against a government officer.

In the present era of the welfare state, most of the decisions are taken by the officers appointed by the government – colloquially known as government officer – and hold a position in various capacity.

In late 60’s, government set up a committee – committee on prevention of corruption, under the chairmanship of Mr. K Santhanam (popularly known as Santhanam Committee) to suggest the measures to contain the corruption in the government organization.

Based on the recommendation of the committee, government of India by a resolution dated 11.2.1964 set up the Central Vigilance Commission to act and advise government on anti-corruption measures.

The commission got fresh teeth consequent upon the judgment of the Hon’ble Supreme Court in the famous case of Vineet Narain vs. Union of India[1].

In this case, apex court laid down guidelines to ensure independence and autonomy of Central Vigilance Commission (CVC), intended to be free from executive control or interference. Subsequently, the CVC Bill was passed by both houses of Parliament in 2003 and the President gave its assent on 11th September 2003.

Thus, the Central Vigilance Commission Act, 2003[2] came into effect from that date. The Act exclusively deals with the matters of corruption, bribery, misconduct and misappropriation etc. involving public servants of central government and central PSU.

Further, primary responsibility for maintenance of purity, integrity and efficiency in the organization vests in the secretary of the ministry or the head of the department or the chief executive of the public sector enterprises.

Such authority, however, is assisted by an officer called the Chief Vigilance Officer (CVO) in the discharge of vigilance functions. The CVO acts as a special assistant/advisor to the chief executive and reports directly to him in all matters relating to vigilance. He heads the vigilance division of the organization concerned and provides a link between his organization and the central vigilance commissioner and his organization and the Central Bureau of Investigation.

Additionally, it has been provided that big departments/organizations should have a full-time CVO, i.e. he should not be burdened with other responsibility.

Thus, central vigilance commission acts as the apex organization for exercising general superintendence and control over vigilance matters in administration and probity in public life as far as government servants working at the disposal of central government or employee of central PSU are concerned.

Filing of Complaint with Vigilance Department

Before dwelling into the various modes of filing complaint with vigilance department, it is important to recognize that the right of a private citizen to file a complaint against a corrupt public servant is a very important and vital right.

When a private citizen approaches a vigilance establishment against a corrupt public servant, what is at stake is not only a vindication of personal grievance of that citizen but also the question of bringing orderliness in society.

When a private citizen approaches a vigilance establishment against a corrupt public servant, what is at stake is not only a vindication of personal grievance of that citizen but also the question of bringing orderliness in society. This requires special recognition in the whole system.

Further, any petitions containing allegations of corruption and malpractices by government servants are usually addressed to one of the three authorities, viz –

Information about corruption, malpractice or misconduct on the part of public servants may flow to the vigilance authorities from any of the following sources:

In this process, complaint is received by the vigilance department in two ways –

A complaint is lodged basing on the grave anomaly in the submitted annual property statements. In this way, the assets declarations of earlier years are duly examined.

Employees who are bound by the conduct rules of the department may face charge against him if something adversely is observed as far as conduct rules are concerned.

Report of irregularities, e.g. tampering with records, over-payments, misappropriation of money or materials etc may also cause vigilance department in action.

Audit reports of the organization may cause vigilance department in action against an employee if some adverse opinion is observed.

This is another source of registering.

Vigilance department may come into action taking cognisance of the report appearing in the press.

Inputs gathered by the investigating agency may lead to registration of vigilance complaint.

Complaints about state government employee placed at the disposal of state government are made with state level vigilance establishment and modes of accepting complaint are almost similar with the modes prevalent against the central level employee and mentioned above.

Although, at a certain establishment, various riders are applicable with respect to monetary limit or grade of the employee but the ways of entertaining complainant and acting thereon are broadly similar.

However, in respect of All-India Service Officers, heads of departments and collectors, in which case the petitions will invariably be forwarded to the chief secretary to the government straightaway, for necessary action, without conducting any form of enquiry[7].

An employee of government undertakings, PSU, corporation or regulatory bodies are also subject to the jurisdiction of central vigilance commission and the modes of acceptance of complaints are similar to that of the employee of the central government.

Although, the charges against the employee of a lower grade is primarily dealt in the organizational set up itself while charges against higher officials are directly dealt by the central vigilance commission.

The Central Vigilance Manual specifically prescribes the way in which a complaint may be received.

A complaint against an employee of a public sector enterprise or an autonomous organization may be received in the administrative ministry concerned and also in the central vigilance commission.

Complaints about the officials who are working under public undertakings corporations and all the companies of state government registered under the Indian Companies Act come under the preview of state level vigilance establishment/commission. The mode of acceptance and dealing of received complaint is similar to that of the central level organization.

The processing of received complaint – both at the central level and the state level, duly taking into account the place of working of the employee against whom charges are made – undergoes various levels of scrutiny.

Ordinarily, each complaint will be examined by the chief vigilance officer to see whether there is any substance in the allegations made to look into.

It is important to note that although there is a robust mechanism provided in the CVC Act and various supporting manuals are released by the vigilance department, the treatment of anonymous complaint stands at completely different footings.

The CVC in its manual specifically provides that –

No action is to be taken by the administrative authorities, as a general rule, on anonymous/pseudonymous complaints received by them.

When in doubt, the pseudonymous character of a complaint may be verified by enquiring from the signatory of the complaint whether it had actually been sent by him.

If he cannot be contacted at the address given in the complaint, or if no reply is received from him within a reasonable time, it should be presumed that the complaint is pseudonymous and should accordingly be ignored.

However, if any department/organization proposes to look into any verifiable facts alleged in such complaints, it may refer the matter to the commission seeking its concurrence through the CVO or the head of the organization irrespective of the level of employees involved therein[9].

That is to say, if a complaint, notwithstanding its procedural completeness, is made anonymously then, the competent authority is not supposed to take cognisance mandatorily over it.

Need for the Previous Sanction for Prosecution

It is important to note that Prevention of Corruption Act 1988[10] prescribes that previous sanction is necessary to proceed against the public servant. As per the provisions of the Act, a sanction is to be given by the government or the authority which would have been competent to remove the public servant from his office at the time when the offense was alleged to have been committed. However, there have been several instances of delayed sanction even in befitting cases of prosecution.

This sorry state of affairs made Justice Ganguly to observe – in the famous case of Dr. Subramanian Swamy vs Dr. Manmohan Singh and others – that –

“All proposals for sanction placed before any sanctioning authority empowered to grant sanction for the prosecution of a public servant under section 19 of the P.C. Act must be decided within a period of three months of the receipt of the proposal by the concerned authority……At the end of the extended period of time limit, if no decision is taken, sanction will be deemed to have been granted to the proposal for prosecution[12]…”

A complaint lodged by a complainant, duly following the prescribed procedure, can be traced at any time as for the complaints sent for investigation & report the commission conveys a key number to the complainant by which he/she can see the status of his complaint on the web-site.

However, while seeing the status on the website, the complainant should keep the following time frame in mind –

Commission will not entertain further correspondence in the matter but will ensure that the complaints are investigated and action is taken to its logical conclusion[13].”

Complaints which are sent for necessary action can be followed-up by the complainant with the respective organizations. CVC does not deal with such complaints further.

Above analysis of the various modes of filing complaint with vigilance department suggests that although a wide way of submitting complaints by the interested parties have been provided, however, leveraging technological advancement in receiving complaint may serve the purpose effectively.

For example, vigilance department of Air India[14] has come out with a unique solution, duly leveraging modern technology and allowing the aggrieved person to register the complaint by calling on a dedicated phone line.

If a complaint against a public servant is found to be malicious, vexatious or unfounded, it should be considered seriously whether action should be taken against the complainant for making a false complaint.

“Whoever gives to any public servant any information which he knows or believes to be false, intending thereby to cause, or knowing it to be likely that he will thereby cause, such public servant:

Thus, there is a robust mechanism to protect government servant from being harassed unnecessarily by filing a false and frivolous complaint. Such false and frivolous filing results into setting relevant criminal laws in motion against the complainant.

Highest standard of a professional conduct and ethics is the greatest asset of all the public functionaries. The cumbersome task of eliminating/regulating the cancer of corruption has remained to be major concern.

To achieve this goal, various Vigilance Establishment, both at central and state level has been established. The vigilance establishments have been constituted for the purpose of enquiring into the allegations or complaints against the government servants falling under their jurisdiction.

Of late, it is felt that the process adopted and the methodology used, although very exhaustive in nature, by these establishments does not yield quick and effective results. These cells have not been able to achieve the desired deterrent effect and earn confidence of the litigating public.

Furthermore, to approach the vigilance establishments and set it into motion is also a crucial task as not all complainants are blindly entertained by these organizations. These organizations take into account only those complaints that fulfill the criteria so prescribed.

I hope the article helped you to get in-depth knowledge about how to file complaint with the vigilance  department against a government official. Drop a comment below & feel free to share.