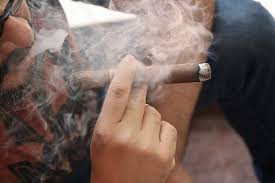 In this article, Sachin Vats of Rajiv Gandhi National University of Law, Punjab discusses the punishment for smoking on roads or other public places.

Is smoking on open roads or other public places legal in India?

Smoking is the habit or action of inhaling and exhaling the smoke of tobacco or a drug. The rate of increase in disease and death due to active smoking is on rise. But, apart from this people who do not smoke are suffering with the ill effects of smoking in passive way. The inhalation of Secondhand Smoke (SHS) or Environmental Tobacco Smoke (ETS) by the persons causes “Passive Smoking” which is equally injurious to health. The rise in air pollution is a major concern for the global world. The world is fighting with the problems like smoking and drug related issues.

Passive Smoking is one of the major motivation behind making of smoke free laws. Why should a person other than the intended active smoker face any problem? The passive smoking also causes dangerous diseases like cancer, permanent disability and even leads to death. So, the people who smoke should think about its consequences on other people. The Constitution of India has provided to the people six fundamental and various other Rights. People always raise their voice if any of their rights get violated. But, do we really care about our fundamental duties that we must do as a citizen of India? The Article 51A Part IV  of the Constitution of India states different fundamental duties incorporated under 42nd Amendment in 1976. The 86th amendment done in 2002 provides 11 fundamental duties to be done by every citizen of India. I am discussing about fundamental duties of our citizen because even after having legislation for different purposes it depends upon us to make it successful.

“Section 4 of the Cigarettes and Other Tobacco Products Act (COTPA) describes about Prohibition of Smoking at Public Places which is applicable from 2nd October, 2008”

“India became a party to the World Health Organisation Framework Convention on Tobacco Control on February 27, 2005.”

What is Public Place

Public Place is defined as any place where public has access. It does not matter that the place is right or not. It includes all the places visited by the public such as auditorium, hospital, railway stations, public offices, courts, educational institutions, libraries, canteens, banks, clubs. It also includes the open spaces such as premise of the hotels and restaurants.

Instructions for the Public Places

The public places must display a sign of “No Smoking” on a board. The size of the board should be 60 cm in length and 30 cm in width. The background of the board must be white in colour and all the other specifications must be followed. The board must display a warning “No Smoking Area- Smoking here is an offence”. The warning should be given in English language and one Indian language according to the respective location. The board must be displayed at the entrance of the public place and other prominent places of the building. If the public place has more than one gate then the board will be displayed on each entrance gate. The public building consisting of different floors will contain the display board on all the floors including at the staircase and lifts.

The name of a designated officer must be notified and displayed on the board to whom the complaint will be made if someone is violating the law by smoking at public place. The keepers of the public place must ensure that no ashtrays, matches, lighters or any other thing which can facilitate smoking are provided at the public place.

There cannot be any smoking place in public places as all the public places have to be smoke-free. But, there are some provisions under which a smoking area can be provided by the owners, proprietors, manager, supervisor or the person in-charge of affairs at places like hotels and restaurants. The hotel must contain more than 30 or rooms and the restaurant should have seating capacity of 30 or more than 30 people. The service of smoking area at any airport can also be provided to the passengers by the manager of the airport but some specific guidelines for that have to be followed.

The smoking area made at any public place must be used only for the purpose of the smoking. The area cannot be used for providing any other services to the customers. The smoking area cannot be made at any entrance or exit gate of the hotel, restaurant and airport. The area made for smoking must be distinctly marked and a board displaying “Smoking Area” in English and any one Indian language as applicable must be there at the entrance gate.

The area made for the smoking must be fully four-walled and separated from the main building. The entrance gate must have automatically closing doors and the building should have a good airflow system which directs air towards outside and it must not mix with any other buildings nearby. The building should have an exhaust ventilating system and air cleaning system. They should be installed in such a manner that air should not permeate into the non-smoking areas of the building.

The Public Places without the signage of the board of “No Smoking” is considered as violation under under the Cigarettes and Other Tobacco Products Act. The public place should not provide the people ashtrays, lighters, matches and other things to promote or facilitate smoking activities. If any smoking area is found on the entrance or exit gate of the public place then the designated officer or the supervisor of the place will be held liable for the violation of the COTPA under section 4. If the manager provide any service in the smoking area other than smoking then it will be violation of section 4. The improper air flow system in the smoking room makes the concerned person liable under this Act. If smoking is done at any public place other than the hotel and restaurants consisting more than 30 rooms and seating capacity respectively then then it will be violation under this section. The name of Designated Officer must be displayed at different positions at public places to whom any complaint can be registered.

All the offences which are Punishable under COPTA are bailable. The cases are tried in accordance with the Code of Criminal Procedure, 1973. The wrong done under this COTPA is taken as Compoundable and tried according to the provisions of the summary trials.

There is a provision for the Fine of Rs. 200 if anyone is found smoking at public places. The Government has put up an Amendment Bill in the Parliament where it has been raised  upto  Rs. 1000. It has also been decided by the Health Ministry that the minimum age for buying tobacco related products is 21 which was earlier 18 and the same has been incorporated in the amendment bill.

Public smoking was made illegal in the history of world first by a Division Bench of Kerala High Court in 1991. The High Court stated that smoking at public places violates the Article 21 of the Constitution and hence unconstitutional. The first city in India to become smoke free was Chandigarh and the man behind the success of Chandigarh was Hemant Goswami. Other cities such as Shimla also followed the Chandigarh model to become smoke free city.

According to a report published by the medical journal “The Lancet” around 11% death in the world are caused due to smoking. The majority of people are dying out of smoking belong to China, India, Russia and USA. The report of the Global Burden of Disease Survey shows that India has around 11.2% smokers in the world. Smoking is the second largest reason for early death and disability so it is a major point of concern for all the countries across the globe.

The demand of removal of designated smoking zones from hotels, restaurants and airports is also on rise and the recommendation has been accepted by the government. The Indian women rank second in the global list of top countries having women smokers.

Cigarettes and other Tobacco Related Act.