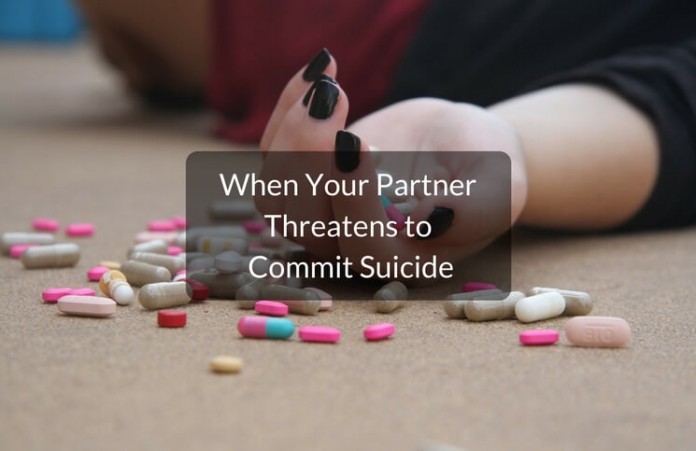 In this blog post, Anubhav Pandey talks about the procedures to apply in case your wife or girlfriend threatens to commit suicide.

Using law as a tool to coerce, extort or blackmail others is in itself an unlawful act. In today’s scenario, laws which were enacted for the purpose of gender equality are being misused by few.

Legal Recourses To Threats by Wife or Girlfriend of Committing Suicide

Before starting anything legal, first recourse should be a peaceful talk and by working on the problem mutually. If the solution is not found by this recourse, do follow the recourses given below.

When one threatens another with an injury to reputation, with the intent to cause alarm to that person and forces him to do what he is legally not bound to do, this is called criminal intimidation.

It is a threat to harm reputation, property or the person himself and cause of action of these threats are often unlawful.

What To Do With Such Threats

On the other hand, if she does not leave any note but her family and friends in their statement give your name as the cause of your partner’s suicide then also you will be in trouble.

An illustration to further explain the provision in a case –

When X demanded the amount (which he lent to the defender of the case) from Y, Y threatened that he would commit suicide by stabbing himself. This amounted to an intention to cause alarm to X, desisting him to take any legal action against Y, for which he is entitled to do legally for recovery of the amount collected.

Cruelty comprises of both physical as well as mental cruelty. It was formerly thought that actual physical harm or reasonable apprehension of it was the prime ingredient of this matrimonial offense. That doctrine is now repudiated and the modern view has been that mental cruelty can cause even more grievous injury and create in the mind of the injured spouse reasonable apprehension that it will be harmful or unsafe to live with the other party.

The principle that cruelty may be inferred from the whole facts and matrimonial relations of the parties and interaction in their daily life disclosed by the evidence is of greater cogency in cases falling under the head of mental cruelty. Thus mental cruelty has to be established from the facts.[1]

Cruelty for the purpose of divorce is to be taken as behavior by one spouse towards the other which causes a reasonable apprehension in the mind of the latter that it is not safe for him or her to continue the matrimonial relationship with the other.[2]

If the multiple and regular threat of committing divorce is given by the wife, though wife does not have the intention to commit it, this will amount to mental cruelty and a valid ground for divorce.

Additional Read: What amounts to Cruelty against Men?

When girlfriend creates a scene by shouting loud in the locality or when she invites others and cries her sorrow in front of others at the same time threatens to commit suicide, one can file for defamation cases. Defamation is when harm is done to the reputation.

Going for civil or criminal defamation is one’s personal choice. There are certain requirements to be fulfilled to establish defamation.

Threat to Commit Suicide and Extortion of Money

There are situations where wife or girlfriend threatens to commit suicide on non-signing of some contract or non-delivery of an object. What to do in such cases of threats? How to deal with such contracts signed under coercion?

Coercion is doing an unlawful thing as mentioned in IPC and getting a contract signed. Therefore, when wife or girlfriend threatens to commit suicide unless the boyfriend or the husband signs a contract. A threat to commit suicide is indistinguishable from one to attempt to do so and that such an attempt is forbidden by Section 309 I. P. C, which penalizes it.

Suppose there are two sisters, Hazy and Dazy. Hazy is married to Mr. X. Hazy took a loan from Dazy and could not return it. To pay her back, Hazy threatened X to either sign the gift deed and gift the house to Dazy or else she would commit suicide. Therefore, out of coercion, Mr. X gave his assent. Will the property pass in such case?

The answer is No. The threat to commit suicide, although, not a specific offense as per the provisions of IPC but still, the spirit of code does not support it either. Therefore, by doing an unlawful act one cannot force the other to enter into a contract.

What To Do When Threat to Suicide Converts to Reality

Before taking any such steps, the person committing suicide will definitely leave a note or clue as to the reason behind the suicide. In a case where a young woman committed suicide soon after her marriage. She was unhappy with the income of her husband and often threatened him to buy her jewelry else she would commit suicide. One day she drank poison putting the blame on her husband and left a note behind. In such cases, police will register a case of abetment of suicide against you. Therefore, one should handle the situation very wisely.

Most of the cases follows with severe negative impacts. In fact, on such situations, one should insist the wife for a psychiatric check-up. This move should be made the other way round, in spite of telling your wife or girlfriend to go for a check up, one should insist her to accompany to a psychiatrist together for a mutual family dispute resolution session.

Giving up of threats of wife or girlfriend might be beneficial and work for a short term but this will not work in a long term. You will not be able to live in a relationship, foundation of which is based on coercion and blackmail. If you know you are not wrong then, do not give-in to unnecessary threats.

Statistically, girls who threaten to commit suicide generally are not the one who do it. But who knows about tomorrow. If in situations where she commits suicide and leaves your name as an abettor behind, you might land into some serious trouble. Therefore, it is required of you that on such threats, one must give a complaint of the situation and should mention of the suicidal tendencies of the wife or girlfriend.

It’s very normal to get threats from your partner or wife/girlfriend in case he/she is not happy with you or is not getting the desired. In such a case, just take a deep breath & follow the instructions stated in the post.

Do you’ve a better way to deal with it? Comment Below. And yes, don’t forget to share.