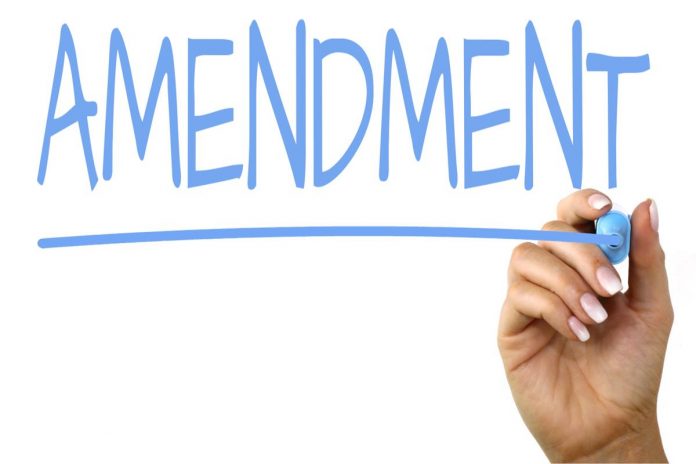 This article is written by Astitva Kumar, an advocate. The article is the result of extensive research and analysis on the procedure for amending the Indian Constitution, as well as a detailed examination of Amendments 100, 101 and 102.

A Constitution is a country’s supreme law. Considered the father of political science, Aristotle, in his book, ‘politics’ defines Constitution or polity as the organization of a polis in respect of its offices generally, but especially in respect of that particular office which is sovereign in all issues.

Amendments in the Indian Constitution

The Indian Constitution is the document and related procedures that form the Republic of India’s primary organizing principle. On January 26, 1950, it went into effect. The country is described in the Constitution as a “sovereign socialist secular democratic republic.” It established India as a parliamentary democracy with the Union (central) government and state governments sharing power. Austin describes the Constitution as “something which establishes the ultimate government’s framework.”

As a result, the Constitution determines:

To be a living document, a Constitution must be capable of adapting to socioeconomic changes when the society so wants. The Constitution should not be too strict to prevent meaningful amendments, nor should it be too flexible to make the Constitution a toy in the hands of politicians.

Globally, all Constitutions are believed to grow and expand over time as our society’s situations, needs, and values change. Missouri v. Holland, 252 U.S. 416, 433 (1920), is the locus classicus of the metaphor of the living Constitution, in which Justice Holmes compared the Constitution to an “organism” and argued that the words of the text “have called into life a being the development of which could not have been foreseen completely by the most gifted of its begetters.”.

In Sajjan Singh v. The State of Rajasthan (1964), the definition of the phrase ‘amendment’ was sought to be explained for the first time. The Court ruled that a provision of the Constitution may be amended by deleting one or more of its provisions and substituting new provisions in their place.

Procedure for amending the Constitution in India

Article 368(2) of the Indian Constitution governs the procedure for amending the Constitution.

Amendment by a simple majority

Certain provisions of the Constitution can be altered by a simple majority (i.e., more than 50%) of the total members present and voting. This category can be altered to allow for the admission of a new state under Article 2, Schedule IV, and Article 11.

Some Articles in the Constitution can be amended by a special majority (i.e., 66%) of not less than two-thirds of the members of that House present and voting.

The Amendments envisioned in Articles 410, 169, para 7(2) of Schedule V, and Para 21(2) of Schedule VI fall into this category and are expressly excluded from the purview of Article 368, which is a specific provision in the Constitution dealing with the power and procedure for the constitutional amendment.

Article 368 states that if the amendment attempts to change ‘certain specific elements of the Constitution’, it must be ratified by a special majority (66%) in Parliament, following that, at least half of the state legislatures must ratify it. When this procedure is completed, the Bill is forwarded to the President for his assent.

Following India’s split in 1947, the subject of border division between India and Pakistan was referred to the Supreme Court of India for decision. The Court concluded that transferring the land would necessitate a constitutional amendment. The Ninth Amendment to the Indian Constitution, concerning the division of Pakistan’s borders, was based on the Supreme Court of India’s advisory judgment issued in 1959.

Following Bangladesh’s independence from Pakistan in 1971, India and Bangladesh worked together to resolve the two countries’ territorial boundary dispute. On March 19, 1972, in Dhaka, the Prime Ministers of Bangladesh and India, Sheikh Mujibur Rahman and Indira Gandhi signed a Treaty of Friendship, Cooperation, and Peace for a term of 25 years, extendable by mutual consent. This agreement was the first step towards resolving the border dispute. The two countries’ Prime Ministers signed the Land Boundary Agreement in 1974.

The assassination of Bangladeshi President Sheikh Mujibur Rahman in 1975 hampered the implementation of the 1974 accord. After multiple discussions between the leaders of India and Bangladesh, India and Bangladesh eventually resolved to execute the 1974 Land Boundary Agreement on June 6, 2015, four decades later. To assist the agreement’s implementation, India modified its Constitution. The 2015 LBA was signed on June 6, 2015, in Bangladesh. The historic deal permitted the handover of 111 enclaves totalling 17,160.63 acres from India to Bangladesh. India, on the other hand, gained 51 enclaves totalling 7,110.02 acres in Bangladesh. Prior to this landmark agreement, the 2011 Protocol signed by Manmohan Singh of India and Sheikh Hasina of Bangladesh agreed to preserve the status quo in dealing with the issue of adverse possessions of land, with India receiving 2,777.038 acres from Bangladesh and transferring 2,267.682 acres to Bangladesh.

The 2011 Protocol was developed in collaboration with the state governments of Assam, Meghalaya, Tripura, and West Bengal, however, it was unable to be implemented due to bad political conditions. Thereby, the 2015 LBA addresses the unsettled issues stemming from the approximately 6.1-kilometre-long land boundary in three sectors: Daikhata-56 (West Bengal), Muhuri River–Belonia (Tripura), and Lathitila–Dumabari (Assam); exchange of enclaves; and adverse possessions, which were first acknowledged in the 2011 Protocol.

The establishment of the Goods and Services Tax regime by the One Hundred and First Amendment to the Constitution marks a watershed milestone in the history of cooperative federalism.

Article 366(12A) defines the term goods & services tax. It refers to any tax on the supply of goods, services, or both, except taxes on the sale of alcoholic beverages for human consumption.

The introduction of the Goods and Services Tax (GST) is a big step forward in India’s indirect tax reforms. By merging a significant number of Central and State taxes into a single tax, GST will significantly reduce the negative consequences of double taxation and lay the groundwork for a common national market. The main advantage for consumers would be a reduction in the overall tax burden on goods, which is expected to be between 25% and 30%. This would also mean that the consumer would be far more aware of the true cost of indirect taxes on goods and services. Due to the full neutralization of input taxes across the value chain of production and distribution, the introduction of GST would make Indian products competitive in both domestic and international markets. Last but again not least, this tax would be easier to administer due to its transparency and self-policing nature. It would also promote a transition from an informal to a formal economy.

Article 246 of the Indian Constitution divides legislative powers, including revenue, between the Parliament of India and the State Legislatures.

The Constitution divides fiscal authorities between the Centre and the States, with essentially no overlap between the two spheres. The Centre has the authority to tax the manufacture of commodities (except for alcoholic beverages for human use, opium, drugs, and similar substances), while the States have the power to tax the sale of goods. In the context of inter-state sales, the Centre has the authority to impose a tax (the Central Sales Revenue), but the tax is wholly collected and held by the originating states. In terms of services, only the Centre has the authority to charge service tax. Because the states lack the authority to levy taxes on the sale or purchase of products during their importation or exportation from India, the Centre imposes and collects this tax in supplementary to the Basic Customs Duty. This customs duty (also known as CVD and SAD) offsets excise duty, sales tax, state VAT, and other taxes levied on similar domestic products. The introduction of GST demanded constitutional adjustments to allow the Centre and the States to tax and collect GST at the same time.

The GST Bill was initially introduced in India in the 16th Lok Sabha in 2014. The Lok Sabha passed the Constitution Amendment Bill in May of 2015. The Bill was finally passed in the Rajya Sabha in August of 2016, with some revisions. Furthermore, the Bill was ratified by the required number of states and gained the President’s assent on September 8, 2016, resulting in the 101st Constitution Amendment Act, 2016. With effect from September 12, 2016, the GST Council has also been established. The GST Council is directed by a Secretariat. In order to facilitate the smooth implementation of the GST, numerous committees and sectoral groups composed of members from both the Centre and the States have been constituted.

Important provisions of the Bill:

The Constitution was amended to include Articles 246A, 269A, and 279A. The Amendment makes revisions to the Constitution’s 7th Schedule.

This Article states that:

Key aspects of Article 269 A

Key aspects of Article 279-A

The Article requires the President to form a GST council within sixty days of the act’s enactment. The GST council will be comprised of the following individuals:

Imports of goods or services would be considered inter-state supplies and subject to the Integrated Goods and Services Tax (IGST) in addition to the applicable customs charges.

The 102nd Amendment Act was approved by the President and came into effect in August 2018.

The Amendment also brings about changes in Article 366 of the Indian Constitution.

This Amendment gave the NCBC constitutional status. The Commission was originally set up in 1993.

“We have full and detailed Constitution …it depends ultimately on the people … and more especially on those in positions of responsibility … Thus, the element of cooperation, of seeking friendly counsel with each other and of ever keeping the larger end in view, are of paramount importance.”   -Jawaharlal Nehru

The purpose of this article was to emphasize the importance of the Amendment provision in the Indian Constitution and to critically examine the100, 101 and 102 Amendments.

The Indian Constitution is believed to be of the Euro-American tradition in the family of Constitutions. In terms of its length, early constitutional writers expected that it would rise to legalism and rigidity. Fortunately, this did not occur, and the Constitution, as envisioned by its authors, has proven to be highly adaptable and has garnered some favourable comments from some foreign scholars.

Thus, for a written constitution such as India’s, the Amendment is an absolute necessity, and its relevance inside the body of a constitutional document is as great, if not greater, than the document itself. The development of a Constitution is a difficult and time-consuming task, and its building in a form acceptable to the people, particularly future generations, is nearly impossible. In this regard, Sir Ivor Jennings puts it succinctly: “… The framers of the Constitution can’t foresee the conditions under which it will apply and the issues that will develop. They do not have the gift of prophecy.” In other words, no amount of drafting competence can be anticipated to prevent the need for revising and developing a Constitution to accommodate the unexpected and unforeseeable. To address the needs of the people, it is therefore vital to include an amending clause in the framework of a constitutional instrument.

25th Amendment of the Indian Constitution