Indian religions like Hinduism, Buddhism and Jainism have always preached kindness and compassion to animals. Despite such rich culture and heritage, animal cruelty is rampant and common place in India. In today’s world of consumerism, animals are soft targets for anyone trying to make a quick buck and the animals thus fall to this exploitation. The government came up with The Prevention of Cruelty to Animals Act, 1960 (PCA) to rescue the animals from such exploitation and numerous statutory bodies have been setup, but still the pace of animal welfare and protection is moving at snails pace.

Below we take a look at various issues plaguing animal welfare in India.

Animal organisations after completing Animal Birth Control surgeries often release dogs into a neighbourhood different from where they were picked. These dogs are weak after the surgeries and after being placed in a new area are quite vulnerable to attacks by existing community dogs. These attacks can at times be fatal. Recently Animal Welfare Board of India (AWBI) has issued an advisory to the state governments to stop using new battery cages and phase out existing ones by 2017.  India is the third largest producer of eggs with 70% of the produce sourced from commercial poultry farmers. They confine the hens to battery cages where each bird has a space less than an A4 sheet of paper. This is a clear violation of the PCA Act which requires caged animals to be provided reasonable opportunity of movement.

India’s Union Health Ministry recently adopted draft rules imposing a nationwide ban on testing cosmetics on animals. Bureau of Indian Standard rules were revised to establish the ban. But there is still a loophole under which animal tested products can be imported in the country. An import and sales prohibition of such products also needs to be in place. Drug Technical Advisory Committee, the highest health advisory body in India has recommended banning such products. PETA had earlier obtained an undertaking from Air India where the airline stated that it would refuse to transport animal to laboratories. But now Air India has backtracked after bucking under pressure from animal experimenters.

Last year the Indian Government announced that it will not allow building of dolphinariums in India and they will be banned altogether. Dolphins survive poorly in captivity and are subject to stress, aggression from pool mates and premature death. India lists all whales and dolphins in the schedule of its Wildlife Protection Act, prohibiting their killing and capture.

Today the Indian dairy industry is growing at a brisk pace but still is not able to meet the market demand. Majority of cattle breeders use Oxytocin, a schedule H drug, despite its use being illegal. The drug is used so that the cattle can produce large quantities of milk. Its side effects make the cattle suffer severe stomach cramps that feel like labour pains. It acts as a slow poison after regular consumption and with passage of time gives rise to different diseases. Naturally a cow lives up to 18 years but because of being milked day and night it lives only for 6 or 7 years and is later sent to slaughter houses for their meat and skin.

In India it is technically illegal to kill healthy, young cattle. Butcheries have found a way around this and they deliberately maim healthy animals so that they can declared fit for slaughter. Horrors include their throats being slit in full view of other animals and being skinned alive. Despite the central government directives regarding animal welfare, little has been done on the ground. 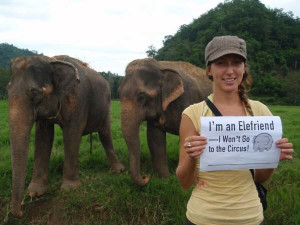 Recently PETA carried out an inspection of elephants in Jaipur which showed widespread and rampant abuse of captive elephants used for tourist activities. After the findings were shown to Animal Welfare Board of India (AWBI), it withdrew its permission to use elephants in the annual elephant festival leading to the cancellation of the event.

Despite a directive from the Ministry of Environment and Forests instructing educational institutions to follow UGC guidelines for ending animal dissection and experimentation, University of Delhi forces students to dissect animals. This is happening despite the fact that there are virtual dissection software available.

After receiving complaints of ill treatment of animals in circuses, Central Zoo Authority and AWBI recently issued show cause notices to 16 circuses. The notice stated that it is considering withdrawing the recognition of circuses as a ‘captive animal facility’, thereby making it illegal for the circuses to keep wild animals.

All these incidents above illustrate that though there has been some development with regard to animal welfare but the apathy of government officials is slowing down the pace. There is no synchronisation between various government departments. Whatever little the government does is after being constantly nagged and pushed by various animal rights organisations and activists. Also the role of Indian Judiciary needs to be complemented for waking the government from their slumber on the issue of animal welfare.

Maybe the government does not consider this as an important issue because there is hardly any pressure on them to do so. It is only when the people will raise their voice en masse, the government will be forced to take some concrete action rather than merely offering lip service.

The government needs to be proactive and take suo moto action whenever they come across cruelty to animals. The PCA Act requires the state governments to setup Society for the Prevention of Cruelty to Animals (SPCA) in every district, but animal activists allege that barring a few almost every other SPCA is ineffective.

Mindless cruelty to animals is an early indication of future criminality. In a paper published in The International Journal of Offender Therapy and Comparative Technology, it states that the FBI has since late 70’s considered animal cruelty to be a possible indication of future serial murderers. This is all the more reason why the government should take active steps to curb and monitor this inhumane practice of animal cruelty.

What can you do?

When you come across any instance of illegal animal cruelty as discussed above, do not feel that you are helpless or that you cannot do anything. By using the law creatively, we can make the lives of wrongdoers difficult – and experience says that any resistance goes a very long way in prevent cruelty towards animal.

Step 1: Inform local animal lovers or NGOs – but do not expect that they will do everything. They will definitely offer some guidance – but they are also very resource strapped, always. You need to take action and not be a burden on them. If they can help though, that is awesome. You should inform them anyway, in case you need some back up and support.

Step 2:  Confront the perpetrators. Tell them that they are doing something illegal and that you are going to lodge a complaint with the police unless they put an immediate end to it. Note that if what they are doing involve wildlife, they are in for serious trouble. Wildlife involves everything apart from a few domestic animals like dogs, cats, cows, buffalos, farm birds like chicken. Monkey, snakes, elephant, bear, most birds including parrots are wildlife and harming or capturing them is a serious crime that involves imprisonment. If domestic animals are being hurt unreasonably or unnecessarily, it is still a crime under the law for which there is a punishment although it is just a very insignificant fine. Even then, if you register a police complaint the perpetrators will be troubled and tell them that.

Step 3: If they do not listen, record evidence of their wrongdoing on the phone. This will unnerve them. Also tell them that you will share the recording on social media.

Step 4: Along with the recording (if not of wrongdoing itself, then of the injured or hurt animal etc.) go to the police station and lodge complaint. If wildlife is involved, inform the wildlife department also. Police may be insensitive and refuse to lodge complaint. Tell them that if they refuse to take it you will send it to the SP directly by registered post. Also tell them that many people from animal rights NGOs will come to insist if they do not register complaint.

Additional step in case of serious or recurring instances:

Contact the Honorary Animal Welfare Officer (HAWO) of your state and inform him about the ill treatment/cruelty being meted out. The list of HAWO along with their contact details can be found on Animal Welfare Board of India website, awbi.org. The HAWO is required to bring the incidents of cruelty to wild animals immediately to the notice of Wildlife Department. The HAWO shall also report to and convince the enforcement agencies of the State Government to take immediate remedial action in cases pertaining to cruelty/abuse of any animals, including domestic animals.

The greatness of a nation and its moral progress can be judged by the way its animals are treated.