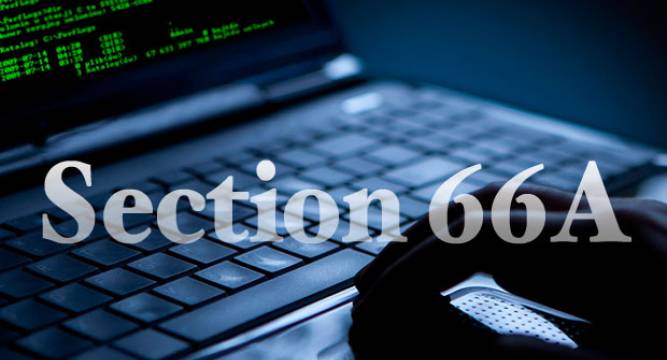 In this article, Neha Patankar who is currently pursuing Diploma in Entrepreneurship Administration and Business Laws from NUJS, Kolkata does an analysis of Section 66 A of the Information Technology Act in the light of the Supreme Court judgment

Digital technology and new communication systems have made dramatic and drastic changes in our lives as most of the business transactions are being made with the help of computers. Business community as well as individuals are increasingly using computers to create, transmit and store information in the electronic form instead of old age paper documents as it is cheaper and also easy to store, retrieve and speedier to communicate. People are aware of the advantages but they are reluctant to conduct business or conclude transactions in the electronic form due to lack of legal framework. Since electronic commerce eliminated the need for paper based transactions, thus the need was felt to initiate e-commerce, therefore bringing legal provisions in order to get recognition for the same. The United Nations Commission on International Trade Law (UNCITRAL) adopted the Model Law on electronic commerce in 1996. India being signatory to it has to revise it laws as per the Model Law keeping into consideration the suitable amendments.

Business and consumers are increasingly using computers to create, transmit and store information in the electronic form. At present many legal provisions assume the importance of paper based documents which should bear signatures. The Law of Evidence is based upon paper based records and oral testimony. Since the electronic commerce eliminated the need for paper based transactions, hence to facilitate e-commerce the need was felt to bring urgent legal changes. The UNCITRAL adopted the Model Law in the year 1996 on electronic based communications. There is a need to bring suitable amendments with changing time in the existing law of our country in order to facilitate e-commerce. It is, therefore, proposed to provide legal recognition of electronic records and digital signature. It is also proposed to provide for a regulatory regime to supervise the Certifying Authorities issuing Digital Signature Certificates in order to prevent misuse arising out of transactions. It is also proposed to impose civil and criminal liabilities for contravention of the provisions. Thus, the changes were brought in order to satisfy the current needs of the country and to lessen the burden. But not all citizens use it for bonafide purpose some uses it for its malafide intention giving rise to cyber crime. Section 66 of the Information Technology Act 2000 (amendment 2008) speaks about cyber crimes. After (Amendment 2008) Section 66 A- 66F were added describing certain kinds of offences. Here in this Article we will be looking forward to Section 66 A specifically in the light of Supreme Court Judgements.

Illustrations related to Section 66 A

Basically, Cyber crime is an ‘unlawful acts in which the computer is either a tool or a target or both’. Section 66 A specifically talks about sending offensive messages. Certain illustrations which would clear the above stated are;

Summary of the Section 66 A

Herein below is the brief summary of the section 66 A in order to get a better understanding which is later in 2015 has been repealed by the Supreme Court in Shreya Singhal vs. Union of India.

Acts penalized under 66 A

Punishment for attempt under 66 A

Punishment for abetment under 66 A

Is 66 A Cognizable and Bailable

As stated this section has been repealed by Supreme Court landmark Judgement in Shreya Singhal vs. Union of India (2013) 12 SCC 73.

Analysis of the provision

Supreme Court in the case analyzed that the said provision is curtailing the citizen’s fundamental right of Freedom of Speech and Expression, the two cardinal pillars of democracy and it being a cognizable offence is widely misused by the police authority in various states to arrest innocent persons for posting critical comments about social and political issues and about political leaders on social networking site. The court felt that it was the time to erase the provision from the law book as it has gone beyond reasonable restriction imposed by the constitution with respect to freedom of speech and expression.

Analysis of the judgement

The judgement given in this case is important in the Supreme Court’s history as it has widen the scope of freedom of speech and expression in a way of right available to express oneself freely and thus limited the scope of state in restraining the freedom in only most of the exceptional circumstances.  Justice Nariman has highlighted that the liberty of thought and expression is not merely an inspirational ideal. It is also “a cardinal value that is of paramount significance under our constitutional scheme.”

Therefore, it can be concluded that striking down the provisions of the Information Technology Act in relation to section 66 A has not only widen the scope of the freedom of speech and expression but has also created a scope for posting pictures and comments against any person without any fear and restriction of punishment as the words such as offensive and menacing are vague and ambiguous and can be interpreted widely. Thus if a person so finds himself defamed can exercise his right by filing a complaint for defamation under section 500 of Indian Penal Code. Hence, Section 66 A provided an opportunity to genuine victims of cyber harassment to obtain immediate relief against content that may be insulting or injurious in nature, abrogation of which has now made Police authorities toothless in dealing with the growing menace of cyber bullying.