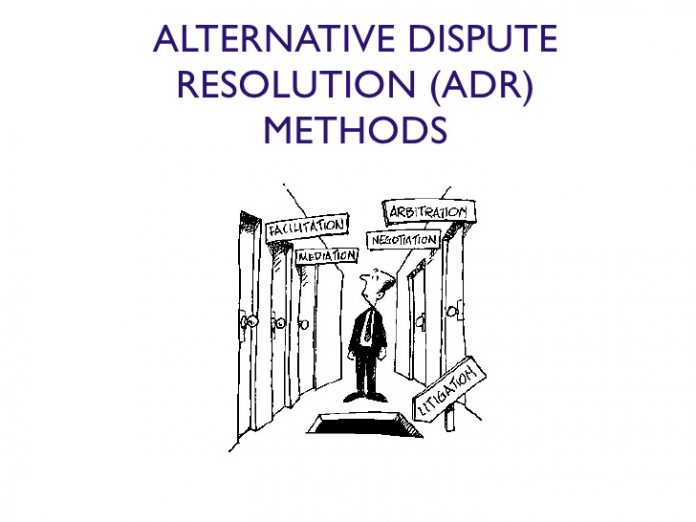 In this article, Rishabh Saxena throws an insight on Alternative Dispute Resolution (ADR) as an alternative recourse to litigation.

Indian judiciary is one of the oldest judicial system, a world-renowned fact but nowadays it is also well-known fact that Indian judiciary is becoming inefficient to deal with pending cases, Indian courts are clogged with long unsettled cases. The scenario is that even after setting up more than a thousand fast track Courts that already settled millions of cases the problem is far from being solved as pending cases are still piling up.

To deal with such a situation Alternative Dispute Resolution (ADR) can be helpful mechanism, it resolves conflict in a peaceful manner where the outcome is accepted by both the parties.

One of the most important feature of ADR is it resolves dispute in cost effective manner, less time consuming and produces desired result.

The concept of Alternative Dispute Resolution (ADR) mechanism is capable of providing a substitute to the conventional methods of resolving disputes. ADR offers to resolve all type of matters including civil, commercial, industrial and family etc., where people are not being able to start any type of negotiation and reach the settlement. Generally, ADR uses neutral third party who helps the parties to communicate, discuss the differences and resolve the dispute. It is a method which enables individuals and group to maintain co-operation, social order and provides opportunity to reduce hostility.

Importance of ADR in India

To deal with the situation of pendency of cases in courts of India, ADR plays a significant role in India by its diverse techniques. Alternative Dispute Resolution mechanism provides scientifically developed techniques to Indian judiciary which helps in reducing the burden on the courts. ADR provides various modes of settlement including, arbitration, conciliation, mediation, negotiation and lok Adalat. Here, negotiation means self-counseling between the parties to resolve their dispute but it doesn’t have any statutory recognition in India.

ADR is also founded on such fundamental rights, article 14 and 21 which deals with equality before law and right to life and personal liberty respectively. ADR’s motive is to provide social-economic and political justice and maintain integrity in the society enshrined in the preamble. ADR also strive to achieve equal justice and free legal aid provided under article 39-A relating to Directive Principle of State Policy(DPSP).

The process of Arbitration cannot exist without valid arbitration agreement prior to the emergence of dispute. In this technique of resolution parties refer their dispute to one or more persons called arbitrators. Decision of arbitrator is bound on parties and their decision is called ‘Award’. The object of Arbitration is to obtain fair settlement of dispute outside of court without necessary delay and expense.

What is the procedure to be followed once the arbitration clause is invoked?

Now the intricacies of the proceedings vary with the arbitration agreement. For example, there could be a timeline which must be followed. This timeline would be stipulated in the agreement.

Mediation is an Alternative Dispute resolution where a third neutral party aims to assist two or more disputants in reaching agreement. It is an easy and uncomplicated party centered negotiation process where third party acts as a mediator to resolve dispute amicably by using appropriate communication and negotiation techniques.  This process is totally controlled by the parties. Mediator’s work is just to facilitate the parties to reach settlement of their dispute. Mediator doesn’t impose his views and make no decision about what a fair settlement should be.

The process of mediation works in various stages. These are,

At the commencement of mediation process, the mediator shall ensure the parties and their counsels should be present.

It is the best possible outcome both the party come up with or has in mind. Its suitable situation as each party thinks about their most favorable scenario looks like.

For a successful negotiation the result always lies in the middle, mediator after considering both the parties comes up with most likely outcome. Here result is not always in the middle but little left or right of the center depending on negotiation situation.

It the worst possible outcome a party has in their mind for what could happen during negotiation.

It may be helpful to the parties and mediator to examine the alternative outside the mediation(specifically litigation) and discusses the consequences of failing to reach agreement like: effect on the relationship of the parties or effect on the business of the parties. It is always important to consider and discuss the worst and most probable outcomes, it’s not always people get the best outcome.

Mediator discusses the perspective of the parties about the possible outcome at litigation. It is also helpful for the mediator to work with parties and their advocates to come to a proper understanding of the best, worst and most probable outcome to the dispute through litigation as that would help the parties to acknowledge the reality and prepare realistic, logical and workable proposals.

Conciliation is a form of arbitration but it is less formal in nature. It is the process of facilitating an amicable resolution between the parties, whereby the parties to the dispute use conciliator who meets with the parties separately to settle their dispute. Conciliator meet separately to lower the tension between parties, improving communication, interpreting issue to bring about a negotiated settlement  There is no need of prior agreement and cannot be forced on party who is not intending for conciliation. It is different from arbitration in that way.

Actually, it is not possible for the parties to enter into conciliation agreement before the dispute has arisen. It is clear in Section 62 of The Arbitration and Conciliation Act, 1996 which provides,

Above provision clearly states conciliation agreement should be an extemporary agreement entered into after the dispute has but not before. Parties are also permitted to engage in conciliation process even while the arbitral proceedings are on(section 30).

Lok Adalat is called ‘People’s Court’ presided over by a sitting or retired judicial officer, social activists or members of Legal profession as the chairman. National Legal Service Authority(NALSA) along with other Legal Services Institutions conducts Lok Adalats on regular intervals for exercising such jurisdiction.  Any case pending in regular court or any dispute which has not been brought before any court of law can be referred to Lok Adalat. There is no court fees and rigid procedure followed, which makes the process fast. If any matter pending in court of referred to the Lok Adalat and is settled subsequently, the court fee originally paid in the court when the petition filed is also refunded back to the parties.

Parties are in direct interaction with the judge, which is not possible in regular courts. It depends on the parties if both the parties agree on case long pending in regular court can be transferred to Lok Adalat. The persons deciding the cases have the role of statutory conciliators only, they can only persuade the parties to come to a conclusion for settling the dispute outside the regular court in the Lok Adalat. Legal Services Authorities (State or District) as the case may be on receipt of an application from one of the parties at a pre-litigation stage may refer such matter to the Lok Adalat for which notice would then be issued to the other party. Lok Adalats do not have any jurisdiction to deal with cases of non-compoundable offenses.