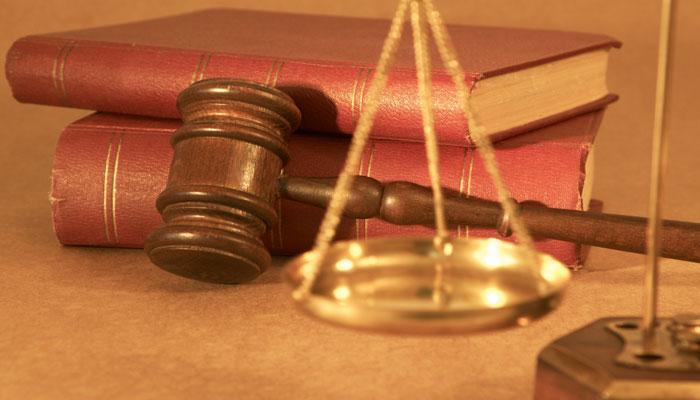 Article 25 of the Indian Constitution[1] Guarantees the freedom to practice, profess and propagate any religion. It reads as follows: “Freedom of conscience and free profession, practice, and propagation of religion.

(1) Subject to public order, morality, and health and the other provisions of this Part, all persons are equally entitled to freedom of conscience and the right to freely profess, practice and propagate religion.

(2) Nothing in this article shall affect the operation of any existing law or prevent the State from making any law.

(a) regulating or restricting any economic, financial, political or other secular activity which may be associated with religious practice;
(b) providing for social welfare and reform or the throwing open of Hindu religious institutions of a public character to all classes and sections of Hindus Explanation I, the wearing and carrying of kirpans shall be deemed to be included in the profession of the Sikh religion

Prevention of Acts Done in the Name of Religion

No act can be done, in the name of religion, which is to public order, morality or the health of the public. Several laws have been passed for the furtherance of such reasonable restrictions on practice, profession, and propagation of religion. One such legislation is Section 34 of the Police Act[5]. This law prohibits indecent exposure of one’s person in a public place as well as cattle slaughter. Such acts cannot be justified on grounds of the practice of religious rites. Similarly, untouchability and trafficking of human beings, such as in the case of Devdasis[6], cannot be practiced in the name of religion. These restrictions are rights guaranteed under Article 19(2) of the Constitution[7]. Also, the right to propagate religion does not include forcibly converting anyone to one’s religion.

The practice of one’s religion is subject to the essential religious functions test. One aspect that has come under this test in more than one religion, Hinduism, Islam and Christianity, is the use of loudspeakers. The legislation imposing this restriction is the Noise Pollution (Regulation and Control) Rules, 2000[8] which has been framed by the Government of India by the powers conferred on it by the Environment (Protection) Act, 1986[9].

The essential religious functions test, when applied to the use of loudspeakers renders, is a non-essential practice. Several judgments have been passed in this favor. 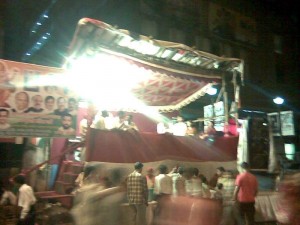 Proponents of using loudspeakers say that it is part of the devotees’ religious duty, conferred by the Shastras, to sing and listen to Bhajans. It is also necessary to inform others of the time for Namaz through the recitation of the Azaan by the muezzin of the mosque.

However, in the olden times, when the various faiths came into being or evolved and when their respective holy books were written. Every religion encourages its followers to spread its teachings, and modern instruments can make this process easier as well as more effective. However, no religion encourages forcing of unwilling people to be subject to expressions or displays of religious beliefs.

Lord Krishna, in the sacred text of the Bhagavad Gita, states that the Gita “should never be imparted to a man who lacks penance, nor to him who is wanting in devotion, nor even to him who lends not a willing ear; and in no case to him who finds fault with Me.”[10]It is also specified in the text itself that preaching of the Gita must be done only among devotees.”[11]
It has been specified that the gospel should only be delivered to one who enjoys listening to it and one who has patience for the same. It must never be forced upon one who does not want it.

The Holy Quran reads “Lakum Deenokum Walia Deem”[12]which means that one’s religion as well as religious belief is one’s own and each must stay happy with their religion as well as belief. It never mentions, making other people listen to gospels of your faith through the use of loudspeakers.

A similar instance occurs in the Bible. Jesus, in the Gospel, when sending out the Twelve to preach, he asked them not to take anything with them, neither a bag, staff, bread, money, extra tunic, etc. This means that the Gospel does not promote the use of modern equipment for propagation.[13]

Based on the above sacred texts, we can say that in a country like India, which sports such diverse cultures and religions, the use of loudspeakers for preaching religious beliefs and Gospels, is not backed by religious teachings and hence not essential features of religion. Hence, the limitation presented by the implementation of the Noise Rules cannot be said to be unreasonable. This view has been upheld in the judgment passed by the Supreme Court stating “banning the unsolicited use of loudspeakers at inconvenient times is in conformity with religious tenets.”[14]

The Supreme Court affirmed this view in the case Forum, Prevention of Envn. And Sound Pollution v Union of India (UOI) and Anr.[15]

The Court in also held that it is not prescribed in any religion that prayers must be performed by disturbing and disrupting the peace of others neither does any religion preach that prayers should be conducted using voice amplifiers or by beating of drums.[16] 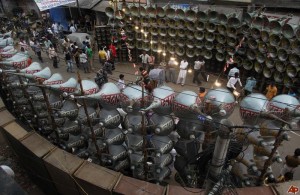 These judgements are inconsistency with Article 25 of the Indian Constitution as these limitations fall within the exceptions stated in subsection (1) of the same article as use of loudspeakers is violative of public health and also violates the fundamental right to life and liberty guaranteed under Article 21, which includes the right to peaceful, comfortable and pollution-free life. While we have the right to freedom of speech[17], others have the right to listen or to decline to listen. No one can be forced to listen, and no one has the right to trespass into the ears and minds of others through his or her voice. “If anyone increases his volume of speech and that too with the assistance of artificial devices so as to compulsorily expose unwilling persons to hear a noise raised to unpleasant or obnoxious levels then the person speaking is violating the right of others to Article 19 and cannot be pressed into service for defeating the fundamental right guaranteed by Article 21.[18]”

Other cases that have upheld the right to live in an atmosphere free from noise pollution is part of the right to life and personal liberty guaranteed by Article 21 of the Constitution include Free Legal Aid Cell Shri Sugan Chand Aggarwal alias Bhagatji v. Govt. of NCT of Delhi and Ors.[19] and P.A. Jacob v. Superintendent of Police, Kottayam.[20]

Hence, we can conclude that the use of loudspeakers for the propagation of religious beliefs is not essential for the practice of religion due to which it does not pass the essential religious practice test. Also, this practice violates the right to pollution-free environment conferred onto others under Article 21 of the Constitution.

[5] Police Act, Act 5 of 1861 §34; “… and it shall be lawful for any police- officer to take into custody, without a warrant, any person who within his view commits any of such offenses, namely: – First.- Slaughtering cattle, furious riding, etc.- Any person who slaughters any cattle or cleans any carcass; any person who rides or drives any cattle recklessly or furiously, or trains or breaks any horse or other cattle…”

[6]“Devadasi system is a religious practice in parts of southern India, including Andhra Pradesh, whereby parents marry a daughter to a deity or a temple. The marriage usually occurs before the girl reaches puberty and requires the girl to become a prostitute for upper-caste community members.”; available at http://iml.jou.ufl.edu/projects/Spring02/Chattaraj/genesis.html

(1) All citizens shall have the right

(a) to freedom of speech and expression;

(b) to assemble peaceably and without arms;

(c) to form associations or unions;

(d) to move freely throughout the territory of India;

(e) to reside and settle in any part of the territory of India, and

(g) to practice any profession, or to carry on any occupation, trade or business

(2) Nothing in sub-clause (a) of clause ( 1 ) shall affect the operation of any existing law, or prevent the State from making any law, in so far as such law imposes reasonable restrictions on the exercise of the right conferred by the said sub-clause in the interests of the sovereignty and integrity of India, the security of the State, friendly relations with foreign States, public order, decency or morality or relation to contempt of court, defamation or incitement to an offence.

[18] In Re: Noise Pollution – Implementation of the Laws for restricting the use of loudspeakers and high volume producing sound systems with Forum, Prevention of Envn. And Sound Pollution v. Union of India (UOI) and Anr., AIR 2005 SC 3136.