This article is written by Shreya Ganapathy pursuing a Certificate Course in Advanced Corporate Taxation from LawSikho. Reliance Jio Infocomm Limited (a wholly-owned subsidiary of Reliance Industries Limited (RIL) is an Indian public limited company registered under the provisions of the Companies Act, 2013. It is headquartered in Mumbai, Maharashtra while its registered office is in Ahmedabad, Gujarat. The following undertakings were a part of Reliance Jio Infocomm Limited:

The above-listed undertakings had differentiated strategies, faced different industry risks; and were part of different market dynamics. They had very different growth trajectories. The nature of competition faced by each of these undertakings was different and distinct. Due to this, a composite arrangement scheme was proposed by the company.

A brief overview of the scheme

Proposed benefits of the scheme

The benefits of the proposed composite arrangement scheme were as follows:

The decision of the National Company Law Tribunal

The proposed scheme received the approval of the shareholders and the creditors of the company. A joint petition under Sections 230-232 of the Companies Act, 2013 was moved to seek approval for the composite scheme of arrangement. The demerged/transferor company, resulting company, and transferee company (hereinafter collectively referred to as “Petitioner Companies”) were directed by NCLT, Ahmedabad Bench, to serve a notice to the Regional Director and Income Tax Department for their representations if any. Upon filing such notice, the Regional Director (North Western Region) issued no objection to the scheme. The final hearing was conducted and nobody appeared on behalf of the income tax authorities. The order sanctioning the said scheme was pronounced by the NCLT. This order captured the submissions which were made by the income tax authorities and issued all the necessary directions sought by them. 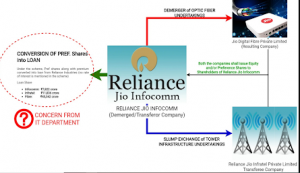 The Income Tax Department (hereinafter referred to as the “Department”) challenged the order of NCLT in relation to the third arrangement envisaged through the scheme while suggesting that the matter should not have been adjourned. They contended that while sanctioning the scheme, NCLT did not adjudicate upon the objections raised by them. Aggrieved by the order passed by NCLT, the Department approached the Appellate Tribunal challenging the order of NCLT on the grounds that:

The Department claimed that the proposed composite scheme of arrangement was a tool disguised as a permissible method of tax planning but was simply a means to avoid and evade the payment of taxes.

Whether the proposed scheme was indeed a means to avoid and evade taxes and should have been sanctioned as such by the NCLT?

The decision of the National Company Law Appellate Tribunal

This ruling of the Gujarat High Court was further affirmed by the Apex court when it refused to entertain special leave petitions and stated that the Department is free to undertake appropriate proceedings for recovery of tax which is statutorily due from any company.

Since the case in question was fully covered by the decision of the Hon’ble Supreme Court and in view of the fact that the liberty of the Department to undertake necessary actions to ensure petitioner companies compliance with law remained intact, NCLAT therefore, refused to overrule the decision of NCLT.

Further course of action by the department

As per the laws prevailing at present, an appeal against the order of the NCLAT lies before the Hon’ble Supreme Court. However, the Department is not in favour of challenging the verdict of the NCLAT. As per the Chairman of CBDT, the government is looking to reduce tax litigations. The new direct tax dispute resolution scheme “Vivad se Vishwas” has been rolled out with an intention to reduce tax litigation.  To achieve this, monetary limits for filing appeals have been raised. Further, numerous circulars have been issued wherein certain judicial decisions have been examined and the Department has decided that those issues will not be contested any further, nor will any further additions to those cases will be made. The Department is also considering the withdrawal of certain cases that have been filed by them. Nevertheless, it has invited an opinion from the Ministry of Law with regards to appeal against the order of NCLAT before the Supreme Court. The opinion from the Ministry is still awaited.

It is obvious that Reliance Industries Limited has spent immense resources in becoming India’s leading Digital platform Company. Entering a completely different league from their existing Oil to Chemical (O2C) Company was never easy and yet, using a bolt-on acquisition strategy, they managed to pave their way into offering a complete digital solution for their customers.  The whole exercise of restructuring was done so well that it will naturally result in high-value creation for all stakeholders by leveraging the RIL balance sheet and innovative tax-efficient structures.

NCLAT’s ruling on this matter will prove extremely beneficial in future corporate restructuring processes. The order passed by NCLAT will henceforth be a precedent. We conclude that conversion of preference shares and securities premium collected thereon into a loan is legally permissible during a corporate restructuring process. For a scheme to be rejected on the grounds that it has been designed with an intent to evade taxes, the Department will have to substantiate its claim with proper evidence on record.  Generally, while sanctioning a scheme, NCLT grants the Department the liberty to examine the matter in detail and take appropriate actions as per the provisions of law, but there have been instances in the past where some benches of NCLT have rejected similar schemes on the basis of similar objections raised by the Department. It’ll be interesting to watch how the benches of NCLT and the Income Tax Authorities will approach similar schemes to post this remarkable ruling by NCLAT.