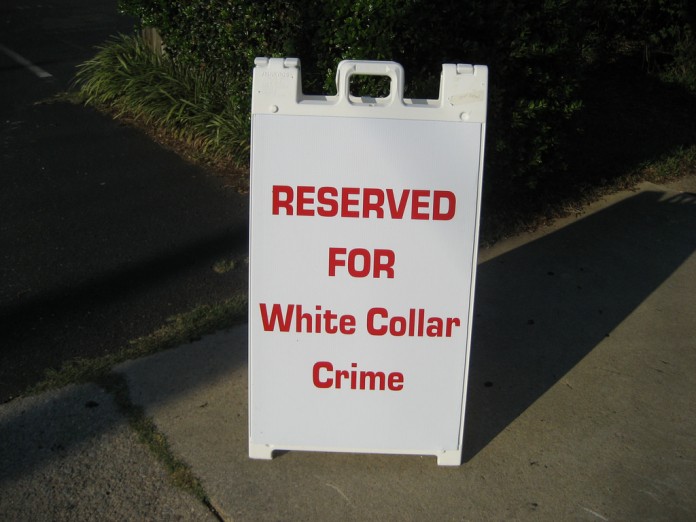 In this blog post, Aashish Ahuja writes about white collar crimes in India.

Meaning of White Collar Crime: What is it

White Collar Crimes are the crimes committed by a person of high social status and respectability during the course of his occupation. It is a crime that is committed by salaried professional workers or persons in business and that usually involves a form of financial theft or fraud. The term “White Collar Crime” was defined by sociologist Edwin Sutherland in 1939. These crimes are non-violent crimes committed by business people through deceptive activities who are able to access large amounts of money for the purpose of financial gain.

White Collar Crimes are committed by people who are involved in otherwise, lawful businesses and covers a wide range of activities. The perpetrators hold respectable positions in the communities unless their crime is discovered. The laws relating to white-collar crimes depends upon the exact nature of the crime committed.

There are different types of white collar crimes. Some of them are as follows:

White Collar Crime is pervasive in almost all the professions and occupations in the society. These crimes are common to the business world and Indian trade and violation of Foreign Exchange Regulation Act and export and import laws are resorted to make huge profits.

White Collar Crimes are rapidly increasing in our country with the advancement of commerce and technology. The recent developments in the technology have given new dimensions to computer related crimes known as cyber crimes. As such, the white collar crimes are increasing with the development of new websites. The areas affected by these crimes are banking and financial institutions, industry, business etc.

Thus crime is an act or omission which constitutes an offence and is punishable under the law. As the white collar crimes are increasing on daily basis, it injures the society on a large scale because the laws are not properly administered and therefore there is a need to curb the factors that are helping in the commission of such crimes.

The government of India has introduced various regulatory legislations, the breach of which will amount to white-collar criminality. Some of these legislations are Essential Commodities Act 1955, the Industrial (Development and Regulation) Act, 1951.,The Import and Exports (Control) Act, 1947, the Foreign Exchange (Regulation) Act, 1974, Companies Act, 1956, Prevention of Money Laundering Act, 2002.

The Indian Penal Code contains provisions to check crimes such as Bank Fraud, Insurance fraud, credit card fraud etc. In case of money laundering several steps have been taken by the government of India to tackle this problem. The Reserve Bank of India has issued directions to be strictly followed by the banks under KYC (Know Your Customer) guidelines. The banks and financial institutions are required to maintain the records of transactions for a period of ten years.

In order to tackle with computer-related crimes, Information Technology Act, 2000 has been enacted to provide legal recognition to the authentication of information exchanged in respect of commercial transactions.

Section 43 and 44 of Information Technology Act prescribes the penalty for the following offences:

Though the focus of Information Technology Act is not on cybercrime as such, this Act has certain provisions that deal with white collar crimes. Chapter XI deals with the offence of cyber crime and chapter IX deals with penalties and adjudication of crime. Apart from this, many issues are unresolved due to lack of focus. Some of them are:

There are some measures to deal with white-collar crimes. Some of them are, creating public awareness of crimes through media or press and other audio-visual aids and legal literacy programmes. Special tribunals should be constituted with power to sentence the offenders for at least 5 years and conviction should result in heavy fines rather than arrest and detention of criminals. Unless the people will strongly detest such crimes, it is not possible to control this growing menace.