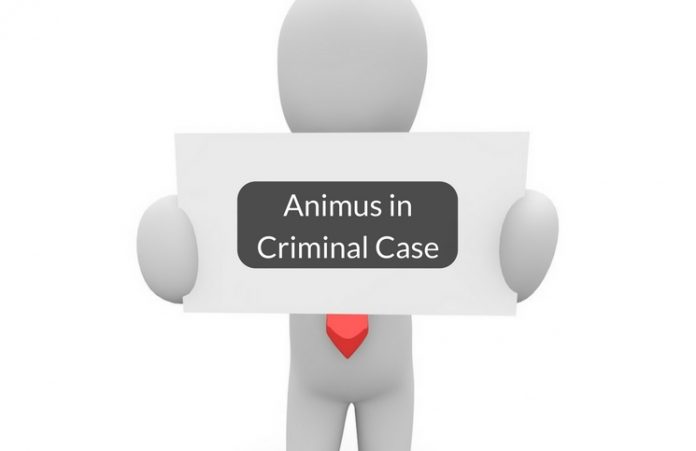 The maxim “actus reus non facit reum nisi mens sit rea”, translates as “an act is not necessarily a guilty act unless the accused has the necessary state of mind required for that offence”.[1] Mens rea (guilty mind) is a fundamental element required to make an act a crime. Therefore, in the context of a criminal case, animus of committing the crime and appreciating the outcome of it can be kept at par with mens rea.

Why Is It Important In a Criminal Case

To understand the importance of animus or intention in a criminal case, let us go through an illustration:

If guilty intention cannot be proved beyond reasonable doubt, the accused cannot be held guilty of the crime.[2]

However, it can be tough to prove the intention of an accused in a crime unless there is a definite proof of the intention, like a confession made by the accused accepting that he committed the crime. In a general sense, it is presumed that when you plan and act, you are aware of the probable outcomes of your action. The contention of not having mens rea stands with a very little strength, if the consequence is a criminal offence which is one of the reasonably probable outcomes.

For example, if A pushes B off a speeding train which causes B to die, but his intention was only to cause hurt to B, he may take a defense of not having an intention of murdering B, but his argument will not be a good one, as the death of the victim was an outcome a reasonable person would have anticipated before acting towards it.

Where the evil intention is within the scope of the actus reus, i.e. the act towards the commission of the crime, the intention is said to be basic intention. Here, what matters is that an act has been committed which had a crime as a consequence. For example, causing hurt to someone requires a basic intent.

However, if the intention goes beyond the scope of the actus reus, it is said to be specific intention. For example, in the case of murder, along with the basic intent, it must be proved that the offender had an intention of causing the death of the victim.

The intention is direct if the person does an act desiring a particular consequence from it. For example, if A hits B with an intention of causing hurt to him, his intention here is direct. In some cases, the intention may not be direct and the consequence of the act though not desired, can be foreseen as virtually certain, and yet the act may be pursued by a person. If so, he would be said to be having an oblique intention.

For example, A has an oblique intention if he shoots B in a crowded area, and the bullet hits a car and damages it, instead of or along with B. A will be liable to compensate the owner of the car for damages as well.

There is a presumption that mens rea, an evil intention of knowledge or the wrongfulness of the act, is an essential ingredient in every offence; but that presumption is liable to be displaced either by the words of the statute creating the offence or by the subject matter with which it deals, and both must be considered.[3]

There are certain offences under the Indian law for which an evil animus is not a requisite. Mere commission of the offence, with or without the intention of committing it makes the offender liable of the prescribed punishment. Such offences are said to have a strict liability.

Strict liability was defined in the case of Ryland vs. Fletcher[4], where it was stated that a person will be said to have a strict liability if he keeps a hazardous substance in his premises for a non-natural use and it escapes and causes any damage.

The exceptions to strict liability are:

An example of strict liability in Indian criminal law is violation of traffic rules.

The concept of absolute liability was recognized by the Indian judiciary in the case of M.C. Mehta vs. UOI[5]. The case is also known as the Oleum Gas Tragedy case. The facts of the case are that oleum gas leaked out of an industry in Delhi and caused severe damage to the local people. Considering the degree of the damage caused, the court refused to grant the exception available to the defendant in a case of  strict liability and held the liability of the industry to be absolute.

Establishing sexual relationship with an underage girl is an example of absolute liability under the Indian criminal law.

In fact, evil animus or mens rea is not only not required in the above mentioned cases, but has also lost its essence due to the codification of law. The language of the law uses terms such as voluntarily, intentionally, negligently, knowingly, fraudulently, dishonestly, rashly, omits, without lawful authority, etc. which restricts the requisite of mens rea, as the statutes already describe a proper manner of commission of of an act for it be be eligible to be held a crime.

Proof of the state of mind or of the conduct of the person as indicated by the aforesaid words establishes the offence and no further guilty intent or mens rea need be proved.[6]