In this blog post, Harsha Asnani, student, NIRMA University, Ahmedabad writes about anti-competitive agreements under the light of Competition Act, 2002. The author also writes about the type of such agreements and remedies for the same. With dynamic trends in the new economic market scenario, there was an enactment of new Competition law regime in India. One of the major objectives of this law was to change Indian economic policies, removal of trade barriers and enforce pro-trade changes. All this would ensure fair competition in the market which would benefit both the consumer and ensure smooth functioning of the market at the same time not proving to be arbitrary. In furtherance of the same, it was necessary to ensure that the agreements entered by trading entities do not acquire an anti-competitive nature.

Entities Covered under the Anti-competitive Agreements

Subsection (1) identifies the entities that are included in this section. These include agreements between:

The Competition Act Expressly prohibits any agreement that falls within any of the mentioned categories. Sub-section (2) expressly prohibits the entities mentioned above from entering into any agreements about production, supply, distribution, acquisition or control of goods or services which have the potential to cause harm or are likely to cause Appreciable Adverse Effect on Competition (AAEC) within India. AAEC can be defined as a phenomenon which is observed in the case of any of the provisions of this Act is contravened. It includes the negative effect that it creates on the market players and healthy competition in the market. The ambit of Section 3 is wide enough because it not only includes those agreements that are expressly stated but also implied agreements that come under its purview.

These categories broadly include the following agreements, between two entities, engaged in trade of similar or identical goods or services:

However, an exception can be created to this rule. If the nature of agreements is that of increasing efficiency regarding production, supply, distribution, storage, acquisition or control of goods or services. In the case where the agreement has a direct nexus between cost and quality efficiencies and it benefits the consumers or compensates them for any actual or negative impact that the agreement is likely to cause, then such an agreement does not fall within this category.

Also the Competition Act, 2002 does not recognize those agreements which impose reasonable restrictions that restrict or protect infringement of rights as guaranteed under the Intellectual Property laws. In the case of Shri Ashok Kumar Sharma v. Agni Devices Pvt. Ltd it was held that a mere restriction on the use of the trademark would not be held as anti – competitive within the meaning of Section 3 or 4 of the Act.

Section 19(3) requires that the Competition Commission of India should give due regard to the factors as mentioned above while deciding whether it causes appreciable adverse effect or not. However, in the case of Automobiles Dealers Association v. Global Automobiles Limited & Anr.,[1] CCI held that while examining the said matter, it shall work on the principles of prudence in light of the factors as mentioned in Section 19 (3).

While determining whether the agreement falls within the category of anti-competitive one or not, the competition Commission can employ the yardstick of the rule of reason. According to the rule of reason as explained by the United States Supreme Court in the case of Board of Trade of City of Chicago v. The US,[2] any restraint is of an essence until it merely regulates and promotes competition. To determine this question, the Court must ordinarily consider the facts peculiar to the business to which restraint is applied, its condition before and after the restraint was imposed, the nature of restraining and its actual or probable effect.

Although the Competition Act, 2002 does not recognize the categorisation of anti-competitive agreements into vertical and horizontal type, the language of Sub – Section (3) and (4) states that the former deals with horizontal agreement whereas the latter involve vertical agreements. Horizontal type of agreements is that where two rival enterprises at any same stage of production either fix prices or limit the extent of production or share markets. It is assumed that such agreements would cause a situation of AAEC. In the case of Sodhi Transport Co. v. the State of U.P.,[3] phrase ‘shall be presumed’ as used in Section 3(3) has been interpreted as a presumption and not as evidence in itself which is indicative of the party on whom the burden of proof lies. A popular example of such horizontal agreement is cartels. 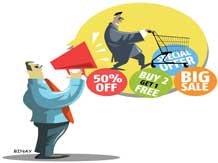 Vertical agreements include those agreements which are entered into by two enterprises at different stages of the production agreement for example between a producer and seller or between seller and distributor. The question of vertical agreements is determined by the court using the above-stated principle of the rule of reason. Both positive and negative impact of competition are analyzed using this rule.

After an inquiry if the commission finds that the agreement in question falls within the category of Section 3, it can pass any of the following orders as the case may be: