This article is written by Mr. Rishabh Shukla, pursuing B.A. LL.B (Hons) from The Maharaja Sayajirao University of Baroda, Faculty of Law. This is an exhaustive article which deals with the full-fledged details and explanation to the case of Megha Enterprises vs Haldiram Snacks.

Keeping the principles of natural justice in mind, independence, impartiality & neutrality of the arbitrator are essential for fair, free & unbiased arbitral proceedings. The extent of the power of the court in interfering with arbitral awards under Section 34 of the Arbitration and Conciliation Act, 1996 is still in the realm of uncertainty. A bare reading of the Section indicates that the power of the courts is limited to setting aside the arbitral awards, strictly in terms of the specific grounds enshrined therein. However, it is pertinent to note the fact that there are several judgments wherein the courts have crossed this limitation by not only setting aside the arbitral award but also by modifying the arbitral awards while dealing with petitions filed under Section 34. This article aims to look into the scope as to whether the courts can modify arbitral awards while dealing with petitions that are filed under Section 34. Though there are many judgments pertaining to the same, the focus of this article will be on the judgment of Megha Enterprises v. Haldiram Snacks (2021).

Presently, commercial arbitration is the preferred mode of dispute resolution for commercial disputes that are complex in nature. It is a well-known fact that our judicial system is, and has been for some time, burdened with a massive backlog of cases. These days, it is not unusual for matters to be stuck or delayed in the judicial system for more than a decade as a pending resolution, especially if the matters are of high value or complicated in nature. As a result, it is becoming a standard practice for parties to include arbitration clauses in all major transactions and agreements.

The concerned courts have the power to intervene to assist or guide the arbitration proceedings seated in their jurisdiction. This assistance can be in any one of the following ways:

There have been several recent initiatives to improve the arbitration landscape in India. Notably, amendments to the Arbitration Act have aimed at improving speed and efficiency of arbitration by, among other things mentioned herein:

Judiciary has also followed the lead, with a number of recent decisions narrowing the scope of judicial interference. The executive has also sought to bring about efficiencies in arbitration involving government institutions by encouraging and making involvement of ministries to comply with arbitration awards, pending any proposed challenge, in the interests of ensuring cash flow, particularly concerning major infrastructure disputes.

Thereafter, in terms of a scheme of amalgamation under Sections 391, 392, 393 and 394 of the Companies Act, 1956, Coral merged with M/s Haldiram Snacks Private Limited (The respondent herein). Under the terms of the said scheme of amalgamation, all the assets of Coral stood vested with the respondent, including a sum of INR 19,03,77,000/- receivable from the petitioner in respect of the High Sea Sale Agreements. According to the respondent, the petitioner took delivery of the crude palm oil at Kakinada, which was the port of delivery, in accordance with the terms and conditions of the documents executed between Coral and the petitioner. However, the aforesaid amount of INR 19,03,77,000/- remained outstanding as the petitioner failed to pay the same. 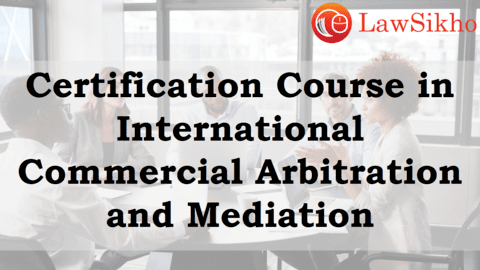 Consequently, by a notice dated May 18, 2016, addressed to the petitioner, the respondent invoked the arbitration clauses under the High Sea Sale Agreements and sought the consent of the petitioner to appoint a sole arbitrator from amongst a set of three former judges of the Delhi High Court. In the released notice, the respondent sought payment of INR 19,03,77,000/- whole sum with interest at the rate of 18% per annum, which according to the respondent was in terms of the High Sea Sale Agreements as well as the custom and usage of trade. The petitioner responded to the said notice via a letter dated June 3, 2016, denying its liability to pay the said amount as claimed by the respondent and also declined to give consent for the appointment of an arbitrator. The petitioner further claimed that the arbitration clause was not binding on any of the parties.

Thereafter, the respondent filed a petition with the Delhi High Court under Section 11(6) of the Arbitration and Conciliation Act, 1996 seeking the appointment of a sole arbitrator to adjudicate the disputes arising out of the High Sea Sale Agreements in question. The said petition was allowed by the Court and under an order dated April 18, 2017, the court then referred the parties to the Delhi International Arbitration Centre (DIAC) with a direction for the DIAC to appoint an arbitrator in accordance with the provisions of the 1996 Act and its rules.

Following this, the respondent filed its statement of claims before the sole arbitrator on June 5, 2017, claiming the following:

In response, the petitioner filed its statement of defence raising several contentions including the Respondent’s claims being barred by limitation as the arbitration clause was invoked on May 18, 2016, which was beyond a period of three years from the date on which the amounts became payable under the High Sea Sale Agreements.

The arbitral tribunal, however, rejected the contention that the claims made by the respondent were barred by limitation and in its award and held:

Aggrieved by the arbitral award, the petitioner filed the present petition under Section 34 of the 1996 Act challenging the impugned arbitral award dated October 26, 2020, before the Delhi High Court.

Contentions raised by the petitioner

It was also contended that the tribunal had erred in accepting the respondent’s contention that one Mr. Avneesh Agarwal of Coral had received a letter dated May 31, 2013, (Balance Confirmation Letter) acknowledging the liability of the petitioner under the invoices. The petitioner contended that the said letter was not signed and therefore, could not have been considered as an acknowledgement under Section 18 of the Limitation Act, 1963.

It was further contended that an e-mail dated June 4, 2013, forwarding the Balance Confirmation Letter which was purportedly forwarded by Mr. Mohan Maganti of M/s KGF Cottons Private Limited to Mr. Avneesh Agarwal could not be construed to extend the period of limitation as the same had not been sent by any of the constituent partners of the petitioner. Further, there was no evidence to support the fact that Mr. Mohan Maganti was an employee of the petitioner. Additionally, the email itself indicated that it was sent on behalf of M/s KGF Cottons Private Limited, and communication by a third party could not be considered as an acknowledgement by the petitioner or any other third party on its behalf.

Contentions raised by the respondent

It was contended that the arbitral tribunal had also examined the question of whether the Balance Confirmation Letter was required to be signed and had in this regard followed the decision of the Karnataka High Court in the case Sudarshan Cargo Private Limited v. Techvac Engineering Private Limited (2014), where it was held that e-mails can be construed and read as a due acknowledgement of debt and the same would meet the parameters as laid down under Section 18 of the Limitation Act.

The High Court of Delhi, in this case, based on the arbitral tribunal’s findings observed that it was specifically clear that it had examined the question of limitation in detail. The High Court further observed that the petitioner neither presented its books of accounts, nor its ledger to contest the contents of the mentioned email. Thus, in the eyes of the court, no evidence was presented before the court by the petitioner to establish that the assertion made in the Balance Confirmation Letter that its ledger accounts reflected a sum of INR 19,03,77,000/- as outstanding towards Coral/respondent was incorrect.

It was further observed that the scope of examination of an arbitral award under Section 34 of the 1996 Act was extremely limited. It is trite law that the High Court, on the ground of patent illegality, would not undertake the exercise of re-appreciation of evidence. In this case, no case could be made out by the petitioner that mentioned that the arbitral award was contrary to the fundamental policy of India, as it could not be considered to be opposed to justice or morality, by any stretch.

The High Court also observed that it was trite law that delays in filing a claim results in only barring the remedy, but not in extinguishing any sort of debt. After evaluating the material on record, the arbitral tribunal had rejected the petitioner’s contention that the respondent be denied its remedy to seek what it claimed to be legitimately due to it. Thus, there was no question of such an approach offending any sense of morality as was embodied in the expression “public policy” as used in Section 34(2)(6) of the 1996 Act.

Additionally, the High Court of Delhi also noted that the dispute, in this case, is related to a simple transaction of sale and purchase of goods and that everything the arbitral tribunal had done after having found that the petitioner had not paid for the goods purchased by them, was to award the said consideration to be paid with interest.

The Delhi High Court, in this case, affirmed the arbitral award that was passed in favour of the Respondent and thereby dismissed the application filed under Section 34 since the petitioner was not able to assail any ground or advance any argument that could be accepted by the High Court. While dismissing the application, the court rejected the arguments of the Petitioner as it did not find any reason to interfere with the award merely on the ground that the arbitral tribunal had made an error in drawing inference from the evidence on record.

This decision of the High Court goes a long way in affirming multiple facets of not just arbitration law but allied laws as well. First and foremost, the High Court has continued its stance of pro-arbitration by not interfering with the award on the ground where there may be disagreements overdrawing inferences from the evidence on record.

Additionally, whilst upholding the view of the arbitral tribunal on the point of acknowledgement of debt in an electronic form, the court has taken a positive step forward in appreciating the technological advancements and by applying the contours of Section 18 of the Limitation Act to electronic communications as well.