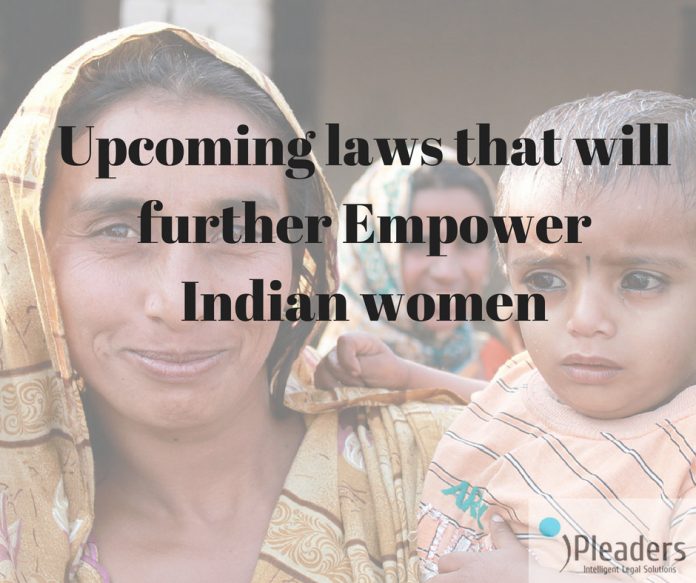 Our Constitution provides the articles for gender equality and empowerment of women. Some of the articles mentioned below are:

The main objective of this bill is to represent females in Lok Sabha and state legislative due to lack of their representation in these areas.

The main features are of this bill are mentioned below:

The main objective of the bill is to protect the indecent representation of women which is growing faster with the new technology.

The main focus of the bill is as follows:

The main objective to introduce this bill is to protect women from being exploited. It has become a practice for women of lower sections of the societal structure to rent their wombs for money. A venture where the rich exploit the women stricken from poverty.

The main objectives of the Bill are:

This bill makes triple talaq, a punishable offense which was decided by Supreme Court in Shayara Bano v. Union of India, 22nd August 2017.

It makes triple talaq as “void and illegal”.

The main objective of the bill is to understand the problems faced by the women in day to day life and also to provide menstrual leave of 2 days to every working woman in order to give them a healthy work environment.

The main features of the act are:

The main objective of the bill is to protect women from being exploited in the name of human trafficking.

The bill focuses on the following lines:

So many bills are still pending in the parliament and the upcoming laws are definitely going to help women a lot but the problem is that in the 70 years of Independence only the minuscule population of the women are ready to discuss their issues. To overcome this problem we need to spread the legal education in different sectors of the society through various means like street plays, door to door campaigns. So that people should be aware of their rights and we really need to work towards the gender sensitization.