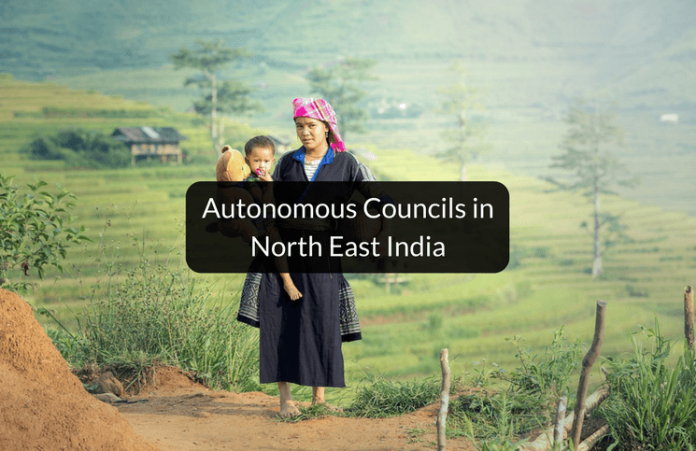 In this blog post, Raghav Gupta, pursuing M.A. in business law from NUJS, Kolkata, talks about the powers of the autonomous councils in tribal areas of north east India.

There are the several autonomous administrative divisions of India to which the central government has given varying degrees of autonomy within the state legislature. The establishment and functions of most of these autonomous councils are based on sixth schedule to the constitution of India.

The most important structural change in the administration is the grant of political autonomy and statehood in North East India. This happened back in the British era when the Interim Government of India had appointed a sub-committee to the Constituent Assembly of North- East Frontier (Assam) Tribal and Excluded Areas Committee under the chairmanship of first Assam Chief Minister Gopinath Bardoloi.

The committee recommended setting up of autonomous district councils to provide due representative structures at the local level to the tribal population. The recommendation was later incorporated into Sixth Schedule article 244 (2) & Article 275(1) of the Indian Constitution.

As per sixth schedule states like Assam, Tripura, Meghalaya and Mizoram are the states consisting of tribal areas and are deemed to be technically different from the other areas. These areas fall under the jurisdiction of respective states but certain provisions are made to create some district and regional councils specially for the tribal areas. These councils have certain judicial and legislative powers. Each district is an autonomous district and Governor can modify/divide the boundaries of the said tribal areas by notification. Currently, there are ten such councils in the region.

Some of them are-

The Sixth schedule lays down a framework of autonomous decentralized governance with legislative and executive powers over subjects like water, soil, land, local customs and culture. These bodies have also been given judicial powers to settle certain types of civil and criminal cases also. Thus, the councils under the sixth schedule have been given more power than the local governments under the 73rd and 74th amendments in the rest of the country.

It has been established that this autonomy paradigm has brought a degree of equilibrium within the tribal societies mainly via the formal dispute resolution under customary laws and through control of money-lending etc thus giving it financial power. In Assam, Tripura and Mizoram, the autonomous councils have power to decide if a State legislation on subject matters under the autonomous councils should apply to their territories or not. They even have their own political power but that is as good as not having because the members of council are elected by ministers from state legislature. Thus, they have all such powers which will be discussed below.

Para 12 (A) of the Sixth Schedule clearly states that- whenever there is a conflict of interest between the District Councils and the state legislature, the latter would prevail.

Thus, state enjoys the superiority, but then it is alleged that autonomous councils are mere platforms for aspiring politicians who nurture ambitions to contest assembly polls in the future.

With the existence of autonomous district councils and the, state governments, the thrusts seems to be more on legislation than codification. Legislation, no doubt provides uniformity in traditional system rather than codifying the customary laws that vary from tribe to tribe. It may be further added that if the tribal people to develop according to their genius, land- relations have to be changed radically to keep continuity with egalitarian ethos of tribal traditions.

Within the councils, over a period of time, due to large development funds available, a nexus has emerged between the rich middle class or classes or rich traders, contractors, bureaucrats and educated, who have emerged from within the tribal society of north east India. This emerging socio-economic power structure in the tribal areas does not allow the benefits of the Sixth Schedule to flow down to the weaker section of the tribes.

The elected members in councils and the office-bearers, who are normally from the elite group of tribal society, have vested interests in preserving the exploitative structure and have created a class which has cornered all the privileges. They have undermined the purpose of the Sixth Schedule to build a democratic edifice for the Councils.

Further the political agenda of the committee always raises the question whether the district council and the regional council are working for the interest of the local tribes and people or not. The elections of members are not done within the tribe which is a cause of concern and the poor tribes don’t get a chance to be a part of the council.

Election done by any person from the government raises a question into our minds if it is for political purpose or financial gain indirectly and will those people work for personal and political gains and numerous cases have been found where the council members are found guilty misusing the power and therefore it is easy to say that even though it is an autonomous council yet it has numerous drawbacks.

Benefits Of Business In These Areas

Every law has its own advantages and disadvantages and therefore even though there are certain drawbacks of the autonomous councils of north east India, there are numerous other advantages to the businessmen who want to invest in north east India due to special tax deductions and other government benefits mainly because the government is trying to develop north east India in the same way like rest of the India and want the tribals to learn and educate themselves and get good jobs so  that they don’t  face difficulties in this growing generation of people.

India’s north east region is endowed with nature and natural resources and is acknowledged as India’s eastern gateway of governments ‘Look East Policy’.  Most of it is tribal area and  with 2000 km of border sharing with China, Bhutan, Myanmar and Bangladesh, the north east is comprised of various tribes and various culture that means different customs and traditions which means that they have different traditional handicrafts made there and they where different clothes etc. North east has a climatic advantage making it suitable for agriculture industry like rearing of silkworm, fishing and other traditional businesses.

Investment opportunities for businessmen are available in agriculture market like production of rubber and bamboo, in fact, Tripura attracts lot of investment by businessmen in rubber production and is also known as second rubber capital of India after Kerala. The benefit here to businessmen are that setting up of a small cottage industry is comparatively less costly than setting up industry elsewhere. The employment and labour cost is low and the electricity cost is low and government provides various tax concessions but the tribal people should also get employment and necessary help in development.

As per the ‘North Eastern Industrial and Investment Promotion Policy also known as “NEIIPP” in 2007’ by the Ministry of Commerce and Industry, the region has been declared as special economic zone (SEZ). The SEZ areas are those areas where investment is necessary for progress of the country. These areas are backward if compared with other regions of the country therefore Indian government tries to lure investors and businessmen to invest in such areas with different incentives and tax free business offers.

The central government has implemented various schemes to attract investors.

Some of these schemes are mentioned below:

Several tourist spots are located in the jurisdiction of the autonomous district and autonomous regional council in north east like the blue mountain situated in Phawngphui, Palak lake in the state of Mizoram, then Kangla fort in Manipur and a river island in Assam called Majuli and these places are filled with tourists now a days and, many businessmen have set urban resorts and small motels and restaurant for the tourists.

This gives the locals a boost in employment and the businessmen get cheap labour too. The council keeps an on any unethical working of such business. They also take care of the local environment by stopping tourists to litter and teaching them about the traditional practice of the north eastern tribes.

There are numerous tribal culture which gives the tribals opportunity to show the world each and every culture from tribal wear to tribal food. The local councils have caused awareness and done campaign in cities to attract tourists as well as foreigners. They were able to invite some big names from the entertainment industries like discovery channel and animal planet to show the diversity and culture to the rest of the world.

World renowned chef Gordon Ramsey also visited the tribal areas of Mizoram and learnt few tribal cuisine from the people so the autonomous society is doing well for the tribes and the businessmen.

Other opportunities to businessmen are under tea estates. Many big Indian businessmen have invested in tea estates of northeast and earn well. The natural weather helps them with the best tea in the world. It has a very well performing gender developing index. For businessmen there are various incentives in bamboo industry as the north east has a big bamboo reserve.

Sericulture and fish farms are common over there and the locals are very much supported by the council but others are not well supported because the council wants all the primary market to be under the locals so that the tribals are not harmed because most of the locals are tribals or they stay in those areas and which are well versed with tribal culture and customs, their style of living and their problems. So, the council feels that the locals could understand the real effort behind the art and craft and other handicrafts of the north east. They will pay them properly and will help them develop.

Due to so many tax exemptions and various other facilities by the government as well as the autonomous society, makes north east region of India a perfect new investing play ground for the businessmen now. Various private companies are also given offers to construct roads and highways without destroying nature or disturbing the tribes under the surveillance of the autonomous society which helps the tribes in getting jobs and the locals to go for higher education.

It also provides business opportunities and education opportunities to few tribals who want to develop and move forward with the nation. Unfortunately many businessmen are caught violating laws by bribing the members of the society and bribing the tribes too. In few cases they were caught buying animal skin and rhino horns and in other cases the tribal women were molested by the public servant and the businessmen.

These unfortunate incidents should be condemned and strict actions should be taken by the autonomous society as well as the law there. Thus as a whole there are various opportunities as well as drawbacks of the sixth schedule and the law related to it for the businessmen but I personally feel the advantages over power disadvantages and no matter what we will all remain Indians and each state has the right to grow and get benefits of the government.