Kashish Khattar is a 4th-year student at Amity Law School, Delhi. This article is a discussion revolving around the banking fraud that is plaguing the banking sector and attempts to give out solutions for the same.

“The banks are the lifelines of the economy and play a catalytic role in activating and sustaining economic growth, especially, in developing countries and India is no exception.”

Fraud is a real operational risk for the banking system. The Reserve Bank of India (“RBI”) has defined ‘Fraud’ as “A deliberate act of omission or commission by any person, carried out in the course of a banking transaction or in the books of accounts maintained manually or under computer system in banks, resulting into wrongful gain to any person for a temporary period or otherwise, with or without any monetary loss to the bank.”

The latest Financial Stability Report by RBI (here) in June 2018 suggest that the banking system has reported around 6,500 instances involving fraud of around Rs 30, 000 crores in the last fiscal. Several other banking frauds which were reported subsequently have raised several questions about the ability of the PSBs to contain these situations.

Challenges in the Banking System 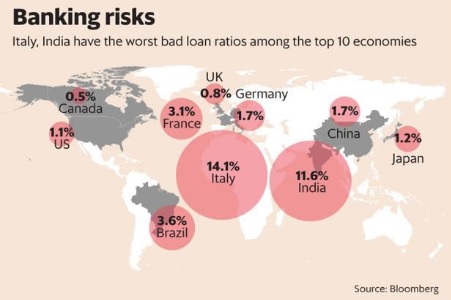 Banks are known to be the backbones of the economy. It is imperative to keep the banking industry healthy. The following are some of the factors that are challenging the banking sector in the recent years:

Looking for the possible solutions

Let us talk about the various steps taken by the Government to prevent frauds, also listing out some other viable solutions to solve the problem of NPAs: (i) Recommend to the Centre, formulation of various accounting and auditing standards and policies that should be adopted by the companies and auditors;

(ii) Monitor, enforce such standards and policies; and

(iii) Oversee the quality of services of the professions that are associated with the compliance of these standards and policies.

NFRA has been specifically given powers to investigate cases of professional misconduct by CA or CA firms. It can impose a penalty and debar any such entity up to a period of 10 years. The government has stated that the creation of such an authority will improve upon foreign and domestic investments, enhance economic growth, meet international business standards and will ultimately help the government bring in some smoothness in the auditing profession, who has been called as the most important watchdog for economic frauds in the economy.

(i) Bad loans which amount to Rs. 50 Cr will be managed by a dedicated vertical or a Steering Committee which is to be set up by the bank itself, which has to ensure that the resolution takes place in 90 days;

(ii) The range from Rs. 50 – 500 Cr, the banks will need to enter into an inter-creditor agreement which authorizes the lead bank to implement a resolution plan within 180 days, including the appointment of turnaround specialists. This is known as the Bank Led Resolution Approach. Under the inter-creditor loan agreement, the lead lender (having the highest exposure) will be authorised to formulate the resolution plan for the turn around of assets which will be presented to lenders for their approvals.  If the lead bank is not able to complete the process in 180 days, the asset will then be referred to the National Company Law Tribunal (“NCLT”);

(iii) For the loans above Rs. 500 Cr, they will be dealt with via an AMC/AIF-led process. The panel has proposed the creation of a National Asset Management Company (“AMC”) to take over such NPAs from banks. The main idea is the setting up of an independent AMC supported by institutional funding in stressed assets or AIF. The idea behind AMCs is to help consolidate the stressed assets under the AMC model for better and faster decision making. There can be an option of more than one AMC, which completely the market backed up by private equity.  No capital is needed by the government in this process, investors are welcome to invest. It is an open and transparent process; and

(iv) A new role for NCLT – Biggers loans which cannot be resolved through any of these strategies will be transferred to the NCLT for resolution under the Insolvency & Bankruptcy Code (“IBC”).

The gross NPA ratio of scheduled commercial banks could rise to 12.2 per cent by March 2019 from 11.6 per cent in March 2018, as stated by the RBI. Without a doubt, a technologically advanced system which is transparent and highly efficient can lead to a financially healthier banking system of the country. In my opinion, to achieve the goal of a faster yet inclusive growth, in the banking sector, the government and the banking sector should undertake a comprehensive relook into the existing policies and structures. They should be open to more ideas that have been implemented around the world.  Only the time will tell as to how the government and the banking industry sector get together the current NPA problem plaguing the loan portfolios of various banks.