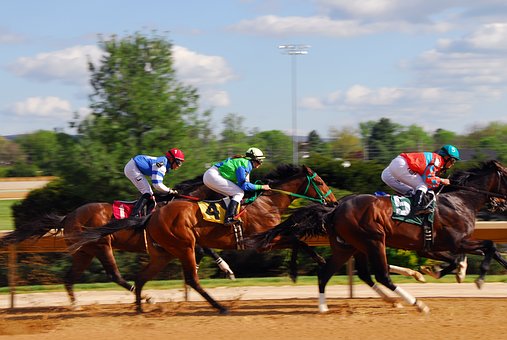 In this article, Shrey Chakraborty discusses why is betting on horse racing legal in India?

“Dice verily are armed with goads and driving hooks, deceiving and tormenting, causing grievous woe. They give frail gifts and then destroy the man who wins, thickly anointed with the player’s fairest good. The gambler’s wife is left forlorn and wretched: the mother mourns the son who wanders homeless. In constant fear, in debt, and seeking riches, he goes by night unto the home of others,”

The above stated are translated verses of Rigveda. It speaks of men who have lost their homes, families and everything they ever had as a result of gambling. In Manu, gambling has been recognized as completely prohibited activity in the economy because it would destroy truth, honesty and wealth. Albeit, gambling has been a part of every economy since ancient times, it is something which the State doesn’t really promote. It is not uncommon for the State to completely prohibit gambling and betting. While the States that did permit this vice, made sure that it is happening within their control. As a result, they ensured to get a share out of every activity which was taking place in their kingdom.

In India, the position of gambling and betting with respect to various sports remains to be a gray area. This article would be elaborately dealing with horse racing as a mode of betting and gambling. It would further be explaining as to the position of law on the betting on horse racing and why is it legal while the other forms of gambling are illegal. The article would further delve into the legislative competence on betting and gambling and would also shed light on a few renowned case-laws in order to bring clarity in the position of law.

What is the position of law on gambling in India?

Time and again, the Indian Courts have held that gambling is an activity which deters the growth of the economy and causes a loss of a man’s income. The Courts have always reasoned that activities which involve gambling or betting causes economic harm to the public welfare. This is because gambling involves wagering on an event, whose happening or non-happening is not certain.

As per the new Encyclopedia, gambling has been defined as – “the betting or staking of something of value, with consciousness of risk and hope of gain, on the outcome of a game, a contest, or an uncertain event whose result may be determined by chance or accident or have an unexpected result by reason of the bettor’s miscalculation.”

As seen above, gambling is a kind of contract which involves a certain kind of risk and based on the outcome of that risk, the contract will be advantageous or disadvantageous to the party. Such contingent contracts are defined in the Indian Contract Act, 1872.

So, in every wagering agreement, it is essential that there is a risk of losing as well as winning. If we take that away from the contract, the contingent nature of the contract will no more be there, making it not a contract by way of wager.

Example – A owns a lot of horses in India and has a wagered on quite a lot of horse races and won them mostly. B, A’s friend, is a novice and has recently started wagering on horse races. A approaches B to for wagering on a horse race. A suggests him to put his money on one of his horses, which A knows to be sick. B, in good faith, puts his money on that sick horse. This will not be a contract by way of wager because there is no element of risk or uncertainty.

Thus, in this example, the contract entered by A and B will be void but not illegal.

There are many forms through which people gamble and some of the games based on gambling are – Poker, Rummy, Bingo, Big Six Wheels etc.

Gambling in India is heavily restricted but there are a few exceptions to this. In India, Sikkim and Goa are the only two states that permit gambling in a restrictive form. However, The Goa, Daman and Diu Public Gambling Act, 1976 authorises five star hotel and on offshore vessels, with the prior permission of the State Government. Similarly, the Sikkim Casino Games (Control and Tax Rules) 2002 authorises to carry gambling under the control of the State Government. On the other hand, there are other state legislations that prohibit gambling in their states such as  – The Bengal Public Gambling Act 1887, The Bombay Prevention of Gambling Act 1887, The Delhi Public Gambling Act 1955 etc. These acts are enacted with an object of restricting gambling in their states.

Why are there different laws with respect to gambling in India?

As seen, there are several state laws in India which either prohibit gambling or they permit gambling in a restrictive manner. But, why is it so? Why are there different laws which govern the subject of gambling in India? And why do these laws differ when it comes to permitting or prohibiting gambling?

This is the reason why there are diverse laws in India when it comes to the subject matter of gambling. There are 29 states in India and each of these states have their own laws when it comes to gambling and betting. The Constitution has vested the power with all of these State Governments to decide the laws pertaining to gambling and tax them accordingly. Since Constitution of India is the grundnorm, the Central Government cannot go against it.

Why is betting on Horse Racing legal in India?

Horse racing is one of the sports in which gambling is very prominent. It is not something which is illegal in India. Its legality has been challenged before the courts as well and the Supreme Court held it to be legal. The question which comes to one’s mind is that if gambling is prohibited in India (most of the states), then why is gambling, which is a prominent activity in horse racing, not prohibited in India. It is very natural for a person to encounter with this question.

This question was first addressed by the Supreme Court in the case of State of Andhra Pradesh v. K. Satyanarayana and ors. In this case, the Court ruled – “In fact in all games in which cards are shuffled and dealt out, there is an element of chance, because the distribution of the I cards is not according to any set pattern but is dependent upon how the cards find their place in the shuffled pack.”

In this, the Court has tried to draw a line between the games based on chance and the ones based on skill. This was done in order to separate Rummy (which is predominantly a skill based game) from the other games of pure chance such as Roulette or a Lottery. On the other hand, Horse Racing is not a game of pure chance, rather quite the opposite of that. Whether a horse wins the race is not purely a based on the chance but is determined by several other factors such as – pedigree given to the horse, adequate training received by the horse as well as his rider, nature of the race, the health of the horse etc. Based on these numerous factors, the horse gets a chance of winning the said race.

Therefore, it would not be incorrect to say that betting on horses in a race also involves certain kind of skill which one must possess to get a favourable outcome. It involves assessment of the contestant’s physical skills and abilities as well as the use of other evaluative skills.

The three judge bench observed as follows: “In view of the discussion and the authorities referred to by us, we hold that the horse-racing is a game where the winning depends substantially and preponderantly on skill.”

Which is the regulating body of horse racing?

In India, the nodal authority of horse racing is Turf Authority of India. This authority is comprised of 5 main race clubs namely:

Apart from the club mentioned above, there is also one in Mysore (Mysore Race Club Ltd.) and one in Delhi ( Delhi Race Club (1940) Ltd.), All of these clubs are separate entities which have their own committees governing them. This means that they have separate membership and eligibility criteria. Once a member of this, a person can bet on the race legally. To view the membership criteria, click here. The procedures pertaining to the membership differs from club to club. One of the club’s procedure is given here. There are also a few off-course betting centers. To view them, click here.

As seen from the discussion in this article, the position of law is quite clear. Betting on horse races remains to be legal in the eyes of law. There are numerous state legislations in India which either ban or permit betting on horse races. Goa and Sikkim are the only two states which have authorized betting in their states.

Betting in India, although is an age old practice but is an activity which is much frowned upon. Indian society never truly accepted betting and gambling as part of the society and that is the reason that even today only 2 states in India permit betting and gambling.

“Play not with dice: no, cultivate thy cornland. Enjoy the gain, and deem that wealth sufficient. There are thy cattle, there thy wife, O gambler, so this good Savitar himself hath told me.”