This article is written by Kabir Jaiswal, from National University of Study and Research in Law (NUSRL), Ranchi.

The author is going to discuss the following issues in this article:

Public displays of affection or PDAs can include a wide range of romantic activities, from hand- holding to public kissing. Until the behavior is over, it is unlikely to attract the attention of the police and lead to your arrest. However, if you were to engage in bolder behavior, such as sex in a public place like the local beach or park, your chances of being arrested are greatly increased.

Some cringe could be made by PDA, but not others. You are free to do anything you want to do with your partner, but if you want to show affection to the public, just be sure to follow some unwritten regulations.

We live in a country where urination is acceptable in public, but it is not just a hug between people of different sex. People can quickly assume when they see pairs holding their hands or sitting next to each other. That is people’s inadmissible reaction to simple acts of affection.

The mentality of the majority of Indians still lacks the simple eagerness to accept that the world is changing and that the people are changing. Holding hands, hugging, holding arms around your shoulder, turning many heads. Many eyes of judgment follow you when you see such totally innocent acts as are considered obscene. Such little affectionate gestures are often a big issue in India.

Actions which doesn’t amount to PDA 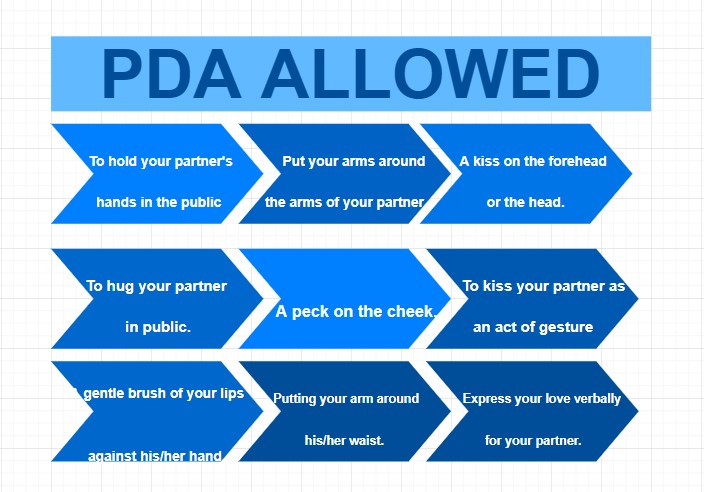 As an Indian, the author understands that we are all concerned with values. But the lament that licentiousness and general moral deterioration are increasing is not new in itself.  We find it in all ages and periods, and historians will tell us that these claims should not be considered factual reports. However, if this alarm has an objective basis, should we use force to make “moral” men and women from adults?

The Supreme Court ‘s words in the case of Khushboo are sobering. It said: “The concepts of social morality are inherently subjective and criminal law cannot be used to interfere unduly with the domain of personal autonomy.” Public display of affection is therefore still highly debatable because of concepts of social morality that do not have a strict definition of standards.

The majority of the suits are filed in accordance with Section 294 of the Indian Penal Code (IPC), which provides for the following ingredients to cover an offense:

The guilty is punished with an imprisonment of three months which may extend, or with fine or with both.

How to determine the term ‘Obscenity’?

To the judicial recognition of the temporal variations in notions of obscenity, we must add that cultural variations also exist in an immensely diverse country such as India. Holding the most vocal or dominant notions of decency and obscenity as the standard Indian notion of decency means that weaker cultures are criminalized today. When changes are taking place, preferences and trends clash and the challenge facing us as academics and administrators is to find new answers to these conflicts.

Since this law does not give explicit definitions of “obscene acts,” police and lower courts are blatantly misused to harass couples. What is obscene and what is not must be clarified and defined urgently. India is a conservative country, and any new developments are bound to shake our systems.

PDA Regulations across the World

The public display of affection ranges from a mild handshake to compassionate kissing, and the essential element of public annoyance must be established in order to bring an act within the scope of an obscene act punishable under Section 294 of the IPC.

PDAs are intended for the level of affection that can be measured in public spaces as appropriate. As young people, we should know about the difference in this fine line of intimacy on either side.

This country in which we live will only be at the forefront of the world if its people are not held back by such a trivial pursuit and it is equally our responsibility to ensure that this is achieved.

Battered Women Syndrome : A need for defence in India