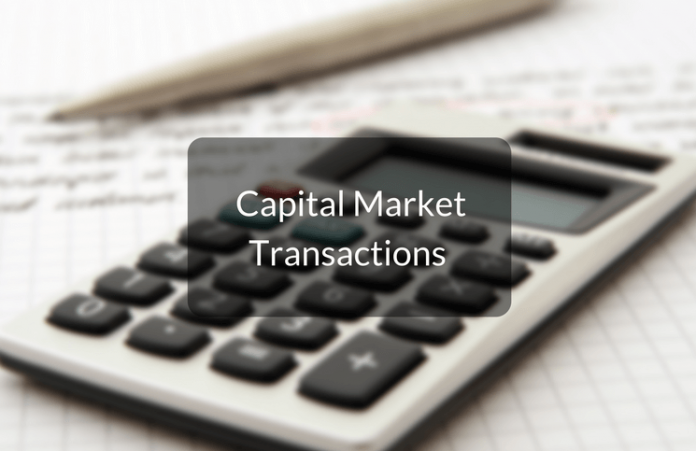 In this blog post, Piyush Bajaj, of Amity Law School, Noida, pursuing a Diploma in Entrepreneurship Administration and Business Laws from NUJS, Kolkata, describes the role of lawyers in capital market transactions.

Capital market is a market where buyers and sellers engage in the trade of financial securities like bonds, stocks, etc. The buying/selling is undertaken by participants such as individuals and institutions.

The Investment in the capital market can be done either in the new issues or in the existing securities.

The trading of stocks and bonds in the capital is not easy for the novice and not even for the seasoned investors. It’s difficult to predict the trends of a capital market.

Every investor wants to play safe with their investments. There are financial advisers available to guide the investors telling them where to invest and where not to. There are stock brokers also who are experienced and eligible to guide people with stock and bond investments.

Suggestive Read: The prerequisites to start investing & trading in the Stock Exchange.

When a government wants to raise long-term finance it will often sell bonds to the capital markets. In the 20th and early 21st century, many governments would use investment banks to organize the sale of their bonds. The leading bank would underwrite the bonds and would often head up a syndicate of brokers, some of whom might be based in other investment banks. The syndicate would then sell to various investors.

For developing countries, a multilateral development bank would sometimes provide an additional layer of underwriting, resulting in risk being shared between the investment bank, the multilateral organization, and the end investors. However, since 1997 it has been increasingly common for governments of the larger nations to bypass investment banks by making their bonds directly available for purchase over the Internet.

Many governments now sell most of their bonds by computerized auction. Typically large volumes are put up for sale in one go, a government may only hold a small number of auctions each year.

Some governments will also sell a continuous stream of bonds through other channels. The biggest single seller of debt is the US Government, there are usually several transactions for such sales every second which correspond to the continuous updating of the US real time debt clock.

Most capital market transactions take place on the secondary market. On the primary market, each security can be sold only once and the process to create batches of new shares or bonds is often lengthy due to regulatory requirements.

On the secondary markets, there is no limit on the number of times a security can be traded and the process is usually very quick. With the rise of strategies such as high-frequency trading, a single security could, in theory be traded thousands of times within a single hour.

Transactions on the secondary market don’t directly help raise finance but they do make it easier for companies and governments to raise finance on the primary market, as investors know if they want to get their money back in a hurry, they will usually be easily able to resell their securities.

Sometimes however secondary capital market transactions can have a negative effect on the primary borrowers, for example, if a large proportion of investors try to sell their bonds this can push up the yields for future issues from the same entity.

An extreme example occurred shortly after Bill Clinton began his first term as President of the United States; Clinton was forced to abandon some of the spending increases he’d promised in his election campaign due to pressure from the bond markets.

In the 21st century, several governments have tried to lock in as much as possible of their borrowing into long-dated bonds so, they are less vulnerable to pressure from the markets. Following the financial crisis of 2007–08, the introduction of Quantitative easing further reduced the ability of private actors to push up the yields of government bonds, at least for countries with a Central bank able to engage in substantial Open market operations.

“There are lots of laws which regulate the trading of loans and debts like whether they are public or privately traded. Lawyers also get involved in creating the product: the packaging of loans and selling of the interests in them.”

Lawyers are key players in the transactional processes which permeate the world of capital markets. They advise debt and equity issuers and the investment banks which structures and sells the financial instruments.

The Role of Lawyers includes –

Much of this type of activity is cross-border which means considerable time need to be spent working out how various regulations fit together and liaising with local lawyers.

For Example, it is not unusual for a UK firm to lead on the IPO of a Kazakh company, listed in the EU, with offerings in other jurisdictions, including in the USA. And there’s nothing cookie-cutter about all that.

When it comes to drafting documents, there are key clauses to get right and in many cases, huge volumes of documents to prepare and amend.

At university, the longer the essay the more likely you were to stay up all night, nothing much changes in a law firm.

Negotiating contracts is a big part of the job. There are a lot of contracts which need to be signed off by a lot of parties and every contract is of great importance to every party.

As such, negotiations can be protracted. Issuers want the best terms. Investment banks need the clauses to be acceptable to their internal credit committees and in the case of securities, they want terms that make the product optimal for selling. Investors are usually not involved in the negotiations; however, if they don’t like the way the instruments are structured, they won’t buy them.

Regulatory and other approvals are a necessary step. They range from simple listing approvals for frequent bond issuers, to more time-consuming activities like a first listing approval of a securitization of Russian credit card loans on the London Stock Exchange. Ratings agencies also require legal advice when determining a product’s rating.

Long hours, complex contracts, demanding clients – What is the attraction? The opportunity to work with a client on a huge transaction; the sense of teamwork involved when grafting alongside people from banks, client companies and other law firms; the fun of negotiation and the buzz of finally creating a transaction that complies with all the different laws and regulations and which an investor will still want to buy.