This article is written by Yash Jain, a third-year student of Institute of Law, Nirma University. This article talks about the Central Bureau of Investigation from its origin to its current position in India.

The bureau in the initial years, handled matters of corruption by the government servants as notified by the central government to the bureau, but with the passage of time and an increasing number of public sectors, CBI started handling matters of those working under the public sectors. It was from the year 1969, after the nationalization of banks that CBI widened its ambit to cover public sector banks and its employees under its purview. With this CBI started gaining its reputation so that the apex court and high courts also started assigning cases to it, with resources for investigation high-level complicated cases, CBI in today’s time handles the cases of murder, kidnapping and terrorism as well.

The CBI is headed by the director which has a term of two years and is selected through a difficult procedure. The founder director of CBI was Mr D P Kohli, during his long tenure of 5 years, firstly as inspector general of Special Police Establishment and then founder director of CBI laid the foundation and set the graph of agency for high growth. The director of CBI is an IPS officer of director general of police rank selected by a committee comprising of Prime Minister who is the head of the committee, leader of the opposition of Lok Sabha who acts as a member of the committee and Chief Justice of India or any other Supreme Court Judge appointed by the CJI, who acts as the another member of the committee. Where there is no recognised leader of opposition in Lok Sabha, leader of the single largest opposition party in the Lok Sabha will comprise as a member. Also, the views and recommendations of the outgoing director are taken into consideration during the selection procedure. The selection committee is empowered under The Delhi Special Police Establishment Act, 1946 while the composition of the committee has its place in the Lokpal and Lokayuktas Act, 2013. Earlier the constituting power of the committee was in the hands of Central Vigilance Commissioner.

Central Government shall appoint officers of the rank of SP and above in the CBI on the recommendation of a committee consisting of:

The Central Bureau of investigation has its headquarters in New Delhi having all its agencies in an 11- storey building. CBI major agencies or divisions are:

In total, it has about 5000 staff members, about 125 forensic scientists and about 250 law officers.

Provision of Prior Approval

Prior Approval of the Central Government is necessary before conducting any enquiry or investigation into an offence committed by the officers of the rank of joint secretary and above in the Central Government and its authorities. A Constitutional Bench of the Supreme Court held that Section 6A of the Delhi Special Police Establishment Act, which grants protection to the joint secretary and above officers from facing even a preliminary inquiry by the CBI in corruption cases, was violative of Article 14 of the Indian Constitution. Section 6A of the Delhi Special Police Establishment Act (granting protection to one set of officers) is directly destructive and runs counter to the object of Article 14.

Ground for Right To Information

Central Bureau of Investigation is exempted to provide Right to Information to the public. The exemption was granted on the ground of “National Security”. The set exemption was also given to agencies like the National Investigating Agency (NIA), the Directorate General of Income Tax Investigation and the National Intelligence Grid (Natgrid). Without setting a blanket ban on Right to Information for the public, the CBI can take advantage of the provision of “in the interest of national security”. At the same time, CBI has also the right to deny information relating to an investigation of on-going cases, whether of corruption or of other common law crime or terrorism-related. The ban was criticized by the Central Information Commission and RTI activists, who said that the blanket ban on RTI violated the purpose of Right To Information Act, 2005.

There has been a big decline in the conviction rate of cases investigated by the Central Bureau of Investigation. Official figures say that the conviction rate was close to 71 per cent in 2010 but declined to 67 per cent during 2011-12. After the general elections of 2014, the rate rose marginally by two per cent. But for the past two years, it has dropped to 66.8 per cent. 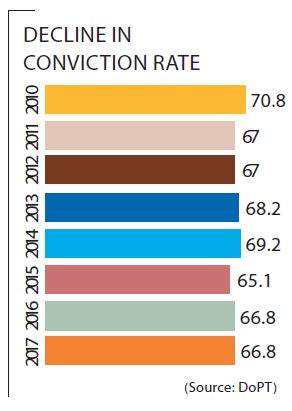 The CBI has always been into news and controversies for some or the other reasons. In the latest case of CBI v. CBI, there was a conflict between CBI director Alok Verma and CBI special director Rakesh Asthana. In October 2017, Rakesh Asthana was promoted to the post of special director of CBI. Alok Verma, who was the director of the CBI at that time, questioned his promotion because Rakesh Asthana was accused in a corruption case known as Sterling Biotech Corruption Case. Alok questioned to Central Vigilance Commission on promoting a person who is accused in a corruption case and whose decision is still pending. But, CVC rejected the objections of Alok Verma. When the case reached to SC, the apex court denied interfering in the matter and hence the promotion of Rakesh Asthana was upheld.

In Oct 2018, CBI raided the office of Asthana accusing him of taking bribery in Moin Qureshi Case. From there the name that hit the headlines is CBI v. CBI case. Rakesh Asthana in his defence said that he was not the one who took bribery, but it was the CBI director Alok Verma who took the bribery. The government interfered and gave both the officers an indefinite leave from their offices. In the meanwhile, government-appointed interim chief Nageshwar Rao whose decision also raised many controversies. The interim chief will only administer administrative powers and no policy decisions can be taken by him.

In another recent controversy of CBI, State Governments of Andhra Pradesh and West Bengal withdrew general consent given to CBI to investigate cases. They have lost faith in central agencies like CBI to their misuse by the Prime Minister at the central level.

After CBI was referred to as a “caged parrot speaking in its master’s voice” and further as “It’s a sordid saga that there are many masters and one parrot,” by the apex court, CBI has been in the limelight in recent years. CBI is India’s one of the supreme investigation agencies. From years after years, the body has played a predominant role in curbing corruption and bribery cases. After such a vast role that CBI handles, it is not easy to maintain the same level of effectiveness every time. Sometimes some things are meant to happen which cannot be escaped. The recent controversies of the Central Bureau of Investigation are some of the examples of those mishappenings. But that does not mean in any way that people will lose faith over CBI that in all circumstances conducts all investigations in a free, fair and impartial manner as per the law. People should have their trust and faith in CBI irrespective of the fact that the CBI has faced harsh criticism and being in the spotlight in recent times.

The doctrine of privity and exceptions to its application