This article is written by Aryan Chaudhary, pursuing a Certificate Course in Arbitration: Strategy, Procedure and Drafting from Lawsikho.com. Here he discusses “Challenges for Arbitration in India”.

According to recent reports, India is estimated to have 3.53 crore pending cases in total, where 58,669 cases are pending in supreme court, 43,63,260 pending cases across all high courts and a whopping 3.11 crore pending cases only across all District and Subordinate courts in India. Despite these statistics, more and more people are tilted towards the judiciary to resolve their disputes. Alternate dispute resolution methods are very helpful and very crucial for any business firm. It helps them to resolve any disputes internally and with a greater pace than any judicial system can ever do. The parties involved in an arbitration proceeding have power to add their own terms and conditions, like they would do in any other form of contract or agreement. 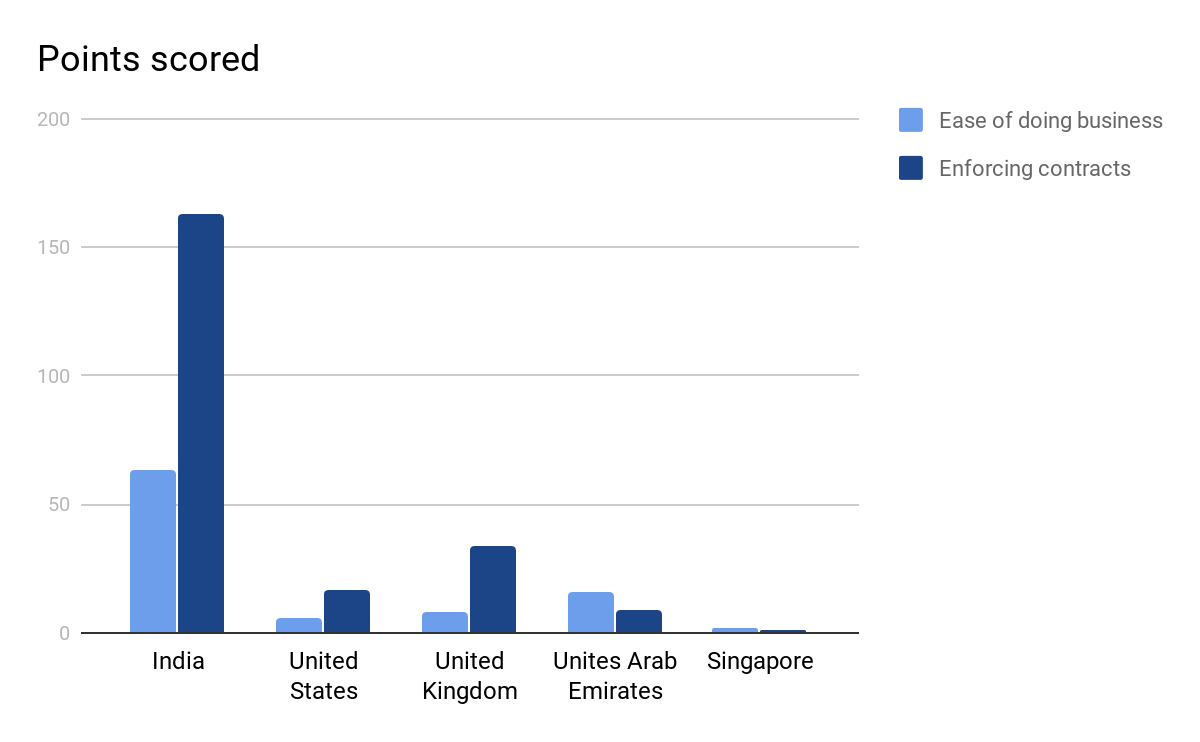 India ranked at 131 out of 189 countries in 2016 World Bank ranking for ease of doing business.

According to 2019 rankings, India has gained 63th rank out of 190 countries, while the United states ranked 6th, United Kingdom ranked 8th, United Arab Emirates ranked 16th and Singapore ranked at 2nd place for Ease of doing business 2019. On the other hand, India has a very lower ranking in Enforcement of contracts, that is, 163, while it may have improved in comparison to before, it is still very low. Singapore ranks at 1st place. Similarly, other countries ranks in enforcement of contracts are as follows:

According to the data mentioned herein, it is clear that Singapore has a better framework in regard to conducting business activities. Many business houses in Singapore opt for Alternate Dispute Resolution methods like Arbitration in their contracts and agreement for a speedy method to resolve disputes. And hence, it is clear that Arbitration has many advantages and useful applications.

The present paper focuses on the reasons for slow growth of arbitration in india. But, first we should discuss arbitration and the process of arbitration to better understand and evaluate the topic in question.

Arbitration and its Process

Reasons for Hindrance in Growth of Arbitration in India

The Constitution of India provides ‘one’ with many reliefs and aims to deliver justice to each and every person, who has been wronged. One such relief is the Process of arbitration that has been provided under Arbitration and Conciliation Act, 1996 (A&C Act). But due to the following reasons, Arbitration in India has not grown properly as it is accepted to be:

Although India is moving towards modernisation, it is yet a developing country. Which means, most people are ignorant towards arbitration and still trust courts more than alternate dispute resolution. This is not necessarily a bad thing, putting faith in one’s judicial system, but when the citizens of a country are ignorant and are unwilling towards change, this kind of orthodox thinking can really harm rather than helping anyone.

The Arbitration and Conciliation Act was introduced in 1996, and last amended in 2015. In India, there is a serious need for introduction of more comprehensive law regarding arbitration process and proceedings. The law makers need to extensively study the problems regarding the needs and requirements of business houses, that usually deals with arbitration proceedings. The laws must become strict and more carefully elaborated so that more and more people gain assurance in Arbitration than the Judicial System. In simple terms, most of the people are still not willing to take risks or a leap of faith regarding matters of large magnitude that they may face in a business.

One of the major issues due to which Arbitration is not growing in India is because of lack of awareness among the people. Some businessmen, advocates or legal advisors are only aware of the situation relating to arbitration proceedings and due to this unawareness many small scale businessmen or various newcomers who are not aware of such remedies are left out of the scope of such proceedings.

The above mentioned points are the main reason as to why arbitration is not growing faster in India. And now, we must discuss how we can overcome these problems, so as to create a better image of India as a business and arbitral destination.

Addressing Issues and Overcoming them

Among the people is the first and foremost need, if we want to create a better position for arbitration in india.Messaging is critical. Promoting arbitration and, therefore, preventing private players to rush to the courts without resorting to the relevant provisions of arbitration in the contract, must be a goal. If people are unaware of their rights, they can never seek justice. Keeping this in mind, it is very essential for us to create awareness about arbitration, it’s needs and its importance.

Should be introduced. India will not have a robust domestic arbitration environment unless institutional arbitration becomes mandatory. This can only be done if arbitration agreements mention the specific institution that will conduct arbitral proceedings.

Minimum court intervention is required. Arbitration is an Alternate Dispute Resolution (ADR) method, which means resolving disputes by some other method than courts, and even then Courts are allowed to intervene in arbitration proceedings, the whole concept of ADR is lost. Court intervention should be kept to minimum and in check, like there must be a limited scope to challenge the arbitral award  under Section 34 of Arbitration Act, 1996.

Introduction of proper laws is also a necessary requirement in such scenarios. Arbitration laws are required to be amended on a regular basis, and are crucial if our goal is to improve the conditions of the arbitration in India.

Indian legal system needs a way to deal with cases that are pending in the courts, and arbitration has proved itself a boon in this regard. Arbitration is not only helpful in reducing the excess burden that is put upon the Legal System but is also helpful in many more ways, like faster decision making, less costly, parties can put forward their own terms and conditions, etc. If the above mentioned reasons are somehow overcome, and both legislature and judiciary keep a strict check on arbitration laws, growth of arbitration in India is certain.

Development related to FDI in India in recent years