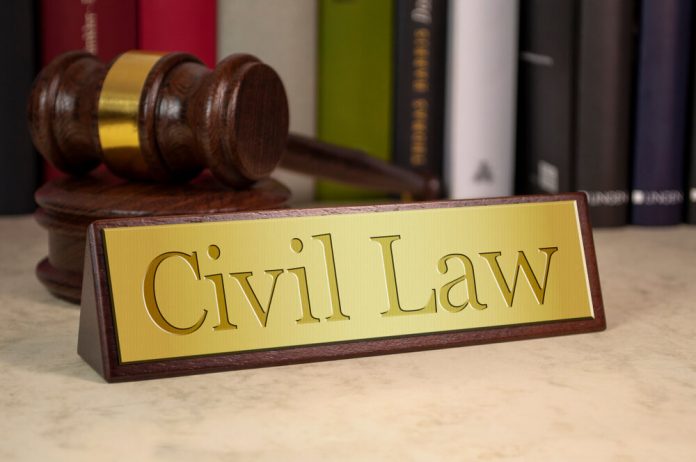 This article is written by J Jerusha Melanie, a student of SRM School of Law, Tamil Nadu. This article seeks to explain the concept of Civil Law, including the difference between civil, criminal, and common law.

Anybody having a basic understanding of the legal systems around the world will know that there are broad branches of law. Generally, the branches are-

Categorising the above- mentioned branches plays a crucial role in the ease of proceedings, and ultimately, the effective rendering of justice. This article will try to explain all about the branch of civil law specifically.

The term civil law is derived from the ancient Roman term “jus civile” literally meaning citizens’ law, which was used to denote the law enforced exclusively in the city of Rome. It is also called Romano-Germanic law.

Civil law is a system of law or body of rules dealing with the civil or private rights of citizens and not the public at large. It is primarily concerned with the private relations between two or more citizens and is generally codified.

Civil law, as a legal system of codified law, was introduced by the ancient Roman Law called the Corpus Juris Civilis (meaning Body of Civil Law). It is a collection of legal works in jurisprudence, issued from 527 to 565 AD by the imperial order of Justinian I, a Byzantine Emperor. For obvious reasons, it is also known as the Code of Justinian. It was made under the direction of Tribonian, a notable jurist in Justinian’s Court in Constantinople.

The concepts in Corpus Juris Civilis then spread all over Europe. Though not as influential as in its golden days, it still serves as a basis for modern civil law systems around the world.

Where can we find Civil Law

Some of the countries that follow civil law systems are listed below:

The following are the predominant features of civil law:

Relating to the private rights of citizens

As aforementioned, civil law exclusively deals with the private rights of citizens. It applies to the disputes between two or more individuals or legal entities, concerning any legal relationship or obligation. It is enjoyed by the citizens who inhabit a particular state which commands obedience through the judicial processes. Civil law aims to operate in two ways:

Civil laws are almost always a set of codified laws. A codified civil law consists of a series of articles in the form of general rules, that are flexible enough to be applied to concrete circumstances. Such an application, however, requires judicial interpretation, considering the ‘spirit’ of the code.

The codification of civil laws has the following advantages:

One of the exclusive features of civil law is that it imposes civil liability on the offender. Civil liability refers to the obligation of a person to compensate for the damage caused to another person or his property. This means, the citizen who committed a civil wrong against another citizen, is liable to compensate, in specific, the citizen whom he wronged. There exists a one-to-one obligation to compensate in civil law. This is contrary to criminal law, wherein the criminal is sentenced or fined for a crime affecting society at large.

The extent of application of civil laws may subjectively vary depending on the territory, citizens, etc.

Civil law is an incredibly exhaustive branch of law, covering a plethora of disputes that concern the rights and obligations of citizens. The following are a few branches arising out of civil law:

Contract law is a branch of civil law that governs, enforces, and interprets agreements related to an exchange of goods, services, properties, or monies. It does not just confer the contractual rights and obligations of the contracting parties, but also provides the remedies available to the injured party. The contract law also prescribes in what way the remedies can be availed.

The statute governing contract law in India is the Indian Contracts Act, 1872, which defines a contract as “an agreement enforceable by law” (Section 2(h)). The Indian Contract Act, 1872 enumerates various types of contracts like contracts of bailment, indemnity, agency, etc. It also specifies when a contract is valid, void, or voidable.

Property law is that branch of civil law which deals with the belongings of citizens. It governs the rights of citizens over the use or transfer of their own property and restrictions applicable to them regarding others’ property. There are broadly two types of property- real and personal property. Personal property refers to moveable and tangible (or intangible) property like vehicles, furniture, stocks, etc. Real property refers to the immovables like land, buildings, etc.

Some of the statutes governing property law in India are the Transfer of Property Act, 1882, The Indian Contract Act, 1872, Indian Easement Act, 1882, etc.

Family law governs the relations and interactions among citizens of a particular family. It provides the rights and liabilities of family members in the aspects of divorce, marriage, adoption, maintenance, etc.

A tort is basically a civil wrong, done by a person or entity to another, which results in his injury or damage to his property. Under civil tort law, the aggrieved party can recover damages from the wrongdoer. Generally, tort law is uncodified. Examples of tort are trespass, negligence, defamation, etc.

Corporate laws govern the rights and liabilities concerning the functioning of corporate entities, that are, companies. The corporate Section of civil law regulates the formation, winding up, investments, etc. of the company. A few of the statutes relating to corporate law are the Companies Act, 1956, Sale of Goods Act, 1930, Indian Partnership Act, 1932, etc.

As per Ivor Jennings, administrative law is the one which determines the organisation, power and duties of administrative authorities. It pertains to the functioning of the executive branch of the government. It is generally uncodified; however, there are specialised courts or tribunals for administrative law-related matters.

Generally, there are 4 types of cases decided under civil law:

As afore-mentioned, a tort is basically a civil wrong, done by a person or entity to another, which results in his injury or damage to his property. A claim under tort law can be classified as:

Examples of tort claims are

Claims for breach of contract arise when one or more of the contractual parties fail to fulfil their contractual obligations. Examples of a contractual breach are:

Equitable claims are also called injunction suits. The desired outcome of these types of cases is to stop someone (either an individual or legal entity) from doing a certain act, rather than getting monetary compensation. Equitable claims may conclude in the court asking the wrongdoer to:

Reliefs and remedies under Civil Law

The very purpose of a suit under civil law is to restore the rights of the aggrieved party, apart from protecting it. The relief and remedies provided to him are determined by the appropriate Court or tribunal using the relevant statute, depending on the injury or damage sustained by the aggrieved party. So, the declaration of relief is always discretionary to some extent. However, it was held in the case of Mysore State Road Transport Corporation v. Mirja Khasim Ali Beg & Anr (1977) that “ if the discretion is not exercised by the lower court in the spirit of the statute or fairly or honestly or according to the rules of reason and justice, that the order passed by the lower court can be reversed by the superior court”.

Broadly, there are four types of civil law remedies which an aggrieved party can avail of- monetary relief, specific performance, injunction, and declaration.

Monetary relief refers to the money damages that the aggrieved party can avail from the defendant. A few of its classifications are compensatory damages, consequential damages, nominal damages, liquidated damages, incidental damages, etc.

Injunction is judicial relief whereby the defendant is prevented or stopped from doing or continuing a particular act. It may be either permanent or interim (temporary). While a permanent injunction refrains the wrongdoer from performing the act for eternity, an interim injunction may be ordered at any stage of the suit to prevent the particular act till the suit ends.

Civil and criminal law are distinguished in the following ways:

Civil and common law are distinguished in the following ways:

Civil laws are the body of rules dealing with the civil rights of citizens. There have always been talks about a uniform civil code in India, applicable to all her citizens irrespective of caste, religion, gender, etc. Though Article 44 of the Constitution of India, 1949 prescribes it as a Directive Principle of State Policy, it is extremely challenging to bring about a “one-country-one-rule” in India, owing to the immense diversity of citizens. Nevertheless, albeit the variety of civil laws, India proves to be a near-perfect example of “unity in diversity”. Let’s hope the brotherhood of being an “Indian” transcends all the dissimilarities in opinions and identities forevermore.

No, India is a common law country.

A Civil Code refers to any statute which contains civil laws relating to corporate, family, etc.

Both. Under civil law, defamation falls under the Law of Torts; its remedy is monetary compensation. Defamation under criminal law is governed by the Indian Penal Code, 1860 (“the Code”) in India; Sections 499 and 500 of the Code deal with it. The punishment provided for criminal defamation under the Code is simple imprisonment for a term which may extend to two years or fine, or both.