This article is written by Lakshmi Pillai, who is pursuing a Diploma in Advanced Contract Drafting, Negotiation, and Dispute Resolution from LawSikho.

Precaution is better than cure. Before entering into any contract if we know what all documents are needed it will be quite helpful for us to make sure that the agreement gets into effect within the time.

For wills and trusts, you need to follow up on certain precedent conditions. Similarly, for business contracts also some specific conditions are laid down with regards to handling different activities to be performed by the parties before entering into a specific contract. Condition precedent can also be put forward for an ongoing contract, like to put a condition X which is required to be triggered for the work to be triggered in clause Y. Condition X here is the condition precedent which is required to be fulfilled to trigger clause Y.

There is a term called ‘condition subsequent,’ which is added in the contract as conditions that are to be fulfilled after parties enter into the contract.

NOTE- Condition precedent, in short, is generally termed as ‘CP.’

Importance of the checklist

A condition precedent is added in the contracts so as to make one party undertake certain actions before entering into the contract. While putting such conditions on one party, the party which was made responsible to do a particular act shall try to achieve the stipulated results within a certain point of time as mentioned in the pre-contract conditions. So if the party just sits down and waits to lapse over time then such an act will be considered invalid and the contract will not be enforceable. However, if the party is able to prove that he has taken reasonable actions as expected from him then as per the conditions, the party can enjoy the validity and enforceability of the contract. However, the specific actions which are required to be fulfilled will differ from case to case.

Applicability of the ‘principle of good faith’

In the European legal system, the ‘principle of good faith’ is applicable to such a party who is implied to do certain actions. The party which has to do the work can also invoke his right by not doing so. However, as explained before, the party needs to prove the reasonable conditions before using its right. The nature of the principle of good faith often depends on the particularities of the case. The efforts to be made by the party to put in the square of reasonability are not always possible to foresee. Therefore, to reduce the ambiguity it is always preferred to explain the minimum threshold /efforts or specific actions which are to be made by the party to come in the square of reasonableness. These conditions and steps in the contract will allow the party to decide when to invoke its rights and that will also reduce the circumstances of arising of the dispute between both the parties of the contract.

While drafting a contract, therefore, it is important not to have a generic clause that says that ‘the parties will try to make their best efforts to have the conditions satisfied within a specific period of time agreed between both the parties.’ Such a clause will not be useful and lead to ambiguity later on, not clearly laying out the implications of law which the party will encounter by not performing specific conditions as prescribed in the contract. Therefore, it is always better to specify the ‘reasonable efforts’ which need to be performed by the party. So that if the party does not follow it up, then monetary implications can be made as a remedy to the party who has suffered the loss due to the inaction of the opposite party.

While signing the agreement the conditions precedent shall be satisfied. Now it is up to parties to decide when they can consider a particular condition as fulfilled by the parties. The points on interpretation, the scope, and the extent can be addressed by the parties while engaging themselves in a pre-conditional agreement.

The decision regarding what needs to be there in closing conditions before entering into an agreement is generally decided by the lawyers on behalf of the parties. To decide the points the person requires foresight on what are necessary conditions to be fulfilled for a particular organisation or for agenda before signing the contract. The lawyer also needs to give attention to the details which are required to fulfill certain conditions.

Steps to be considered for satisfaction of the conditions 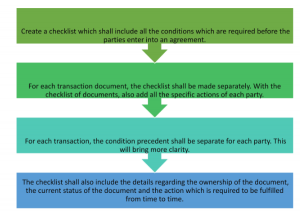 To create such a checklist, expertise in negotiation or drafting skill is not paramount. However, it requires foresight and a proper understanding of the transaction. Both the parties mutually decide the requirements of the condition precedent and it can be openly shared by the lawyers of each party. This checklist will help to tick off each closing document when they are fulfilled by the parties.

So, a condition precedent gives the other party rights to exist if another party does not fulfill any of the conditions. Now the opposite is also true. If one of the parties says that all conditions are fulfilled and on the furtherance of that if other party/ies take steps, then that can lead to an understanding that the other conditions are either satisfied or waived by the other party/ies. This point will be fair if honestly both the parties completed the actions which were specified in condition precedent. Clearly, if a party pursued the closing on the pretext of the other party’s statement that all conditions were satisfied and it appears that a material adverse change has occurred (triggering a MAC-condition not to be satisfied), the legal concept of fraud or even mistake would imply a right to reverse the closing and to claim damages. Therefore, this would result in the triggering of the Lex Mercatoria principle which states that “no-one may set himself in contradiction to his own previous conduct (non concedit venire contra factum proprium)”. To avoid such problems parties generally add this particular clause:

“each of the following conditions be satisfied or waived.”

Generally, an express ‘waiver effect’ is not required. As a better alternative, the parties can also agree to have a ‘condition precedent certificate’ which states the conditions which are fulfilled and not fulfilled before contracting parties enter into a final agreement.

The need and essentiality

There is an interesting case on this from the New York Court of Appeals on the topic of ‘waiver of condition precedent’.

In the case of Clark v. West , the NY Court of Appeals ruled that, if contracting parties while entering into a contract put some conditions to be fulfilled while the contract is running, some conditions can be waived off, if the subject matter of the contract essentially is not affected because of non-fulfillment of the condition by one party.

The facts of the case are as follows- an expert hires a ghost-writer to author a book for him. In the agreement, there was a condition that the ghostwriter shall abstain from the use of intoxicating liquors during the book writing period for full payment. In this case, NY Court of Appeal ruled that the condition can be waived if the ghost-writer produces the final deliverable work even if he fails to abstain himself from the use of intoxicating liquors during the period of book writing. Thereby, we conclude that focus shall be on the subject matter or the output destined rather than on conditions. A condition precedent is made to remove the obstacles from the attainment of the specific subject matter. If the particular condition does not harm the output then certainly the requirement of condition precedent shall be waived off by the contracting parties.

In cross-border and non-English law loan finance transactions condition precedent satisfaction letter/certificate is generally issued after the completion of the CP checklist. The list contains specified documents which are required to be prepared or collected prior to and at the first drawdown under a loan facility agreement.

This letter is certified when the lender’s agent (lawyer) to the lender confirms the receipt of the documents as specified in the condition precedent checklist under a facility agreement (which is also known as a loan agreement).

Every shareholder agreement has some basic clauses which are present in the shareholder’s agreement. They are as follows:

There can be three parts to the entire process of the agreement.  They are as follows:

Under the closing compliances we can have further two sets of compliances:

At closing, the following clauses shall be included:

which are required to complete the sale and to transfer all rights from a vendor to the purchaser with regards to investment.

Compliances which are to be completed by the Vendor (the compliances will vary from party to party, however, the discussed ones are general ones)

Compliances which are to be completed by the purchaser

A checklist of condition precedent conditions is always beneficial. A foresight regarding the requirement of a particular transaction will help to reduce the time wasted otherwise to collect all documents. The CP checklist is also important so that the parties before entering into a contract can verify the documents peacefully. This condition precedent can also reduce the dispute which might have arisen. So before entering into a contract, have conditions precedent set which will essentially set the transaction goes on at ease.