In this blog post, Shubham Khunteta, a student of National Law University Odisha, Cuttack, who is currently pursuing a Diploma in Entrepreneurship Administration and Business Laws from NUJS, Kolkata, discusses the conditions precedent clause in investment transactions.

Whenever a protected investment transaction is entered into between the investors and investees, they come up with certain clauses so as to preclude any detrimental transaction, which helps in maintaining the good, comprehensive and harmonious relationship between them. These clauses are quite essential to validate such transactions because if they are not bonded and written well, there can be deleterious consequences that can be legal, social, personal, etc. Among these clauses, one such clause is conditioned precedent clause that underscores the conditions regarding compliance, approvals from the regulating authorities, prescription by the Article of Association, commonly agreed terms, to be settled first to make the transaction completed after its execution into the agreement. 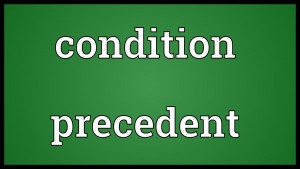 The share purchase agreement and the share subscription agreement, entered into by the buyer for the purpose of investment, provide the date by which each of the conditions precedent are to be complied with, and if such conditions are not fulfilled, then although the agreement is executed, the termination of it can be done by the buyer before the closing of transaction.

In the investment in securities of the company by the investor, investor needs to see that various approvals and requisite actions such as, before completing the transaction, the need if arises and requires for amendment to companies Article of Association necessitating shareholders’ approval should be done as a conditions precedent, so as to complete the investment transaction. This whole work is carried out after the execution of agreement but before the completion of transaction i.e. in between the period the agreed period. During that period, negotiations for waiver of certain unnecessary conditions and approval relations confabulations are made, and if the common ground is arrived at, then the transaction can be said to be completed if it satisfies the conditions.

Some common conditions precedent include:

The Shareholder Subscription Agreement and Shareholder’s agreement solidify the investment, but the investor should be guaranteed that equity is there to be provided and that it is “clean” i.e. there is no contestation to the equity and that it can be distributed without worries of litigation. Additionally, the investor is allowed to carry out the due diligences, particularly the legal and accounting ones.

The conditions precedent to definitive document signature in the term sheets and presented should be fair, because there can be circumstances when a condition precedent can become unfair, though. For example – If an investment round was predicated on finding the co-investor, the new investor might require the co-investor before signature of the term-sheet. However, if the new investor is abnormally selective, this could hold up the necessary investment for the company. The investee should put a time-limit or a clause that states that approval should not be unreasonably withheld.

Another type of condition precedent is one before funding. These focus on actions that take place after signing the definitive documents, but before funds have been transferred, and the investment round considered closed. Some illustrations of such clause are-

For example: In the case of Mishapur Investment Ltd. v. ITO, question arose:

Whether the sale of shares was effected through an agreement dated 2-7-1997 or it was effected through an agreement dated 5-3-1999. Copy of the agreement dated 2-7-1997 is filed before us and from its perusal; we find that this agreement was executed between the assessee along with its group concern and British Gas Asia Pacific Holding (P.) Ltd. Through this agreement, assessee along with its group concerned expressed their desire to sell the shares of Gujarat Gas Company Limited and the purchaser, i.e., British Gas Asia Pacific Holding (P.) Ltd. has also expressed their desire to purchase it. In this agreement, certain conditions are stipulated which are to be complied with by the parties shortly. Through this agreement, the purchaser has also agreed to make the advance payment of consideration payable in clause 4, but, it should be subject to the execution and delivery to the purchasers of the custodian agreement together with the share certificate and executed shares, transfers in the blank for the 25,65,000 shares to be deposited therein. On satisfaction of the condition precedent referred to, the purchaser will instruct the remittance of the deposit into a designated account in the name of the purchaser with Barclays Bank, Bombay. From a reading of this clause 4, we would find that though the consideration was stipulated, parties were required to do certain acts on their part. If they successfully do that Act, and the part amount of sale consideration was passed to the vendor, shares would be transferred and it amounts to a valid sale of shares through balance amount is required to be paid after some time. In that eventuality, whatever interest earned on the due amount, it would not form a part of sale consideration. It may be either a business income of the assessee if the assessee is doing the business of investment in shares or income from other sources.

The Purchaser acknowledges that it is aware of the possible condition of approval that may be imposed by the Foreign Investment Promotion Board/ Secretariat of Industrial Assistance which is set out in the form FC (SIA) for applications for foreign investment and technology agreement.