This article is written by Anjali Dhingra, IInd year student, B.B.A. LL.B, Symbiosis Law School, NOIDA. In this article, the author discusses contract and agreements and the difference between the two. The article also discusses what agreements are contracts and what are not.

Contracts have always been an indispensable part of our lives. Knowingly or unknowingly, we enter into a contract hundreds of time in a year. Even when we buy candy, we are entering into an agreement with the shopkeeper. Every time we visit a restaurant or book a cab, we are entering into a contract. Although the law of contract is developing with time, the jurisprudence of contract remains the same. We know what a contract is all about but new situations arise every day and a new question appears in the mind that whether this particular agreement be regarded as a contract or not!

One of the common perplexities among people is recognizing the difference between a contract and an agreement. They are frequently used interchangeably. For example, when the owner of house hands over the rent agreement and says, “Please sign the contract”, this creates uncertainty whether the document is an agreement or a contract.

We come across ‘contract killers’ in movies who charge money to kill people. Have you ever thought, ‘Is a contract of killing someone for money, a valid contract?’ or ‘Can the man giving the contract sue the contract killer in the court of law saying that the other party has committed a breach of contract by not doing the job even after the payment of money?’.

How is an agreement formed?

To form an agreement, the following ingredients are required:

An agreement is, therefore, a promise or set of promises forming consideration for all the parties. [Section 2(e)]

If a 7-year-old boy is buying an ice-cream from an ice-cream vendor and giving Rs. 10 in return, it becomes an agreement. This is because the boy offers to buy ice-cream and the vendor accepts the offer which makes it a promise. The consideration for both was ice-cream and money respectively.

How is a contract formed?

A contract is a lawful agreement. In other words, an agreement enforceable by law is a contract.

Now, the law says that any contract entered with a person below the age of 18 years is not enforceable. In the above case, the deal between the boy and ice-cream vendor was an agreement but it cannot be termed as a contract because it is not legally enforceable.

Agreement and Contract: The difference 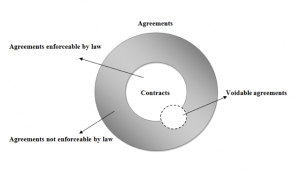 The concept of Voidable contracts: There exist some agreements which are enforceable on the part of one party but not on the option of other parties. It is on the discretion of that party if it is willing to enforce the contract or make it non-enforceable i.e. void. The voidable agreements are therefore both valid and void agreements. The dotted circle of voidable agreements denotes that they can be termed as void or valid on the discretion of one party thus covers the area of both valid and void agreements.

For example, if a person is buying a car which is just 3-4 years old and the owner lied about the year of manufacturing of the car thereby committing fraud. Now, according to the Indian Contract Act, 1872 fraud makes a contract voidable. Therefore, the buyer is on the discretion that he can either buy the car or not, whereas the seller is bound by the promise he made.

How does an agreement become a contract? 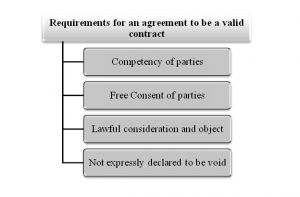 To make an agreement, a contract, we need to ensure that the following conditions are fulfilled:

The parties must be competent to contract

The parties entering into the contract are competent to contract when they:

At the time of entering into an agreement, if a person is of unsound mind or is disqualified by law; the agreement is considered to be void. On the other hand, an agreement entered with a minor is void-ab-initio i.e. void from the very beginning and thus cannot be enforced. For example, if a seven-year-old boy is buying an ice-cream; although he is entering into an agreement with the ice-cream vendor, it is not considered as a contract because being a minor; the party is not competent to contract. (Minor)

The consent must be free

The consent can be given expressly by words- oral or written or impliedly by gestures or surrounding circumstances. (Section 13)

But, the consent so given by the person must be free and not influenced by any outside force. The consent of a person is said to be free unless it is not caused by any of the acts mentioned below: (Section 14)

In the above-mentioned cases, the agreement becomes voidable on the part of the aggrieved party because the consent was not free.

Some examples are given for a better understanding of the concept:

Coercion: If Mr Batman gets some property sale agreement signed by Mr Superman under a threat that he will kill his mother, Mr Superman is on the discretion that he can enforce the agreement or not because his consent was obtained under coercion.

Undue Influence: The teacher asked the students that whosoever pays her Rs. 200, that student will get full marks in the viva. Now the teacher was in a fiduciary relationship with the students and was taking undue advantage of such a position. Thus, any such contract made by the teacher to student is voidable on the part of the students.

Misrepresentation: Mr Lal was willing to buy a car owned by Mr Peela. At the time he was buying the car, he asked Mr Peela about the colour of the car and said that he wants a pearl grey car. Mr Peela was an old and illiterate man who was not having much knowledge about colour differentiation. Mr Peela believed that the car is pearl grey and answered in affirmative.

Later on, Mr Lal came to know that the car was Metallic grey and not pearl grey. Here, Mr Peela is liable for misrepresentation and Mr Lal is free to continue the contract or not.

Fraud: If in the above case, Mr Peela was aware of the actual colour of the car but lied to Mr Lal; than he would have been guilty of fraud and such agreement would have been voidable.

The consideration and the object needs to be lawful

The consideration and object of an agreement are unlawful if it is:

If any of the agreement contains abovementioned consideration or object, the agreement becomes void. For example, entering into an agreement of killing somebody for money is considered to be void. A person cannot approach the court saying that I have given the money but the contract killer is not doing the job because the object was something which is forbidden by law and thus the contract is void.

Similarly, if you are bribing a public officer to get some official papers to you; the papers might be legal but the consideration you are paying is not lawful as it would defeat the provisions of Prevention of Corruption Act.

The agreement should not expressly be declared to be void

There are certain kinds of contracts which are expressly declared by The Indian Contract Act, 1872 to be null and void. The following are some of the agreements which are not enforceable in the eyes of law:

For example, if Devdas asks Paro not to get married for her entire life then he will give her new dress and shoes in return; it cannot be considered as a valid contract because the agreement is made in restraint of marriage.

Similarly, if the agreement is made to not to work for the entire life in exchange for a new flat, it will not be considered as a valid contract as it is in restraint of trade.

Also, if a father enters into an agreement with his son that the father will get him a new bicycle if the son scores 105% in his board exams. It will be considered a void agreement because it is an agreement to do an impossible act.

The above-mentioned conditions are required to be fulfilled in order to make an agreement legally enforceable. The agreement becomes void if any of the mentioned conditions are left unfulfilled except in the case of free consent where the agreement becomes voidable instead of void and giving the party, whose consent was not free at the time of entering into the contract, the discretion to continue the contract or not.