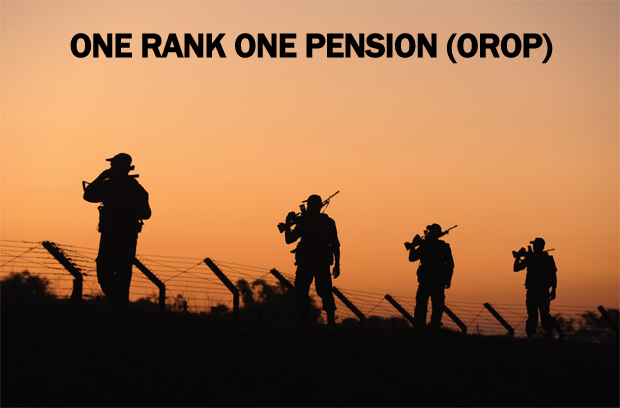 ‘People who protect us also need security’. The defence personnel after serving the nation require certain help after retiring. This help is given to them in the form of a pension. However, the problems arise when there is a disparity in this assistance provided by the government. To counter this challenge, the One Rank One Pension (OROP) scheme was introduced. The idea of the scheme started way back in the 1980s however, it was implemented in 2015. There are still various issues related to the scheme and there exists a conflict of interest among the ex-servicemen and the government on this issue. Thus, it has become important to analyze the scheme implemented to ensure a uniform pension system in the defence forces.

The main objective of One Rank One Pension is to ensure that a uniform pension is given to armed forces personnel retiring in the same rank and the same length of service. This pension will be paid irrespective of the date of retirement and any future increase in the rate of pension would be automatically passed on to the past pensioners. The basis of this scheme is the rank of the personnel and the length of service. For example, a captain who retired in 1980 after 10 years of service should get the same pension as a captain who retired in 2010 after 10 years of service. Thus, it aims to bring uniformity of pension among current pensioners and the past pensioners.

The idea behind pension equity started after a decision taken in 1973 by the Indira Gandhi government. The government decided to decrease the armed forces pension by about 20-40 percent. The decision was taken without taking the armed forces headquarters in confidence. The reason given by the government for taking such a decision was that it wanted to ensure a similar pension scheme for both defence personnel and civilians.

In 1986, the situation became worse after the government decided to implement Rank Pay. It reduced the basic pay of seven armed officers ranks of 2nd Lieutenant, Lieutenant, Captain, Majors, Lt. Colonel, Colonels, Brigadiers, and their equivalent in the air force and navy by a fixed amount. The veterans were not satisfied with this decision of the government. This created distrust between army personnel and the government.

As time passed, the protest started. Ex-officers started protesting by going on hunger strike and returning their medals. Various petitions were filed in the court by these personnel. After much protest, the government decided to appoint a 10 member committee to look into the matter of the One Rank One Pension scheme demanded by Ex-servicemen. The committee accepted the demands of Ex-servicemen and recommended that the scheme should be implemented by the government.

Finally, the new government was formed and the work towards implementation of the scheme started. However, the scheme was again debated on various issues. The matter is still being considered by the court. In the current development, a fresh plea has been filed in the Supreme Court to look into the ‘equalization period’ of the scheme.

Salient features of One Rank One Pension (OROP) were as follow-

Contributions of the Koshyari committee

The Koshiyari committee under BJP MP Bhagat Singh Koshiyari was formed to look into aspects of the One Rank One Pension Scheme. It was a 10 member all-party parliamentary panel. As it was headed by B.S Koshiyari, the committee was called the Koshiyary committee. They submitted their report on OROP in 2011.

The committee played a vital role in defining OROP which was accepted by the government as well as the veterans. The definition was based upon the demands of the veteran for implementing a uniform pension system. The report also mentioned the government’s reluctance to grant OROP and was ‘a typical example of bureaucratic apathy.’ Thus, the committee played a vital role in approving the demands of the ex-officers and justified their act of protest.

The implementation of the OROP will have the following implications-

As stated above the cost of implementation of such a scheme is around 8000-10000 crore every year. This poses a burden on the defence budget. Also, the amount required to clear the arrears required around 10000 crore rupees. About 28.4 percent of the total defence budget is spent on pensions. The expenditure on pension has more than doubled in 5 years since 2015 from 54000 crores to 1.33 lakh crore. Thus, the cost of pension is increasing at a very alarming rate.

A major issue involved with OROP is that a similar demand for pension can be raised by paramilitary forces or police. These forces like CRPF, CISF, BSF, or even police work in a risky environment. Thus, they can also demand a similar scheme. It would not be feasible for the government to develop a similar scheme for these forces

The personnel can also demand a high salary or hike in salary in order to get more pension when they retire. Although this is not a big issue still the administration should be ready for such challenges if it arises in the future.

This is also an issue that may hinder the proper implementation of the one rank one pension scheme. For evaluating the rates and paying the pension efficiently, the records are needed. However, these records have to be re-traced as some of the records are missing. Records date back to very early time and it is possible that with time certain records have been lost.

This issue is the main point of conflict between the ex-servicemen and the government. Earlier, the scheme did not take into consideration any premature retirement by the defence personnel. However, after certain deliberation, it was accepted that ex-servicemen whose premature retirement was valid and legal such as retirement due to injury, or accident. The conflict of interest due to the base year consideration between the government and ex-defence personnel is also a big challenge in one rank one pension scheme. To answer these concerns, the government formed a one-member judicial commission. However, the veterans criticized it. They want a multi-member commission with members consisting of defence personnel and the veterans.

This is a major concern that is still being debated. As stated above, this matter has reached the apex court and the decision is awaited. The provision of the scheme laid that the revaluation of the rate of pension would take place every 5 years. However, this was criticized by ex-defence personnel. They believe that such a provision would disrupt the very purpose of the scheme. They are of the view that such evaluation should take place every year and not after gaps of 5 years. Concerns regarding the improper implementation of the One Rank One Pension scheme was also raised in the case. However, the SC bench comprising Justices DY Chandrachud and KM Joseph acknowledged that the government had taken steps towards the implementation of the scheme and the main issue is to analyze whether equalization every 5 years will be feasible or not.

Thus, from the above issues, we can interpret that although the motive of such a scheme is to have a uniform pension system to remove the disparity among present and past pensioners. If analyzed critically there are certain aspects that are important while discussing the OROP. It is known that army personnel retires earlier than any civilian. Most of them retire before the age of 50 years. Thus, army personnel on average spend almost one-third of their life on the pension. The demand for OROP was made in the 1980s. At that time the average life expectancy was around 56 but in the present scenario, it has increased to 64. This has actually led to more strain on providing more long time pensions. The financial strain put forward by the OROP is evident from the doubled expenditure on pension since 2015.

However, it is important to maintain equity of pension. Especially for defence personnel who risk their lives for the country. There have been certain problems faced in the implementation of the scheme. However, most of the time it is due to politics that take place in the country. To sum up, the objective of the scheme is justified however concern like a financial burden on the country has to be addressed.

After analyzing the issues and challenges, there are certain recommendations that can help in making the One Rank One Pension scheme more efficient. Some of them are-

One Rank One Pension Scheme has brought more security to the future of the defence personnel. It is no doubt that such a scheme would motivate the people involved in such services to work with more dedication. As every aspect has both positives and negatives, OROP is also not an exception. It has some drawbacks but they can be solved. For this, coordination and proper communication are needed between the Ex-servicemen and the government. Though it is evident that due to this program, the expenditure on pension has increased but this should be seen in a wider scope with regard to benefits that it can have in the future not only for the defence personnel but also for the nation.

What career opportunities open up if you do LLM from a top university : how does the CLAT PG exam help you get into...