This article has been written by Anuja Saraswat, pursuing a Diploma in Intellectual Property, Media and Entertainment Laws from LawSikho.

Ever wondered why certain people prefer buying Roquefort over “blue” cheese or Champagne over “wine”? Most of the time, it is due to the quality of certain goods that are derived from their place of production. The customers often value such goods primarily due to the exceptional natural conditions of their region or due to their traditional production methods influenced by specific geographical factors. These goods with the kind of characteristics that resemble their specific region are given a tag of geographical indication or GI which gives an exclusive right to that particular region to use a name for such goods. A registered GI helps in protecting such goods from exploitation by third parties with respect to their special characteristics.

“Darjeeling” tea is one such product that was given the first GI protection in India in 2004. It is known to be a high-quality tea produced in the hilly areas of West Bengal’s Darjeeling district, in India’s eastern division. It has a distinct and naturally occurring character and flavor that has earned it the respect and admiration of various consumers all around the world for over a century. Therefore, to protect such patronage and prevent it from being misused, it was given protection under geographical indication so that the consumers could distinguish between Darjeeling tea and tea manufactured in any other part of the world. Over time, the protection of geographical indications, or GIs, has become a significant issue owing to its commercial perspective. It is protected both nationally and internationally as without adequate legal security, rivals who do not have any legitimate rights to the GI’s credibility will be able to ride roughshod over it. This article discusses how Darjeeling tea is protected under the GI tag reflecting the significance of its GI protection and it also gives an overview of both national as well as international standards established for the protection of Darjeeling tea under the GI tag.

How did Darjeeling tea get a GI tag?

Tea is the oldest organized manufacturing industry in India, and it continues to be the single greatest employer in the sector. The history of Darjeeling tea stems back to the British era in the 18th century when Dr. A. Campbell, the then superintendent of the Darjeeling district, planted seeds he purchased from the Kumaon highlands of North India near his residence, and the British Government, enthralled by the tea nursery’s success, decided to establish more tea nurseries in the region. Over time, the growth in plantation tea nurseries increased and became known for its quality, reputation, and characteristics and this is how Darjeeling tea gained its heritage.

However, after India’s independence, the ownership of the tea nurseries was shifted to Indian entrepreneurs. The main buyers of the tea are countries like Japan, United States, United Kingdom, Russia, and several other European countries like France, Netherlands, and Germany. Although most of the portion of what was produced annually was being exported to these countries, nevertheless most of it was blended with another cheaper tea but sold as Darjeeling tea taking the advantage of its rich heritage. Therefore, in order to curb this exercise of misappropriation and ensure supply of genuine Darjeeling tea, a compulsory process was incorporated wherein all the dealers of Darjeeling tea are required to enter into a license agreement with the Tea Board of India under the Tea Act, 1953 in exchange of an annual license fee to certify the authenticity of Darjeeling tea to be exported.

The Tea board of India

It is the sole administrative body established by the Government of India under the Tea Act 1953, which is responsible for the implementation of all regulations and policies pertaining to tea production in India. It has sole control over all the stages of tea plantation be it cultivation, processing, or even the sale of Darjeeling tea in India. It collaborates closely with the Darjeeling Planters’ Association, a Darjeeling tea producer’s forum, at various levels to protect and defend the treasured icon ‘Darjeeling tea’ and ‘Darjeeling logo’ as a geographical indication. Its primary objectives are:

In addition to this, the tea board of India has also registered Darjeeling’s word and logo as certification trade marks (CTMs) under the Trade Marks Act 1999 and The Geographical Indications of Goods (Registration and Protection) Act, 1999, to provide legal protection from misappropriation in India.

Protection of Darjeeling tea (word and logo) – a GI tale

Need for a GI

As discussed above, geographical indication, or GI, is a tag that is applied to goods that have a particular geographical origin and that have characteristics or a reputation that are accredited to that origin. So, when we look at “Darjeeling Tea,” in particular, it is a tea of premium quality, has certain distinctive features of flavor and quality, and more importantly, has a global reputation for over a century. These factors have led to the creation of such distinctive and exceptional taste and characteristics and therefore its GI protection was necessary. That is to say, proper legal protection is required to protect legitimate Darjeeling tea rights holders from the fraudulent business practices of various commercial enterprises. For example, tea from Kenya, Sri Lanka, and even Nepal has frequently been mislabelled or passed off as “Darjeeling tea” around the world. An example of Japan’s unauthorized use of the word ‘Divine Darjeeling’ wherein the application was opposed by the Indian Tea Board describes the challenges faced in protecting the word and logo. The logo has been provide below; 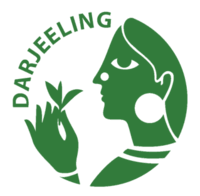 The Darjeeling tea’s word and logo are protected as Geographical Indications in India and as Certification Trade Marks in the United Kingdom, the United States, and India. The logo of Darjeeling tea is registered as a collective mark in Belgium, Luxembourg, Germany, Netherlands, Austria, France, Spain, Portugal, Italy, Switzerland, the former Yugoslavia, Egypt, and Lebanon, and as a trademark in Russia and Japan. In Russia, the word Darjeeling has been registered as a trademark. There are still some pending applications by the Tea Board of India for registration of the “Darjeeling word” as a certification mark in Australia, as a community collective mark in the EU, and as a collective mark in Germany and Japan.

In the last few years, the Tea Board has battled misappropriation and misuse of the Darjeeling Tea word in countries such as Japan, France, Russia, Norway, the United States, Germany, Israel, and Sri Lanka.

Therefore, adequate legal protection for this GI is necessary to prevent such misappropriation. Without proper GI protection both domestically and internationally, it would be difficult to prevent the misappropriation of Darjeeling Tea’s identity, whereby tea produced somewhere else would be sold under the Darjeeling brand, harming consumers and denying the Darjeeling tea business the premium price. The industry gradually realized that unless Darjeeling Tea is correctly promoted and branded, the company’s sustainability may be jeopardized and that GI protection, coupled with strict enforcement, can go a long way toward assisting the sector in improving its financial status as well.

The Indian GI act and registration

With the introduction of a law specifically dealing with the protection of GIs, India has created a sui generis system of GI protection. In India, the “Geographical Indications of Goods (Registration and Protection) Act, 1999” (GI Act) and the “Geographical Indications of Goods (Registration and Protection) Rules, 2002” deal with GI protection (GI Rules). The GI Act establishes a law that states that any entity, producer, or community of people is eligible to file for a G.I. It also explains the passing-off principle, which asserts that no one has the right to pass off his or her goods as those of another. As a result, the primary goal of a passing-off case is to defend a trader’s or producer’s name, reputation, and goodwill against any improper attempt to profit from them. Simply put, the Act aims to make geographical indications for goods such as Darjeeling tea easier to register and better protected. This would defend the interests of producers, manufacturers, and therefore consumers from being misled by the deception of geographical origin to the producer’s economic prosperity, as well as encourage geographically indicated items in the export market. The Registrar of Geographical Indications, who is also the Controller General of Patents, Designs, and TradeMarks, is in charge of enforcing the GI Act.

Recently, in October 2019, the green tea and white tea of Darjeeling have also been registered under the Act which will help in strengthening the GI protection of Darjeeling tea.

Registration: In India, the registration of GIs is not compulsory. However, Section 20(1) of the GI Act states that:

“No person shall be entitled to institute any proceeding to prevent, or to recover damages for, the infringement of an unregistered GI”.

A GI’s registration allows its registered owner and authorized users the right to seek infringement remedy. The GI Registry, which covers all of India, is based in Chennai, and the Registrar of GIs is the Controller-General of Patents, Designs, and TradeMarks, as per Section 3(1) of the GI Act. A GI can be registered for ten years in India, and it can be renewed for another ten years from time to time.

TRIPS establishes basic standards of protection at the international level, which the WTO members are required to follow in their national legislation. It has a two-fold protection system in place:

Another initiative taken at an international level is employing the services of the International Watch Agency. The Tea Board has employed the services of “Compumark”, a World Wide Watch agency since 1998 to prevent the misappropriation of the word “Darjeeling” and the logo. All occurrences of unauthorized use and attempted registration must be monitored by Compumark and reported to the Tea Board. Several examples of attempted registrations and unlawful use of the terms “Darjeeling” and “Darjeeling Logo” have been recorded as a result of Compumark’s appointment.

In light of the above analysis, it is observed that the Indian Tea Board has made progress in its pursuit of national Geographical indication recognition for the Darjeeling tea word mark and logo. This helps in ensuring the production and sale of genuine Darjeeling tea all over the world. The Tea exports from India are increasing, which will aid India’s economic development. This will also minimize market rivalry for Darjeeling tea breeders, allowing them to flourish economically and spread the flavor of Darjeeling tea over the world. However, international acknowledgment of Darjeeling tea as a geographical indication is yet to be gained, because of the fact that Article 23 of TRIPS provides additional protection for wines and spirits but not for other goods. The absence of a multilateral system of communication and registration for goods like Darjeeling Tea, which is accessible for wines and spirits, jeopardizes the international protection that would provide adequate protection if, for e.g. Article 22 does not give adequate protection for the legitimate owners of a GI. It is therefore pertinent for India to seek out extension of GI protection to other goods by amending Article 23 of the TRIPS.