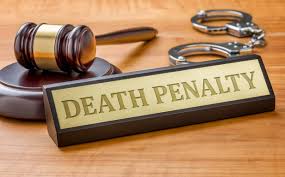 The Death penalty is a punitive measure, where the life of a person is taken by the State by following the due procedure of law. Whenever a person commits a crime that is grave enough, in the eyes of judiciary that he/she does not deserve to live anymore is hanged to death. In India, death penalty under Indian Penal Code is approved for murder, gang robbery with murder, abetting the suicide of a child or insane person, rape, waging war against the government and abetting mutiny by a member of the armed forces. Death sentence is also prescribed under some anti-terror laws for those convicted of terrorist activities. But generally, the court announces death sentence for murders that also in ‘rarest of the rare cases’ as stated by the Supreme Court in the Bachan Singh V State of Punjab (1980). This makes the death punishment a unique form of punishment because of the nature of irreversibility attached to it.

Though death penalty has existed since long back, recently there has been a huge uproar about the abolishment of capital punishment. Many countries have eradicated death penalty but it still prevails in around 58 countries today, with highest number of penalties being recorded in Iran and Iraq. India has recorded around 477 death penalties according to a research conducted by NLU-Delhi but the Supreme Court reports on 3-4 deaths per year.

As the nature of the penalty is irreversible, the law provides enough chances for scrutiny of the decision. If awarded by the lower court, death penalty should be assented by the high court of that state as to avoid any error [Section 366(1), CRPC]. Further the High Court can look into the case and can announce the judgment accordingly. Even after this the convict has a chance to appeal with the Apex Court [Article 134(1) (a) & (b), COI]. After the final verdict of the Supreme Court, there lies a last opportunity of acquittal for the convict.

Under Article 72 and Article 161, the Constitution of India has created a provision for leniency of capital punishment. Under these Articles, the President of India and the Governor of the respective state has the power to grant pardon or commute or remit the death sentence in certain cases. For this, a request for pardon is filed before the President or the respective Governor. In case of states first the mercy petition is sent to the Governor and if disapproved it is then sent to the Ministry of Home Affairs for the consideration of President of India. Similarly in case of Union Territories, it is first sent to Lieutenant-Governor / Chief Commissioner / Administrator. The Ministry of Home Affairs renders advice to the president about the petition and the President is bound to act in accordance to that advice. The power to grant pardon includes further examination of related factors that are pertinent to the sentence such as age, sex, mental stability and socio-economic conditions. The president need not provide reasoning for his decision.

Though the judiciary has no rights for reviewing the decision of rejecting the petition as held in Kehar Singh V. Union of India, but in Shatrughan Chauhan V. Union of India courts may review whether all relevant materials were scrutinized by the executive or not. According to the Apex Court if it is found that the executive has not touched upon each and every relevant area before rejecting the plea it will be the Violation of Article 21 of COI and the court will hence be able to commute the sentence of the convict. In Shatrughan Chauhan’s case the judiciary reprimanded the executive for its delayed functioning. The sentence can be commuted on the grounds like- delay in execution, insanity, solitary confinement, dependence on judgment per incuriam and procedural failure. Further, inordinate delay constitutes torture and violates law.

According to information released by the government under the RTI Act, of the 77 mercy pleas decided by Presidents between 1991 and 2010, 69 were rejected. Only 8 about 10% of those who wanted mercy were securing the scaffold. R Venkataraman rejected 44 mercy pleas, the most by any President. Current President Pranab Mukherjee has also not been merciful as such he has rejected 37 pleas in 4 years of his tenure. Whereas APJ Abdul Kalam has been quite merciful as he took up only 2 pleas and left behind dozens. Such irregularities prove that the Presidents allow their personal view to influencing their decision hence making it very subjective as to which convict may be granted plea and which may not.

Prisoners also have a right to dignity and execution of death sentence should be carried out in a quick and simple manner allowing the convicts to exhaust all legal remedies. Human dignity is one of the foremost right availed even by the death penalty holders enshrined in Article 21. Prisoners have a right to legal Aid and receiving written copy of mercy petition’s result. Regular health checkups are also mandatory. The court also stated that the government should carry put a post-mortem as to prove that the execution was carried out according to the guidelines.

Death penalty is still legal (might not be voted for) in India, though fiercely debated after the Afzal Guru case. So until this debate boils down to a conclusion, capital punishment stands tall and hence needs to be followed with due procedure of law. The president’s pardoning power can indeed save a human life and is the last resort for a convict to escape death. It is expected from the executive to be quick and fair in its decision. But still a parameter has not been fixed as to what amount of time taken will be counted as delay. Also the safety and living conditions of the prisoners often stand jeopardized. Also some presidents have been way too merciful while some sharp. The processes of law need to make sure that the convict is able to use all his legal remedies fully.