This article is written by Shivani Bharti, pursuing a Certificate Course in Advanced Criminal Litigation & Trial Advocacy, from Lawsikho.com.

There are salient legislations which govern the drug policy in India including but not restricted to The Narcotic Drugs and Psychotropic Substances Act, 1985 (hereafter: NDPS Act), The Prevention of Illicit Traffic in Narcotic Drugs and Psychotropic Substances Act, 1988, The Drugs and Cosmetics Act and Rules, 1940. These Acts and Rules help in curbing the complications that come with permitting the use of drugs for licit purpose and prohibition from illicit use.

In relevant time, under the NDPS Act, it is illegal for a person to produce or manufacture or cultivate, possess, sell, purchase, transport, store, and/or consume any narcotic drug or psychotropic substance; except for medical and scientific purposes in accordance with the relevant actionable law in India. The Act covers three classes of substances: narcotic drugs, psychotropic and psychoactive substances, controlled substances used for manufacturing aforementioned substances. It also provides for punishment in an attempt to commit certain drug offenses. Aiding, abetting and criminal conspiracy attract punishment on the same level as the principal offence under the Act.

For the reason that there is multitude of accessible reading material available on various drug offenses and its punishment, in this article I will mainly talk about the ignored area i.e scope of death penalty in drug crimes.

With topical knowledge of the NDPS Act, one can comprehend that it mainly deals with the offenses and regulations in matters of production, manufacture, possession, transportation, import and export of prohibited substances under the Act. Although the offenses are punitive, the question of harsh death penalty may seem debatable to some in this affair. The amendments and judicial pronouncements in this area over the years enunciate a likewise perspective.

Section 31A of the NDPS Act concerns death penalty. The NDPS Act penalizes offenders with capital punishment only in case of their prior conviction in “certain offenses.” It is important to know what constitutes these certain offenses, but before that, let us familiarize ourselves with Section 31.

The punishment mentioned under Section 31 of the NDPS Act is applicable for penalizing offenders of Section 31A. Section 31 talks about enhanced punishment for offenders having prior conviction of the offences punishable under the NDPS Act. He who has been convicted before under this Act will be punished for second and every subsequent offence with imprisonment for a term and fine which may extend by one and one-half times of the maximum term of imprisonment and fine mentioned in the concerning Sections of the NDPS Act. In case there is a mention of minimum sentence of punishment and fine, then the minimum limit would increase by one and one-half times too, provided the court may by stating reason impose a fine exceeding for which a person is liable.

Now Section 31A says that if any person who has been convicted before for commission of, or attempt to commit, or abetment of, or criminal conspiracy to commit any of the offences punishable under Section 19 (embezzlement of opium by cultivator), Section 24 (external dealings in narcotic drugs and psychotropic substances without previous authorization of the Central Government), Section 27A (financing illicit traffic or harbouring any person involved in such activity) of the NDPS Act or any other offense which involves commercial quantity of any narcotic drug or psychotropic substance— and is now further convicted on similar grounds by engaging in the production, manufacture, possession, transportation, import into India, export from India or transshipment of the narcotic drugs or psychotropic substances specified under column (1) of the table below involving the quantity which is equal to or more than as indicated in the table, by financing directly or indirectly shall be punished with punishment which shall not be less than the punishment specified in Section 31 of the NDPS Act or with death. 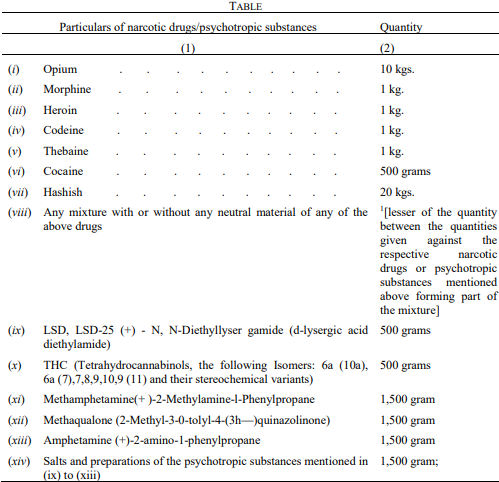 Section 31A also says that if a competent court outside India convicts an offender on the aforementioned grounds, such person will be dealt with as if he had been convicted in India itself.

Acquainting ourselves with relevant Sections of the NDPS Act gives us the knowledge that India does have grounds for death penalty for persistent offenders of the Act involving large quantities of drug dealing. It is to be noted that this provision where it stands today has been amended over time.

Amendments to this provision in the NDPS Act after enactment

The NDPS Act has been amended thrice in 1989, 2001 and 2014, after the Act became operative in 1985. Seeing the law develop around the world in framing stringent law and policy to deter drug trafficking and abuse, India in 1989 incorporated a new Section 31A in the NDPS Act making death sentence mandatory for repeat offenses. Thereafter, in 2001 Section 31A was amended to include death penalty for subsequent conviction and the scope for awarding this sentence was narrowed down to certain offenses as aforementioned. However after 13 years, an additional amendment came in 2014 making it discretionary for the judge to award the death sentence and otherwise award life imprisonment of 30 years.

After familiarizing ourselves with the amendments of this canon; it is important to know recent narrative on death penalty in these particular offenses.

In international arena, drug offenses do not constitute insofar grave for which capital punishment should be invoked. However, in India, judicial pronouncements and political talks in this domain do not propagate similar rationale; these offenses are considered to be deleterious which impact the society at large. Although, the 2014 amendment made death penalty optional, some politicians have time and again mentioned about making the law more stringent and harsher to curb drug menace mainly in the states in which we see utmost violation in spite of the NDPS Act in place.

To exemplify, Punjab’s drug abuse problem is considered to be an epidemic among youth and people of all ages. Recently, the state commissioned a drug abuse study, the only state to do it, and in 2015 the Punjab Opioid Dependence Survey was conducted which showed a figure of 230,000 people to be drug users in Punjab which means the figure stands at 836 drug users per hundred thousand people, in contrast PAN India figure stands at 250 per hundred thousand people. Nearly one percent of Punjab’s population is “Opioid dependent” according to the survey, which is greater than the global average. Added to that, in a report by the National Crime Records Bureau, by the end of 2014, Punjab recorded 44.5% of the total convicts under the NDPS Act which has been increasing over the years. The table below shows other indicators of the drug menace in the state according to the survey. 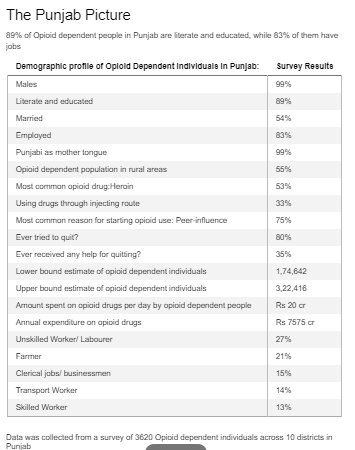 Seeing the increasing trend of drug use and dependence, introduction of death penalty among other measures were sought for first-time offenders as well in the state of Punjab. This was met with contention among public and policymakers. Further, the judiciary did not deter from its stand in the matter.

The walk from awarding mandatory to optional death sentences has been a ride for the judiciary as well. The Parliament narrowed down the scope to award the death sentence in 2001 when the status was still mandatory.  Before the provision was made optional in the 2014 amendment, the judiciary had its significant contributions to make to it.

Following a constitutional challenge by two drug offenders who were sentenced to death by NDPS special courts, in 2011 India became the first Court in the world to strike down mandatory death penalty for drug offenses. The division bench of Bombay High Court declared Section 31A of the NDPS Act “unconstitutional” through video conferencing. However, the law was not struck down but preferred to be read down, which meant the obligation on which death penalty for repeated offenders was adjudged previously was thereafter made discretionary. This order brought relief to a convict named Ghulam Mohammed Malik who was sentenced to capital punishment without any consideration to his circumstances and mitigating factor under the NDPS Act in 2008.

In a very recent judgement by Calcutta High Court in 2019, State of West Bengal v. Ansar Rahman, the Court held that the imposition of death penalty may or may not deter others from committing similar crimes in the future. The facts of the case were that the two appellants were found in possession of 3.5 kg and 50 kg of Heroin respectively. However, the first appellant was sentenced to death and the other was sentenced to 30 years of imprisonment and fine. Both the parties filed an appeal against their conviction by the special court. The court allowed the appeal by discharging the first appellant of death sentence and announced a rigorous punishment for 30 years, while the sentence for the second appellant was upheld.

Likewise, there have been several instances in which the Courts on appeal have overturned death sentences awarded by special courts constituted under the NDPS Act. It is safe to say that although the Act provides for optional capital punishment, the judiciary in India has adopted a trend by setting precedents that entirely does away with death penalty for drug offenses.

The concept of capital punishment or any other uncompromising penalty under any law revolves around the rationale to set an example and deter such crimes in future. In my opinion, however, this deterrent impact is rather limited because the offenders in drug cases are mostly incapacitated to their poor living conditions and are drawn to these heavy crimes either for money or as an escape from their substandard life.

It is to be noted that offenses like drug trafficking attracts harsher punishments because the stakes are higher in such crimes. Also, dealing with specific or stronger types of drugs attract harsher sentences too. In spite of a rigid law in place, pertinent reason for involvement in these types of crimes could be a person’s morale to get away with conviction and more importantly undermining the gravity of the offense. This is why provisions of law need to be preventive in nature rather than penalizing. There needs to be education and awareness on risks of drug consumption to mental and physical health. The government has dedicated policies and schemes to address these problems but the expectations have been unmet with the increasing drug menace in the nation. The painstaking work of rehabilitating the individuals of drug abuse needs to be taken to reduce the problem from its roots.

Awarding death penalty, life imprisonment, or harsher sentence for drug offenses which mostly does not germ from criminal tendencies owing to disagreeable circumstances of these offenders, is rather a quick fix show to sideline the collective responsibility of mitigating the problem altogether. Insofar, if decisive steps are not taken, we might not come out of the constant loop to look out for quick fix punishment rather than addressing the problem.