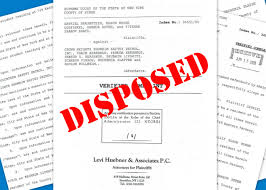 This article by Lavanya Verma describes what it means when a judgment reads as ‘case disposed’.

Case Status is Disposed. What does this mean?

The disposition date is not when the data are entered into the automated system but the actual date of dismissal or order.

When the case has been opposed due to issues other than those relating to facts and findings like jurisdiction, then the matter was looked into and said to be disposed accordingly.

The pleadings in the case were disputed, so it was heard by the court, and the judgment was passed by the judge based on the merits deciding the case.

When no one has opposed the facts and findings of the case it means uncontested. Thus, whatever has been filed has been accepted since no one opposed it and the case is disposed after hearing and now no more hearings are due further.

Suit was compromised after a keen contest and since nothing was left to decide with issues settled the matter was disposed.

The first task for a defense attorney in a criminal case is to determine whether there are any grounds on which the case could be dismissed before a plea or trial. Common grounds for dismissal include:

“Res Judicata” refers to an issue that has been already decided by the court in a previous case and hence, it cannot be heard again in a subsequent case.  The principle of Res Judicata is found on the increasing need for rendering finality to the judicial decisions. The court may dismiss the whole case out rightly, before the final hearing.

In the case of Satyadhyan Ghosal v. Smt. Deorajin Debi, where the principle of Res Judicata is invoked in the case of the different stages of proceedings in the same suit, some factors like the nature of the proceedings, the scope of the enquiry which the law provides for reaching a decision and also the specific provision made on matters related to such decisions are to be considered before the principle is held to be applicable.

Some suits have to be filed within a specified time limit after which the court may dismiss it at once without considering any merits or details of the case.

A court may outrightly dismiss the case, if, it does not have requisite jurisdiction, be it pecuniary or territorial.

An application under Rule 9 of Order IX for setting aside the dismissal for default of a suit was itself dismissed for default, in Doma Choudhary And Ors. vs Ram Naresh Lal And Ors.

Disposed as dismissed in limine

Disposed is a much wider term than dismissed

When an action is dismissed then the court is closing the matter without taking a decision on the merits, and commonly for a procedural reason. Whereas, a disposition means that the matter has been decided on the merits and judgment or order passed.

Application for Rejection of Plaint under Order VII Rule 11 of the Code of Civil Procedure can be filed at any stage and the Court has to dispose off the same before proceeding with the trial, the Apex Court has reiterated in  R.k. Roja v U.S. Rayudu and anrs.

Once a final order is passed by the court, the case is said to be disposed of in favour of either of the parties. Such a final order consists of more than one order. They are:-

Disposal of the suit at the first hearing (Order XV CPC)

A Court may also dispose of the suit in its very first hearing, on any one of the following grounds: –

Where a satisfactory disposition of the case has been worked out under section 265D, the Court shall dispose of the case in the manner mentioned.

‘Case Status – Disposed’ means the final order/judgment/decree has been passed by the hon’ble court. It does not mean that the case was quashed.

Please apply for the certified copy of the final order/ judgment/ decree to find out the effect of the Order without a  delay, as such matters are highly time-sensitive.