This article has been written by Ananya Agarwal, pursuing a Diploma in Intellectual Property, Media and Entertainment Laws from LawSikho.

On June 10, 2020, the Madras High Court settled a seven-year legal battle between two industry giants, ITC and Nestle in favour of the latter. In 2010, ITC launched Sunfeast Yippee! ‘Magic Masala’ and in 2013, Nestle released Maggi ‘Magical Masala’. ITC claimed that it was an integral part of its composite trademark ‘Sunfeast Yippee! Noodles Magic Masala’ and that Nestle was infringing this trademark by using the term ‘Magical Masala’. Therefore, issues that arise are twofold. Firstly, whether Nestle passed off ITC’s trademark? And secondly, whether common words used in an industry can be monopolized? This article seeks to examine these legal questions in the case of M/s ITC Limited vs. Nestle India Limited. 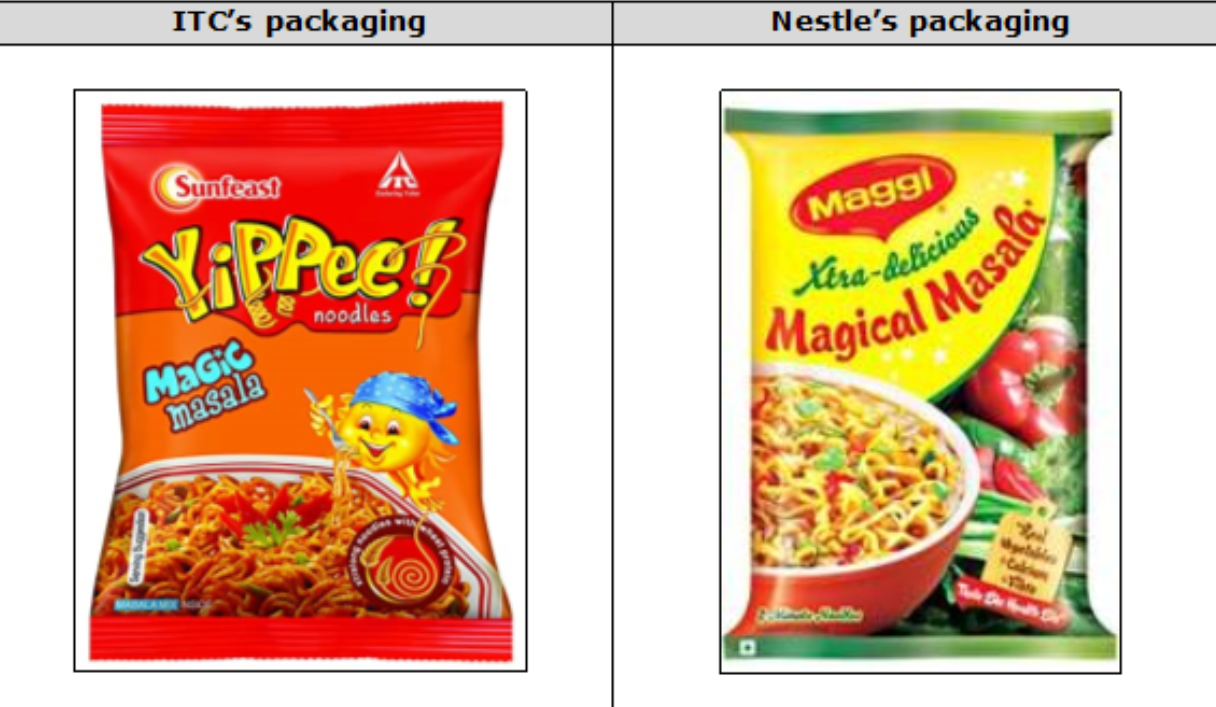 In today’s world, trademarks have been imprinted in people’s minds to such an extent that the product is the brand and not the other way around. Take for example products like Casio, Pampers, Band-Aid. Their trademarks have dominated their respective industries so much that the product is commonly referred to by the brand name. This shows the importance of a trademark to a brand or company. Therefore, oftentimes for the protection of their brands, companies officially register their trademarks. This registration provides legal ownership over the brand name, logo etc, which implies that the owner has exclusive rights to use, sell, modify the trademark. It protects the brand name from usage by others. Violation of a registered trademark can result in a suit for trademark infringement. Here, solely proving a deceptive similarity would suffice in a court of law. However, when the trademark is not registered, the owner still has a remedy of filing a suit for passing off of the trademark. Here, the plaintiff must not only prove a deceptive similarity but also the economic value and goodwill of its brand name.  Importantly, in the present case, ITC had not registered its trademark so it instituted a suit for passing off instead of infringement.

The essence of ITC’s contentions was that Nestle had, with malice, used the term ‘magical’ originating from ITC’s brand name ‘Magic’ in order to associate itself with ITC’s goodwill and deceive an ordinary consumer into buying its product. ITC went on to say that ‘Magic Masala’ was an important element in Sunfeast’s sub-brand name and not just a description of the flavour. Since Sunfeast had been publicly recognized and appreciated and had an economical value, its trademark although unregistered, still qualified as a valid trademark.

Whereas, Nestle contended that ITC cannot claim such a brand name as a valid trademark. It stated that a trademark cannot have been said to be violated if it was used as a description to indicate the ‘kind, quality, quantity, intended purpose, value, geographical origin, the time of production of goods or of rendering of services or other characteristics of goods or services.’  Since the expression ‘Magic Masala’ describes the taste of the noodles, it cannot be considered a sub-brand and therefore no proprietary claim can lie in the disputed expression. Further, since the term ‘Magic’ and ‘Masala’ separately and even together have been used repeatedly in the marketing of several other FMCG goods, the most common example being Lays’ Magic Masala chips, these terms have become common and laudatory in the industry.

Justice C. Saravan dismissed the petition and noted in favour of Nestle that ‘magic’ or ‘masala’ are common words in the Indian food industry, and no one can claim monopoly over the same. The court also observed that since these words are laudatory, no malicious intent can be gleaned from the defendant’s actions and considered Nestle’s usage of ‘magical masala’ as legitimate adoption.

The concept of laudatory expressions

This article as well as the judgement has frequently used the term ‘laudatory expression’, but what does it mean? ‘Laudatory’ in this context essentially means expressing praise. Since the word ‘magic’ has been used in an appreciative sense to describe the masala, the court has considered it to be laudatory. Since the term has been used as a flavour descriptor, it has no distinctiveness. Further, it falls within the grounds of refusal to register a trademark as provided under Section 9 of the Trademark Act, 1999. It states that if a mark is devoid of any distinguishing characteristic, defines a characteristic of the product only or represents customary language, it cannot be registered as a valid trademark. This raises questions on the validity of the trademark and a suit for passing off becomes doubtful. Further, it proves that common and laudatory words cannot be monopolized. The same was held in the case of Ram Rakhpal v. Amrit Dhara Pharmacy and Ors, where the court opined that those laudatory terms or common English words were not capable of being distinctive and cannot be monopolized by a single entity. An ordinary laudatory epithet must be open to all to use.

The concept of passing off

Passing off is essentially when a person sells a product by misrepresenting it to be someone else’s. It results in a company piggybacking on the goodwill of another company. The underlying principle is encapsulated in Perry v. Truefitt is that no man should sell a good under the pretence it is of another man.  Further, in S. Syed Mohideen v. P. Sulochana Bai, the court held that passing off is a wide remedy maintainable for diverse reasons other than that of registered rights. In a suit for passing off the petitioner must remember that proving goodwill means establishing that the general public associates the mark with the product. In the case of Micolube India Ltd. v. Maggon Auto Centre the court held that in a suit for passing off, it must be proven by the petitioner that the consumer was deceived and misled into buying the contended product and that this product is associated with the products of the first user of the mark.

Notably, a trademark can be registered only if the mark has acquired a secondary meaning i.e., it has some sort of distinctiveness in its connection to the product being sold. In the present matter, the court informed the petitioners that ‘magic masala’ could have become its distinctive mark only if the company enjoyed uninterrupted usage of the term for a long period of time. In the case of Toyota Jidosha Kabushiki Kaisha v. M/S Prius Auto Industries Limited, it was held that a suit for passing off depends on proving the prior user having goodwill.

In the present matter, however, ‘Magic Masala’ is not considered to be a valid trademark since it neither has distinctiveness or recognition on its own nor is it a sub-brand. It is merely used to differentiate flavours. In its annual reports, ITC projected its brand as “Sunfeast Yippee!” for noodles. Thus, the expression “Magic Masala” was not conceived as a brand or sub-brand. Even though ‘Magic Masala’ and ‘Magical Masala’ are phonetically similar, neither can be monopolised. Further, referring to Figure 1, one can see that the packaging shows no visual similarity in the two. It can safely be said then that Nestle cannot be held liable for passing off.

This long-drawn case gave a clear-cut rule of thumb for brands to follow: Do not use laudatory terms while branding. In my opinion, the Madras High Court did justice in the interpretation of relevant provisions and pronounced a judgement true to the letter of the law. A landmark judgement in its own right, this case put emphasis on the distinctiveness of a mark. For ITC to win this case, it would have to establish uninterrupted usage of the phrase for a long time coupled with the development of a second meaning of the phrase. Since ITC was able to do neither, it makes sense that the court favoured Nestle’s contentions. The only fallacy I see in this otherwise precise judgement is the discussion surrounding the registration of the trademark. Since the suit was essential regarding passing off, a debate into the registration into the trademark does not seem necessary.