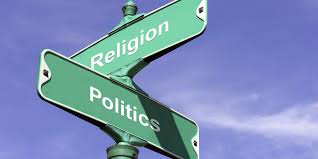 Religion and politics being antithetical to each other, religion shouldn’t be an overwhelming factor influencing politics in the country. This was realized even after partition when a large number of Indians opined that religion shouldn’t be mixed with politics as it disrupts harmonious co-existence and that the only way to live peacefully is to be secular. Leaders like Mahatma Gandhi and Jawaharlal Nehru also championed this.

Increase in extremism and communalism of politics incites the sectarian and schismatic forces in the society and thereby becomes a forcing house for failure in the democratic values and leads to national disintegration.

Religion should be practiced privately and shouldn’t be used by politicians in their election campaigns in a way which fans the flames of division. Mixing the two defeats the democratic values. Giving more power and control to the religious forces would lead to fragmentation of the nation and sovereignty of the nation would come into question. Once there’s fragmentation and disintegration, it’ll be difficult to keep the people following myriad religions in our country together. Further, if the political party wins the election after making an appeal to the electorate to vote on the ground of religion then it might so happen that the promises made by the politicians during campaigning might not be fulfilled after they get elected. In S. R. Bommai v. Union of India[2], it was held that religion and politics should be kept separate and it was observed that “if the Constitution requires the State to be secular in thought and action, the same requirement attaches to political parties as well. The Constitution does not recognize, it does not permit, mixing religion and State power. Both must be kept apart. That is the constitutional injunction. None can say otherwise so long as this Constitution governs this country. Introducing religion into politics is to introduce an impermissible element into body politic and an imbalance in our constitutional system. If a political party espousing a particular religion comes to power, that religion tends to become, in practice, the official religion. All other religions come to acquire a secondary status, at any rate, a less favourable position. This would be plainly antithetical to Articles 14 to 16, 25 and the entire constitutional scheme adumbrated hereinabove. Under our Constitution, no party or organisation can simultaneously be a political and a religious party”

Recently, the same trend was observed in the election campaigns of different political parties in the state of Uttar Pradesh. Vexed with this unhealthy practice, the Election Commission issued a letter asking the politicians to stop using inflammatory statements to appeal to the electors to vote on the basis of religion. Such an appeal which is made on the ground of religion, caste, creed, community and language is against the provisions of the Representation of the People Act, 1951, IPC and Model Code of Conduct. These appeals, which erode the secular nature of the constitution, are made by politicians without regard to the fact that the same would lead to bad blood, hostility and animosity between the members of the society and hamper the law and order situation which is extremely important to conduct elections freely, impartially and peacefully. Political parties have been issued notices time and again to desist from such actions but the same have been ignored and they continue to act in a manner which enables them to solicit maximum number of votes without any regard to the impact such inflammatory words would have on the general public.

The holding in Abhiram Singh v. C. D. Commachen[3] has triggered broader questions in terms of determining the liability of registered political parties whose names include religious words or words attributable to a particular caste. The case in point being parties like BSP and AIMIM which need not make a categorical appeal or canvass along communal lines considering their discerning caste affiliation. It is a well established law that once the Election commission finds a candidate guilty of a corrupt practice then it can file an FIR and issue notice under the Model Code of Conduct. The election petition is then dealt with judicially. Therefore a suggestion could be that of giving the Election Commission powers to take immediate action against the violators of Section 123(3) even amounting to disqualification of the candidate from the election.