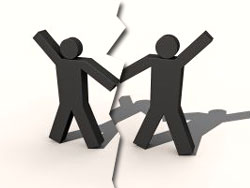 In this article, Debolina Mitra pursuing Diploma in Entrepreneurship Administration and Business Laws from NUJS, Kolkata, discusses ways of dissolving a partnership.

How to Dissolve a Partnership

However, dissolution of partnership firm is triggered when some predefined conditions as per the Partnership Act of 1932 are met such as:

This is triggered on account of the death of a partner, retirement or in case where the partner fails to pay the debt. Section 42 of the Indian Partnership Act 1932 provides for the dissolution of partnership due to certain contingencies and death of a partner is one of them.

Dissolution of the firm and its effects and consequences are dealt or legislated in various sections starting from section 39 to 55 incorporated in the chapter VI and partly section 72 incorporated in chapter VIII. There are five types of dissolution under the act as stated above.

We find this form of dissolution in section 40 of the Partnership Act of 1932. A partnership can be dissolved at any point of time with the consent of the existing partners irrespective of the fact of whether the partnership was formed at will or for a fixed period of time in accordance with the terms and conditions of the partnership deed or of a separate agreement. As we know that partnership is formed by mutual consent and volition of individuals who are called partners. This type of partition takes into account of the above fact and honours the decision of the partners. It also provides for a disjunctive clause that partnership can be dissolved by complying with the contract that was made between the partners. The second part speaks of a situation that if there was a written contract which provided for the manner and mode of dissolution then by following or adopting the same it can be dissolved. For example if the contract provides that consent of one partner has to be made in writing only then it must be adhered.

This is a form which does not leave any room for the partners to decide or resolve. It is like auto dissolution. Section 41 of the act speaks of two situations numbered as 41(A) and 41(B) where this form is applicable. The first situation is when all partners or even one partner is adjudged as insolvent. The second situation is section 41(B) wherein it speaks that in event of the business of the firm becoming unlawful or it would be unlawful for the partners to carry on the business. For example in case of the business of prize chit funds.

However, an exception has been carved out which says that if out of many projects or ventures if one becomes illegal and the other business can be carried out then the firm will not stand automatically dissolved.

Dissolution Due to Certain Contingencies (section 42)

It says that if on the happening of four contingencies numbered as a, b, c and d and qualified by the term of the contract the firm shall stand dissolved. They are as follows:

On the expiry of the term.

For example if a partnership was formed to sell a particular item for one year. On the completion of the one year the firm would be dissolved.

On completion of the undertakings.

For example a firm was formed to provide service to VAT registration. Since the law has been amended and VAT no longer exists therefore the firm shall stand dissolved.

On the death of a partner.

Adjudication of partner as insolvent.

In the case the partner is adjudged as insolvent the firm would be dissolved even though the term has not been expired for the particular venture has not been finished.

Section 43 of the act provides an opportunity to avail this section to dissolve the firm provided it is formed at will. The law also says that such option to be exercised only in writing and such notice to be given to all other partners or partner. Therefore to come within this provision of law the partnership must be formed at will. Now according to section 7 of the act if there is no mention of a fixed duration or determination the partnership constituted is considered to be formed at will. Thus in such cases a partner by notice in writing intimating the other partners or partner can dissolve the firm.

This provision states seven grounds on which the court can dissolve a firm. Section 44 applies only when one of the partners approaches a court of competent jurisdiction praying for dissolution. The seven grounds are as follows:

Liabilities for acts of partners done after the dissolution

Any act done by the partners to the third party would hold liability as would have done had the partnership being not dissolved unless public notice is published. However the estate of a partner who dies, or adjudged as insolvent or who retires would not be held liable for the acts done after the date on which he ceases to be a partner.

Mode of settlements of accounts

While settling the accounts of the firm after the dissolution the following rules must be adhered to:

According to section 16 of the Partnership Act 1932 the provisions of section 16 may be applied to transaction by any partner or the representatives of the deceased partner after the firm is dissolved after the death of a partner before the affairs of the firm has been completely wound up.

Return of premium on premature dissolution

If a partner has entered a partnership by paying premium for a fixed term he would be entitled to receive the payment of the premium if the firm dissolves before the completion of the fixed term unless due to death of a partner. However this clause will not be applicable if the firm is dissolved due to his own misconduct or the partner had entered into an agreement stating that no premium would be paid to him on dissolution.

Dissolution of a partnership firm requires plenty of paperwork and must be conducted in accordance to the procedure mentioned in the Partnership Act of 1932.