This article is written by Kashish Sethi, pursuing a Diploma in Intellectual Property, Media and Entertainment Laws from LawSikho.com.

In 2020 when the world was engaged in a continuous grapple with COVID-19, many business entrepreneurs took to this situation as an opportunity to build their career, mostly via the internet as it is the fastest mode of spreading information and having a name in the market. Moreover, have you ever come across the ad for GoDaddy where M.S. Dhoni endorses Go Daddy by stating “to grow your business grow your business through GoDaddy.” Operating a business virtually is similar to operating it physically in the market, though both have different means of carrying it out but face similar challenges in their day-to-day business. It is very easy to copy up with someone’s work to avail unfruitful benefit but can it be done in the virtual world as well? Can someone take away your online traffic/outreach by using a similar domain name and is it covered under the Trademarks Act 1999?

What is a Trademark?

In layman’s terms, the term Trademark is described as any mark which is used in terms of trade and used to distinguish your product from the competitor’s product. The mark can be a word, symbol, configuration, device, or any combination which the trade owner can adopt and use to Identify and distinguish it from the competitor’s product. As per Section 2(1)(Zb) of TradeMark Act,1999 a  “trademark” means:-

Any mark which is used in relation to/for indication of goods or service which is capable of being represented graphically and able to distinguish the goods or service of one person from those of others and may include the shape of goods, their packaging and combination of colours which are permissible in the Act.

In Cadbury India Limited And Ors. vs Neeraj Food Products, the court laid down the purpose of “trademark” that Trademark is a mark used to protect traders and the consumers against malafide use/adoption of another’s well-known trademark to deceive the general public to avail unfruitful benefits in the market.

What are domain names?

As a layman’s term, domain names are user-friendly names that are easily identifiable, remembered and help to distinguish one website/web address from another’s website/web address. Since they are easily remembered, they are being used as business identifiers and are being used to attract potential customers to their websites. For example Lawsikho.com

In the case of Bombay High Court in People Interactive (India) Pvt. Ltd. vs. Vivek Pahwa & Ors, the court gave a proper definition of the term “domain name” that a “domain name” is the territorial address of a business on the internet where, it directs a user to a particular part of the web where the particular domain name of the registrant stores and display all the necessary information, offers and service available on the internet.

Domain name as a Trademark

Any person reaching to the world wide web with an intention to expand their business as it is noticeable by the public at large as the domain name serves dual functions.

In the case of Celador Productions Ltd. Gaurav Mehrotra, the defendant used a name on its website i.e crorepatrikaun.com or KAUN BANEGA CROREPATI as a second-level domain which was similar to that of the plaintiff’s game show name i.e KAUN BANEYGA CROREPATI. Apart from copying the format of the show, the defendant used a similar logo, similar font, and the plaintiff’s representative voice. In this case, where everything was similar to someone’s original product, the court held that “a domain name is more than a web address, it provides information about the owner’s goods and service, therefore the owner can seek the protection of its domain.”

Courts have also highlighted the importance of a domain name as equal to a Trademark for the company on the internet as a domain name must be unique to its business and have maintained an exclusive identity. Where in Rajat Agarwal vs. Spartan Online, the court held that a domain name should not be used as an instrument of commercial enterprise as it facilitates the ability of the consumer to navigate the internet to find websites which are looking for, but also should be used to identify and distinguish the business itself, or its goods or services, and to specify its corresponding internet location.

Applicability of Trademark Law to a domain name

As per, Section 9 of the Trade Marks Act, 1999 which states any mark which qualifies under one or more of the following absolute grounds is not registrable under the Act. :-

In one of the famous booking websites cases (Bigtree Entertainment vs. Brain Seed Sportainment) where the plaintiff had registered a Trademark for its mark BOOKMYSHOW under 41 & 42 and the defendant has a domain name under  www.bookmysports.com. Here, the court held that the term “BOOK MY” was descriptive but not distinctive. That conjoining of two English words “BOOK MY” is not an innovative word, which is distinctive but a description of the business or a type of business that is being run.

As per Section 11 of Trade Marks Act, 1999 which states that ay one or two grounds mentioned in the section can refuse your mark to be registered if:-

Is it a similarity or the creation of confusion?

Section 2(1)(h) of the Trade Marks Act, 1999 defines the term ‘deceptive similarity.’ In Maruti Udyog & Suzuki Motors Corporation vs. World Information Pages, “Marutisuzuki.com” was a similar domain name that was being used by the defendant and was creating confusion amongst the consumer with the plaintiff’s Trademark. It was held that as per the WIPO, arbitration, the respondent does not have any legitimate interest in the domain and it was being used under Clause 4(b)(iv) of the UDRP and the defendant should transfer all the IP related to the domain name to the plaintiff.

Since domain names are the extended version of a Trademark concept, they are bound to similar contraventions, malpractices like Trademarks have. i.e law of passing-off and infringement of domain names.

The act of passing-off

The act of passing-off is a civil wrong that is derived from common law in which a person is engaged in a common field of activities and business to take over its goods and services. The act will create a deceptive similarity with the goods and will create confusion amongst the consumers and traders in trade which would create a huge loss to the original proprietor’s business.

Though, there is no statutory definition about passing off but Section 27(1) of the Trade Marks Act, 1999 talks about passing off. In Singer Manufacturing Co. vs. Loog, the court explained that no person is entitled to deceive someone by falsely representing his goods as the goods of another person; and no one is allowed to use any mark, sign, or symbol which would create a false representation of someone else’s goods or services.

Domain names also face the same issues a Trademark and Trademark law applies to internet activities as well. In one of the famous search engine cases i.e In the Yahoo Inc. Akash Arora Case, where the court accepted that the law of passing off can also be liable to the domain name as there was a similarity between the marks which is an important aspect in the action of passing off as there is a high possibility of likelihood of confusion and deception being caused.

In Satyam Infoway Ltd. Vs. Sifynet Solutions (P) Ltd., the court laid out a three-element in which action of passing off against a domain name can be taken.

Court also observed that if the domain name has all the characteristics of a Trademark and could find an action for passing off.

Infringement occurs when someone with an unfair intention uses a deceptively similar Trademark and creates confusion amongst the consumers which will eventually harm the reputation of the proprietor and cause loss of profit as well. As per Section 29 of the Trade Mark, 1999 following acts constitute infringement – 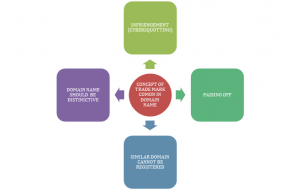 The concept of a domain name is an extended version of Trademark and has all the similar things of being seen as a Trademark. The case of Arun Jaitley, V. Network Solutions Private Ltd., laid out a few important points regarding domain names as Trademark by the following points –

Since domain names act as a reputation for brands in a virtual world, there is a high chance of it being misrepresented by someone else to harm the reputation. Therefore, it should be seen as a Trademark and should be protected as a Trademark.