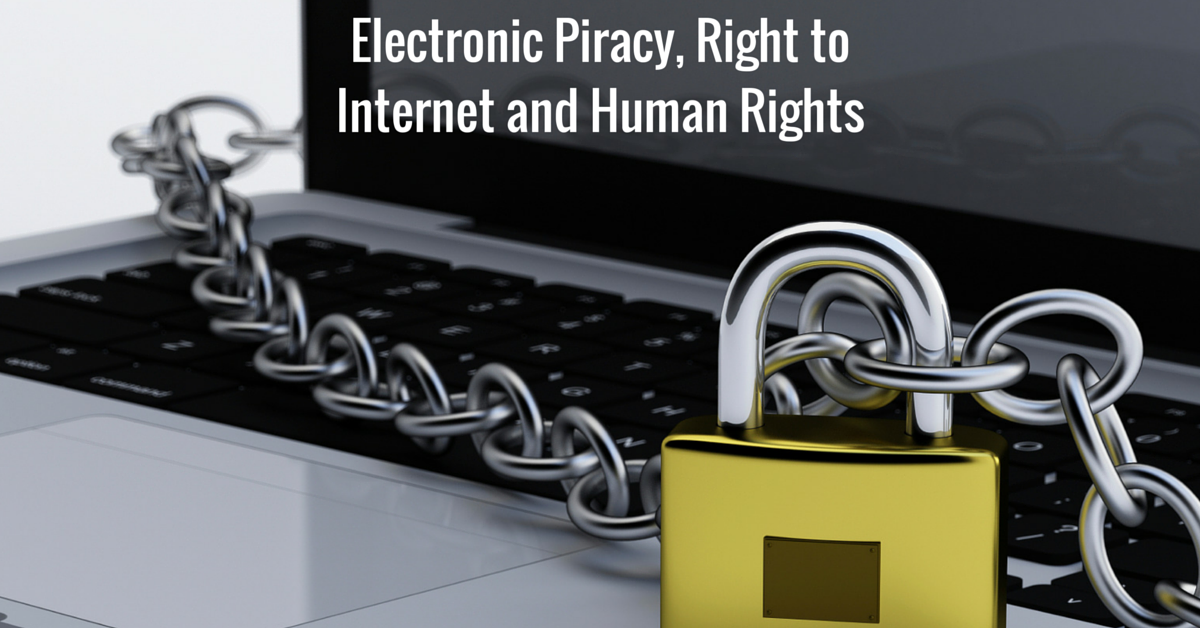 Is combating piracy by disconnecting individuals from Internet a violation of Human Rights? This is being republished from A First Taste of Law. The internet is a medium of communication, and the very method of communication is basic to all humankind. That is the view of Frank La Rue, UN’s Special Rapporteur on the publicizing and demonstration of Right to Express and Opinion. In this guest post, Donnie Ashok, who manages technological issues for iPleaders, writes about the right to internet and La Rue’s report.

La Rue was tasked to write a report on the Internet as a global medium of communication and expression.

On completion of his task he substantiated that removal of one’s access to the internet should come at complete rarity and “few, exceptional and limited circumstances prescribed by human rights law” and that an infringing person’s right to the internet is covered under the basic human right of expression.

“I don’t say that internet access is a new right,” he told Click from the BBC World Service. The right is about expression, the right to enlighten oneself with human knowledge, with different streams of the idea, opinions, imaginations, etc.

Freedom to access internet as means of education, communication, research, networking- the tool which reformed the politics of middle-east very recently.

“Which means no censorship, no blocking [or] filtering unless in the very qualified and very detailed exceptions – for the protection of children, of national security and others that are legitimate but in a very exceptional way.”

Criminal laws (eg. defamation) should not be used to stifle opposition opinions during elections etc, in democratic issues.
Also, La Rue commented upon policies which bar people from getting onto the internet at all. “You cannot talk about the right to freedom of expression or to access information over the internet unless there is a specific policy by all states to guarantee everyone in their territory some form of access,” he said.

Many a times the geographical difference has been exemplified by varied attempts on cracking down on illegal downloads and peer to peer file-sharing, warez sites, etc. La Rue’s proposals are in conflict with those formulated previously by many others.

UK’s Digital Economy Act which heavily protects copyrighted material and provides to take “technical measures” and restricts and even removes internet access from those deemed to be breaking copyright laws has been singled out and brought to limelight in this report.

La Rue condemned such enactments and wrote in the report that he was “deeply concerned by discussions regarding a centralized ‘on/off’ control over Internet traffic”.

Nicolas Sarkozy laid out his internet agenda at the e-G8 forum in May.

HADOPI Law – an acronym of the department in France which enforces it – includes a highly controversial “three strikes” rule.

This rule put in and pushed firmly by Nicolas Sarkozy despite strong opposition and public criticism, enforces a new government agency to contact illegal file-sharers, spammers, peer-to-peer site “users”, online pirates, all sites which links to stolen or cracked software, etc, and mail them written warnings, if the subject ignores the writings for up to three times, he’d get booked, and would be brought before a judge.

Punishment would range from fines to imprisonment and the worst could be a complete suspension of all their online accounts, including social networks, emails, servers, etc, for about 5 years.

Recently, amidst the news of ‘Arab Spring’, Sarkozy has also made further attempts to lead the world in formulating the new-gen internet rules at the e-G8 forum.

Part of his opening speech was like a warning “the internet is not a parallel universe where legal and moral rules and more generally all the basic rules that govern society in democratic countries do not apply”.

Google chairman Eric Schmidt stated that “technology will move faster than governments, so don’t legislate before you understand the consequences” later in the forum.

La Rue’s report that “cutting the internet as a means of punishment is stupidity” has been supported by Jim Killock of the Open Rights Group.

“Obviously that means that they can’t communicate with their elected representatives, their friends. “It means their jobs are disrupted. And that’s just a stupid way of punishing something which is essentially a minor financial misdemeanor.”

In the past, it has gone on record as describing a three strikes rule as “appropriate”.

However, most of the leaders present in the forum refused to comment on La Rue’s report, and would give no indicator over whether it’s a good road to tread on.

But here Killock understands La Rue’s underlying implications and could feel the need of immediate formal adoption as it has already been making a desired effect.
“You can’t say that just because somebody’s misbehaved you can take something as fundamental as communication away from them.”
“I think our idea is better than theirs, and it would take little or no effort to establish the ideal policies La Rue’s report contains,” he said.

“Yes, sometimes you take that right away, but it’s usually because you’ve murdered or swindled to such a degree that you’re a danger to the public. There are counter-balancing rights, including Right to Intellectual Property, and Government must set the balance in a fair and proportionate way” stated the Department for Culture, Media and Sport, they pointed out that by following such ideals another basic human right to property would get flouted if copyrights are man-handled by enthusiastic servers.

It was overall implied at the forum that “temporary suspensions” should not happen for some time soon.

“This is not part of our current plans and could not be introduced until at least a year after the initial obligations are in place, and only then on the basis of clear evidence of need and appropriateness and after close consideration by Parliament.”

The suggestions in Mr La Rue’s report do not require any action on the part of government – or indeed even the UN.

Yet as the internet as deemed universal right in the Swiss it can arguably shift from being a luxury into a right, governments are facing the difficult task to balance both the copyright holders and the webmasters with their unique rights.

Or, as Mr Schmidt made clear, governments may just have to accept that they might never be able to keep up with technology.