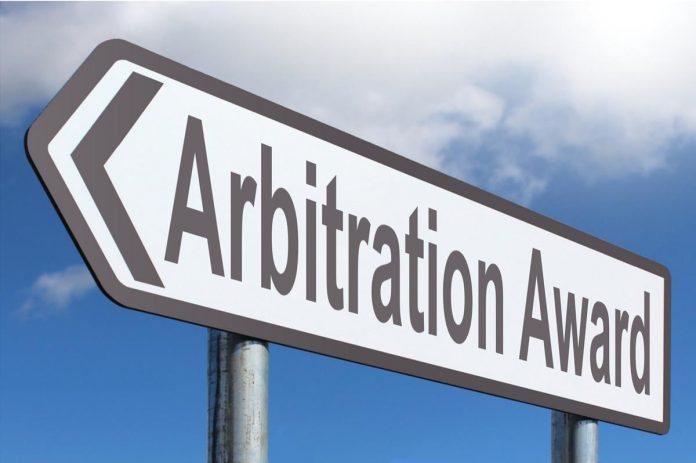 In India, a foreign judgment may be implemented either through execution proceedings or through a suit. An arbitral award is an arbitration tribunal’s decision on the merits of an arbitration tribunal and is equivalent to a court judgment. Arbitration is particularly popular in the commercial sphere as a means of resolving disputes. One of the reasons for this is that it is often easier to enforce an arbitration award in a foreign country in international trade than to enforce a court judgment. The implementation of international arbitration awards in India is regulated by the Arbitration and Conciliation Act, 1996 through the New York Convention and the Geneva Convention, and a non-conventional award in India will be enforceable on the grounds of justice, equality and good conscience under common law.

Arbitration is the most effective and dominant form or method as Alternative Dispute Resolution compared to conciliation, mediation, negotiations, etc[1]. Arbitration an Alternative Dispute Resolution is usually used in resolving disputes, particularly in International Commercial transactions conducted across national boundaries as well as in domestic transactions that are civil in nature. It can also be used in matters of employment or consumer disputes. Arbitration is somewhat same as mediation, but in mediation the decision given by the mediator cannot be imposed on parties to the dispute. ‘‘An arbitration is a reference of a dispute or difference between not less than two parties for determination after hearing both parties in a judicial manner, by a person or persons other than a court of competent jurisdiction.’’[2] “Where the parties to dispute refer the matter to a person and such person holds a judicial inquiry in deciding the dispute and comes to a judicial decision, such person is called an arbitrator.’’[3] “An award stands at the same footing as a decree of a court whether it has been passed into a decree or not and therefore it is binding upon the parties.’’[4]

‘In Arbitration proceedings disputes is settled by an impartial neutral who is a private person who is a third party to the dispute, whose decision the parties to disputes have agreed. Arbitration is not same as judicial proceedings as it is basically an out of court settlement process. Arbitration only deals with disputes which are civil in nature.[5] The person by whom the disputes are settled is known as arbitrator or arbiter and the decision given by him is known as arbitral award. The arbitral award is final and binding on the parties to the dispute and for the enforcement of such award the party has to move to the court[6]. Arbitration allows the parties to have a private dispute resolution procedure and avoid national courts.

An arbitral award can never be determined as a contract, it should be determined as a decision out of a contract. The consent of the parties is not necessarily to be present in a decision. An award decided has judicial binding effect on the parties. The arbitral award can be final as well as an interim award.[7] It may be a ‘domestic award’ or ‘foreign award’[8]. An award by the arbitrator must always be in writing and signed by the arbitrator.

Arbitration on basis of Jurisdiction

Evolution and Growth of Law of Arbitration in India

Arbitration in India has a long history. In ancient times, people frequently voluntarily submitted their disputes for a binding settlement to a council of a community’s wise men — called the panchayat. In India, the Panchayati raj system has found its place in different rules[18].

An arbitration award may be given for payment of a sum of money, judgment of any matter to be decided in the arbitration proceedings, injunctive relief, substantive fulfilment of a contract and rectification, setting aside or cancelling an act or other document.

An arbitral award can be categorised into:

Domestic awards are governed by Part I of the Arbitration and Conciliation Act, 1996. A domestic award is an award granted pursuant to Section 2 to 43 of the Act.[25]

Part II of the Arbitration and Conciliation Act of 1996 deals with International Arbitration or Foreign Arbitration.[27] Section 44 of the Act defines with Foreign Award.[28]

The regulation and execution of decrees in India is regulated by the Civil Procedure Code, 1908 (“CPC”), while the arbitral award procedure in India is governed mainly by the Arbitration & Conciliation Act, 1996 (“Act”) and the CPC.

For the same way as an Indian court decree, domestic and international awards are enforced. However, there is a difference depending on the seat of arbitration. Seated arbitral award (“domestic award”) would be governed by Part I of the Act, enforcement of foreign — seated awards (“international award”) would be governed by Part II of the Act.[30] 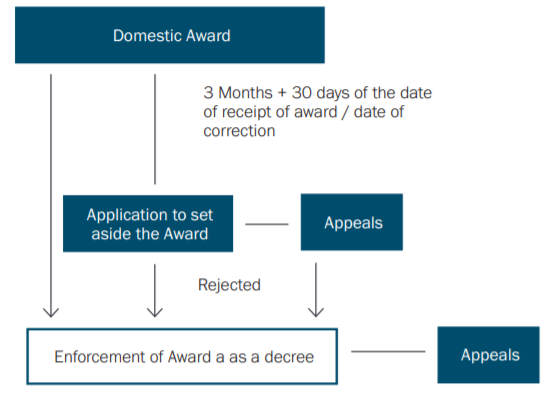 If a party receives a binding award from a state signing the New York Convention or the Geneva Convention and the award is made in a territory recognized by India as a convention country, the award would then be enforceable in India. In India, implementing a foreign award is a two-stage procedure begun by filing a request for execution. Initially, a judge will decide if the award met with the law’s criteria.

Once an award has been considered enforceable, it can be applied as a court order.

At this point, however, parties should be aware of the various obstacles that may occur, such as frivolous complaints from the opposing party, and provisions such as bringing the award’s original / authenticated copy and the underlying agreement before the court. 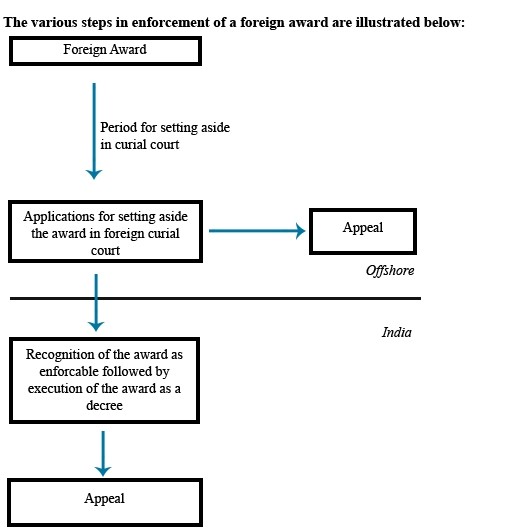 Conditions for enforcement of Arbitral Awards (domestic and foreign)

A party may use the following grounds to contest an award. If the other party shows this, such an award would be made unenforceable.

In the case of domestic arbitral awards, the 1963 limitation law applies to arbitrations because, according to section 21, the arbitral proceedings in respect of a specific dispute start on the date on which the respondent receives a petition to refer the dispute to arbitration.[31] Arbitral awards are deemed to be a decree.[32] The Arbitration Act does not place any restriction on the execution of a foreign award, and the usual limitation period (12 years) is likely to apply.[33]

Different high courts have given different definitions of the limitation period within which a party can impose an award in the case of foreign awards. The Bombay High Court observed a foreign award in ‘Noy Vallesina v Jindal Drugs Limited’ not to be a judgment, rendering it non-binding on parties unless it was reported as enforceable by a competent court.[34] In the ‘Compania Naviera ‘ Sodnoc ‘ v. Bharat Refineries Ltd.,’ on the other hand, the Madras High Court referred to international awards as considered decrees.[35]

In M/s. Fuerst Day Lawson Ltd v. Jindal Exports Ltd, the Supreme Court ruled that there could be different stages in a single proceeding. A court can agree on the enforceability of the award in the first proceeding. Once the enforceability has been determined, more successful steps can be taken to implement the same.[36]

In the case that a foreign award is implemented, the party cannot appeal against any court decision denying the award’s objections. If the court holds the award to be non-enforceable, an appeal can be made. Therefore, a ruling that upholds the award cannot be appealed twice. Nevertheless, according to Article 136[37] of the Indian Constitution, the party can look forward to a direct appeal to the Supreme Court of India. These forms of appeals are pursued only in the case that the court thinks there is a matter of fundamental importance or public interest.[38]

The party seeking enforcement of a decree of a court of reciprocating country to file a execution proceedings in India. International rulings from a reciprocating territory’s superior courts can be specifically applied by filing an execution petition under section 44A of the Civil Procedure Code. After which section 51 must come into play and order XXI of CPC.[39]

In the event that a non-reciprocating nation gives the foreign judgment, a fresh case will have to be brought before a court of competent jurisdiction in India, where the foreign judgment will be considered as proof. The time limit for filing a lawsuit to enforce these international judgments is three years from the date of delivery of the judgment.[40]

Challenges in Execution of Foreign Arbitral Award in India

Local government pressure, especially local parties with more political power, may attempt to cancel the award or the full impact of the award, which could frustrate the award given by the international arbitration seat.

Part II of the 1996 Indian Arbitration & Conciliation Act (“the Act”) deals with the enforcement of foreign awards, while Chapter I (Sections 44-52) deals explicitly with the awards relating to the Convention. According to Section 44(b), a “international award” must be given in one of those territories as the Government of India may, upon being satisfied with the existence of reciprocal provisions, by notification in its Official Gazette, declare it to be the territory in which the Convention is applicable. There is, however, a reason why it is necessary to remove this provision to obtain gazetted notice in order to bring India’s arbitration system into accordance with convention norms. Gazetting provisions create unnecessary confusion about the compliance of international awards given in countries that are contracting states to the Convention but have not yet been informed in the Gazette.

India is not a country that has anti-arbitration prejudice. It is therefore easy to argue that India’s legal system seeks to create a facilitative atmosphere for applying international awards. A major issue with the 1996 Arbitration and Conciliation Act is compliance, it handles foreign arbitral awards and foreign court rulings in a similarly. Due to the lack of distinction between foreign arbitral awards and court decisions, the Indian Law does not explicitly address issues directly related to foreign awards. Some changes, such as trying to clarify convention countries with reciprocal provisions that are yet to be specified in the official gazette, and legislation dealing directly with international arbitral awards would allow the arbitral system to be more organized and India to be compatible with advanced legal regimes around the world.

[1] What is Arbitration? Available at https://www.mediate.com/articles/grant.cfm last visited on 9th September,2019.

[9] What is Arbitration? available at https://www.wipo.int/amc/en/arbitration/what-is-arb.html last visited on 9th September,2019.

[13] What is domestic Arbitration, available at https://www.ciarb.org/training/pathway-courses/domestic-arbitration/ last visited on 9th September,2019.

[14] What is International Arbitration, available at https://www.thebalancesmb.com/what-is-international-arbitration-4160392 last visited on 9th September,2019.

[17] Free Advice Staff, what is and arbitration agreement, available at https://law.freeadvice.com/litigation/arbitration/agreement_arbitration.htm last visited on 9th September,2019.

[37] The Constitution of India, 1950 available at https://www.india.gov.in/sites/upload_files/npi/files/coi_part_full.pdf last visited on 11th November,2019.