This article is written by Adarsh Vasudeva, pursuing Certificate Course in Advanced Civil Litigation: Practice, Procedure and Drafting from LawSikho, and Ayesha Khan.

The Epidemic Diseases Act, 1897, has been enforced across the country several times, to deal with the outbreaks of diseases like swine flu, dengue, cholera, etc. Special provisions to implement containment measures that are required to control the spread of a disease are provided in the Act. It aims to prevent dangerous epidemic diseases from spreading in the country.

The Epidemic Diseases Act was first used to restrain the spread of the bubonic plague in Mumbai, then known as Bombay Presidency of the British India. Governor-General Victor Bruce granted the local authorities special powers enabling them to implement necessary measures to control the epidemic.

The law was thoroughly enforced to limit and control the plague epidemic at the time of its enactment, it conferred powers to search suspected plague cases in houses and among travellers. Affected people were segregated forcibly, infected areas were evacuated, disinfected and demolished.

Crowds, public meetings, assemblies were banned along with gatherings at festivals and pilgrimages were also suspended. There were allegations during this time, of violence, humiliation and misbehaviour against women because of the law which eventually led to out breaking of riots. To implement the law, the military was also used in several places by the government. Now, Covid-19 has left the country in desolation, as it has limited lifestyles and not just only transactions

This law is still relevant even after independence, since 1947 it has been used several times successfully for tackling epidemics by the Indian Government, restraining the outbreak of diseases.

Main provisions of the Act

Let’s take a turn into the fictional world and try to understand the provisions of this act through the characteristics of 3 musketeers. 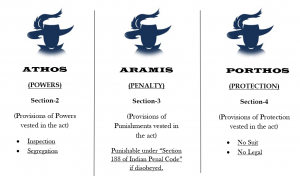 Section 2 of this act allows states to take steps to discourage the transmission of any infectious illness that is outside the control of ordinary law by providing official notifications outlining interim laws that must be followed by the public. It specifies that if the State Government believes that such Acts are inadequate for the stated intent, it can issue a public notice prescribing temporary legislation for the public/class of persons to follow.

Disobedience to a public servant’s order is punishable by easy incarceration for up to a month and/or a fine of up to Rs. 200 if it “causes or threatens to cause interference, annoyance, or injury, or the possibility of obstruction, annoyance, or injury.” If the disobedience “causes or threatens to cause danger to human life, health, or safety, or causes or tends to cause a riot or affray,” it is punishable by up to six months in jail and/or a fine of up to Rs. 1,000. Violation of the Act’s provisions enacted in response to the Covid-19 epidemic, for example, would result in the latter penalty because it would endanger human life, fitness, and welfare.

Limitations of the Act

More power to this warrior through the Epidemic Diseases (Amendment) Bill, 2020

On 14 September 2020, the Epidemic Diseases (Amendment) Project for 2020 was introduced in Rajya Sabha. It amends the 1897 law on epidemic diseases. The law ensures that deadly epidemic illnesses are prevented. The act amends the act to cover healthcare workers protected from infectious diseases and extends the authority to deter the transmission of these diseases through the central government. The bill abrogates the ordinance (amendment) issued on 22 April 2020 for epidemic diseases. The main purpose of this act is to shield health care workers, their residential premises, and workplaces from abuse during a pandemic.

Main features of the bill

The case concerned some directives given by the Muzaffarpur District Magistrate for the enforcement of the “anti-Kalazar” system.  It’s also worth remembering that, under Section 188 of the IPC, there’s no need for an intention to kill, because not knowing the warrant is enough to make you responsible for the offence. Courts will not take cognizance of an offence under Section 188 of the IPC merely because an FIR has been lodged. Section 195 of the Code of Criminal Procedure, 1973 (“CrPC”) demands that the related police in charge shall file a case. The prosecutions may be quashed if the terms of Section 195 of the CrPC are not followed.

In this case, a significant question came in front of the judiciary body of Orissa High Court, the query was that if a doctor fails to have himself vaccinated against cholera as demanded by the State Government’s regulations, then he would be liable under Section 3 of the act or not. The court came to the conclusion that as the intention of the doctor was irrelevant to the case, he would be liable under the section of the said act.

In Ram Lall Mistry v. R. T. Greer, during the discussion on the scope of Section 4 of this act, the Calcutta High Court in 1904, came to the conclusion that an omission to pay compensation as required by the act’s regulations would not be covered under Section 4.

COVID-19 elicited a mixed response from India. The solution includes a variety of statutes, regulations, programs, governing agencies, and national and state-level advisories. As demands for government intervention rise, the Epidemic Diseases Act has become a point of contention. The Infectious Diseases Act’s limited intent is for states to take special precautions for serious epidemic diseases, rather than creating a public policy framework. The statute grants the government broad powers to take coercive measures against citizens under this narrow context.

To win the war against coronavirus, we as citizens should serve this warrior (follow the provisions) and not disobey him, as we cannot afford to face the wrath of this disease.

Students of  Lawsikho courses regularly produce writing assignments and work on practical exercises as a part of their coursework and develop themselves in real-life practical skills.