This article has been written by Vaibhav Sachde, pursuing Legal Writing For Blogging, Paid Internships, Knowledge Management, Research and Editing Jobs from LawSikho.

In the current liberal period, a country like India, that has a history of adhering to ‘untouchability, caste system and Varna system in society has always needed a mechanism to combat these practices. Thus, India’s centuries-old discriminatory system is directly responsible for the establishment of the country’s reservation system. In essence, the reservation system is an example of positive discrimination designed to benefit disadvantaged groups. It aims to ease access to government employment, educational institutions, and even legislatures for certain segments of the population that have historically been the victims of discrimination based on their caste identification. This strategy was implemented based on equity, i.e. to provide afflicted castes with equal opportunities and position in society, to socially elevate them, to put them on par with other sectors of society, and for the development of the lowest strata of society.

The concept of caste-based reservation idea was brought in by William Hunter and Jyotirao Phule in 1882 and its implementation can be seen under Minto-Morley reform 1909, Government of India Act 1919 and some other British reforms, but the reservation system used presently, in its true sense, was introduced in 1933 when the ‘Communal Award’ was presented by British prime minister Ramsay Macdonald and further similar basis in “Poona Pact”. This policy did not apply to all affected castes since, following independence, reservations were initially available exclusively to people under SC and ST. The revolutionary reservation policy came into effect in 1991, after the Mandal Commission’s recommendations. This included OBC as well and was viewed as a big step toward the upliftment of all disadvantaged castes.

In this article, we will look at the provisions under the Indian constitution for reservation policy and further will analyse the significance of the Mandal Commission Report in its implementation.

To comprehend the requirement for reservation policy, we will first examine the situations in which it was established and then examine why it remains necessary decades later. Firstly, we observe in history that the Hindu society was divided into Jatis, or classes, which included the Brahmans, Kshatriyas, Vaisyas, and Shudras in ascending order of their social hierarchy with all the privileges also offered in this order. There existed another class of individuals, referred to as “untouchables” which meant “without class.” These untouchables were deemed unfit for society and hence were excluded from it. Theirlife was no less than a slave’s. The epics such as the Mahabharata also mention several occasions where a warrior named Karna was denied the opportunity to demonstrate his abilities only because he was a Shudra and was also called to as a ‘Shudra Putra’ to humiliate him. The once existent caste structure had a significant role in the establishment and growth of India’s Reservation Policy.

Secondly, when we consider its relevance in the modern day, we find that even in the twenty-first century, discriminatory practises against reserved castes have not been entirely eliminated. As seen in rural villages across India, a ‘Dalit’ is still not permitted to enter communal temples. He is nevertheless regarded ‘DIFFERENTLY’ by the ostensible upper-class. Additionally, there is evidence that they struggle to maintain a minimal standard of living. In 2014, an ActionAid-funded sample study of Dalits in Madhya Pradesh discovered that 65 percent of Dalit settlements were not visited by health field workers. Dalits were denied access to ration shops in 47% of cases, and were given less grain than non-Dalits in 64% of cases. In 2015, 49% of Dalit children under the age of five were underweight and malnourished in Haryana, while 80% of those between 6–59 months were anaemic.

Furthermore, there is large data showing the inhumane atrocities faced by them till date.  Additionally, when viewed through the lens of the legal profession, the appointment of a Dalit judge to the Supreme Court after nearly a decade and his critical absence from the five-judge bench deciding on reservation speaks volumes about the misery of those living in penury and the representative character of public institutions. This indicates that although the nation continues to develop, the general mentality remains unchanged.

After establishing the necessity and concept of reservation policy, we will examine a critical stage in the formation of the Indian reservation policy i.e the implementation of the Mandal commission’s recommendations. Previously, in India, the reservation was limited to SC and ST citizens. This did not accomplish the objective of truly uplifting all disadvantaged people as a result of past brutality. It was an inherently exclusive policy, necessitating the inclusion of caste, economic, and social indicators to ensure a just reservation policy. So, firstly looking at the events under the Mandal Commission Report the following timeline can be established- 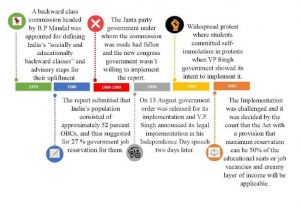 After recognising the need for reforming the reservation policy in 1979, the Janta administration led by Moraji Desai formed a committee to provide suggestions on how to deal with people from socially and educationally backward classes. As a result, a commission presided by BP Mandal was formed (also famously known as the Mandal commission). After conducting extensive research, the commission concluded that OBCs (“Other backward classes”) identified based on caste, economic, and social indicators constituted 52% of India’s population, hence the commission recommended that members of Other Backward Classes (OBC) be granted reservations to 27% of jobs in the Central government and public sector. However, by the time the commission findings were out, the Janta administration had collapsed and the newly elected Congress government of Indira Gandhi and Rajiv Gandhi was unwilling to act on the report owing to its politically controversial character, and it languished for a decade.

Finally, on 7 August 1990, the National Front administration headed by V.P. Singh announced that it would offer 27% reservations for “socially and educationally backward groups” in central services and public enterprises, based on the Mandal Commission Report and issued the Government Order on 13 August. Additionally, on Independence Day address two days later, V.P. Singh declared its legal execution. This sewed widespread unrest across the nation. When the student community went to the streets to protest, the situation became so violent that they began self-immolating in protest of the government’s actions. This became a symbol of opposition to the policy. As a result, an anticipated lawsuit was filed by Indra Sawhney in the Supreme Court of India challenging the constitutional validity of the Government Order implementing the reservation policy of Mandal Report recommendations. The court determined that the court may reserve up to 50% of educational seats or employment openings and that the creamy layer of income would apply. But this policy implemented was not a whole inclusion of the recommendations; rather it was partly implemented because the Commission’s recommendation’s second part focused on the reservation of seats in central educational institutions for OBCs. This was not available to OBCs until 2006. Thus, the whole Mandal commission report came into effect after dramatic events that necessitated reforms in 2006 and are an integral part of Indian politics today.

A glance of Mandal Commission Report

After comprehending the chronology, we may determine the foundation for the Mandal commission’s findings. Classes were graded on a scale of 0 to 22 by the Mandal Commission. Eleven factors were applied to all castes in a given state that were surveyed. As a consequence of this application, all castes with a score of 50% (11 points) or less were classified as socially and educationally backward, while the remaining casts were classified as ‘advanced.’ Each group’s indications was assigned a different weight. Three points for social indicators, two for educational indicators, and one for economic indicators. They were weighted according to their significance and the country’s need for a reservation for them.

Thus, having determined that 52% of the country’s population was made up of OBCs, the Commission originally contended that the proportion of reservations for backward classes in public services should likewise be 52%. However, since this would have violated a previous Supreme Court judgment requiring that reservation of posts be less than 50%, the proposed reservation for OBCs had to be set at a level that, when combined with the 22.5 percent reserved for SCs and STs, stays below the 50% limit. In light of this legal requirement, the Commission was compelled to propose a 27% reservation for backward castes alone. Due to the inclusion of the OBC, the connection between caste and economic backwardness became even weaker.

Further, according to the commission, reservations in government employment and educational institutions, as well as any financial support, would remain a temporary measure until the underlying causes of backwardness were addressed. The most critical single step toward the wellbeing and elevation of all backward classes is a fundamental change of current production relations.

As a result, we have established how and why the reservation policy was implemented. As previously stated, many recommendations were not implemented and those that were implemented contained inconsistencies that were resolved by the Supreme Court in the Indira Sawhney case(also known as Mandal case). Thus, we will now examine the case .

This was the case made against VP Singh’s execution of the Mandal Commission’s recommendations. It was heard before a nine-judge bench of the Supreme Court, which ruled that the Union Government’s plan to reserve 27% of government employment for backward classes is legally acceptable, provided that socially advanced people, including the creamy layer, are removed. However, some conditions had to be followed, such as bookings should be limited to original appointments and not promotions, and total reservations should not surpass 50%. As a result, the court partially upheld the two impugned notifications (OM) dated August 13, 1990, and September 25, 1991, as valid and enforceable, subject to the conditions set forth in the decision, which include the exclusion of socially advanced persons—the creamy layer of the backward classes. However, the court invalidated the Congress’s OM reserving 10% of government employment for economically disadvantaged groups among the upper classes.

Thus, we could see that the over reaching policies were removed and an efficient policy was established from the Mandal Commission Report by the SC’s decision :

According to clause 4-A, nothing in this Article shall prevent the state from making any provision for reservation in matters of promotion to any class or classes of posts in the service of state in favour of the Scheduled Castes and Scheduled Tribes which in the opinion of the State, are not adequately represented in the services under the State.

Clause 4-B seeks to end the 50% ceiling on the reservation for SCs/STs and BCs in backlog vacancies which could not be filled up in the previous years due to the non- availability of eligible candidates.

Reservation under the Indian Constitution

After understanding what is reservation policy and its need we will look at its provision present under the constitution to protect against such discriminatory practices.

An analysis on the case CIT v. Nalwa Investment Ltd