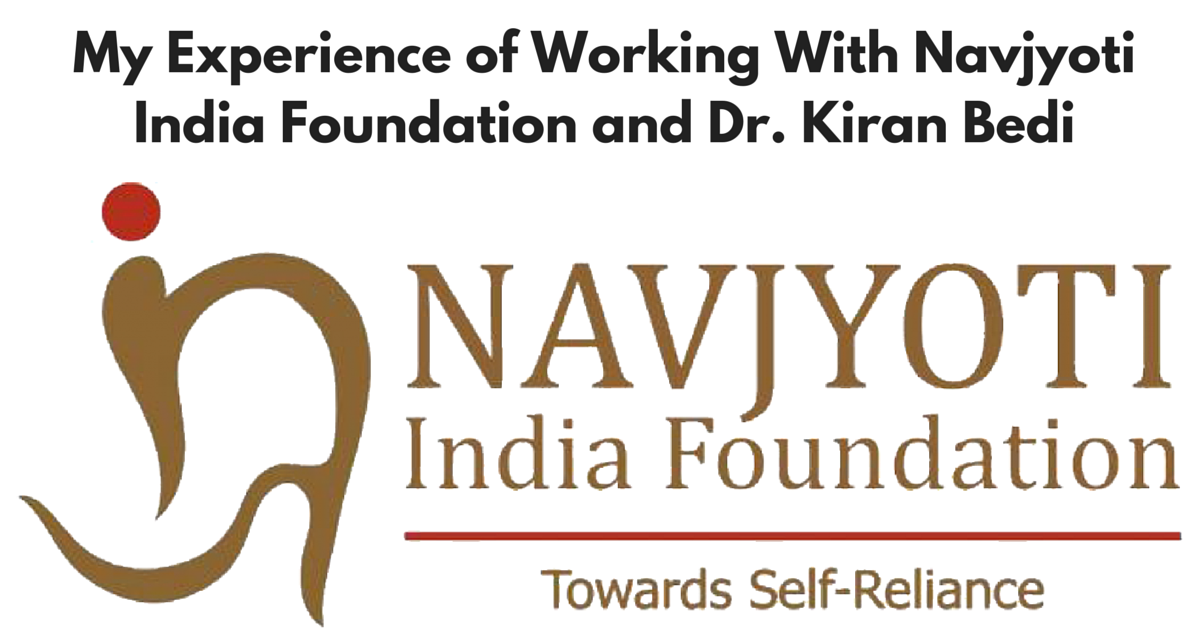 Author of this article is Tanya Shrivastava, a student of UPES, Dehradun. Want to share your law school experiences? Email your write up to [email protected]

A month at Navjyoti taught me so much more, about life, than what I have learned in the 19 years of my life, combined. From meeting one of the most successful women i.e., Dr. Kiran Bedi to communicating with hundreds of people deprived of, even a proper shelter, this one month internship gave me the real picture of India, so much better than what most people get to see in their whole lifetime. Wandering through the basti and communities and observing the condition of living there, my appreciation for Kiran ma’am and her associates, for initiating this successful Foundation, increased each day.

I joined here with tons of doubts in my mind as to whether my decision to come here was right or not. Being a law student, I was confused whether this internship would be helpful for me towards my career as lawyer, considering the work of this organization was mainly based on the basic level of social service. But after just one meeting with the Executive Director of the Foundation, I was sure that I am at the right place. And towards the end of my internship period I realized that I have got everything out of it, all that was promised by her. As elucidated by her, we learned how to connect with different people, how to communicate with them, what are the traits which a lawyer must have.

The first few days were just learning about how the organization functions, how it started, etc. then once we got our respective projects in the groups of two, we were required to visit different communities, and when I say “different” I mean people living around half a mile from each other and bearing nothing but the feeling of sheer hatred for each other. So much so that they didn’t even consider it safe to send their children a little far from their houses to Navjyoti Community College that guaranteed them a bright future and promised a life away from the hellholes they were stuck in. The folks around were unaware of the importance of education, skills or even hygiene. And in those backgrounds, we had the opportunity to meet the most talented people who were completely unaware as to what the world has to offer in exchange of their unique and exceptional skills. They considered their lives entrapped between the invisible bars around them, the bars of society, responsibilities, fear and in most cases, being born as a female!

Our work there was to interact with these people, try to assess their problems (if they were not apparent enough!) and work to get them out of those problems. During the beginning days of our field visits, we were almost blank as to how we were supposed to start up a conversation with a bunch of people who were so different from the ones who we usually interacted with.

We were too conscious about saying anything to them. Actually that would be putting it lightly, in reality, we were scared to death. What if they took, whatever we had to say, as an offence? What were they capable of doing to two persons knocking on the doors of a deserted street in the corner of the city (to which most of its population was oblivious to), with nothing near to a weapon except for umbrellas, (which they would not remove in the terror of getting tan.) telling them that they need to change their lives? But entering just the first house changed our conception about everything. We were welcomed like guests, and instead of getting annoyed, they were actually interested in what we had to say and what the Navjyoti had to offer! In fact, using “interested” would be undermining the expressions on their faces. The lady in that house got so excited that she called her neighbors to listen to us and soon we were standing there addressing to a crowd of around 20 people! (and none of them wanted to kill us!) At that moment we believed that it was not them who were responsible for their condition, given an opportunity, they would welcome changes around them. And with that feeling of professionals, our first day of field visit ended. But from the second day we were struck by the harsh reality. That’s when we realized that we certainly were not the first ones to have tried to work towards their wellbeing. To summarize, from the second day we realized that things were not as simple as we presumed them to be. We were going to have a hard time dealing with them. (Considering no one even opened the door for us) But we continued anyway. We just had to make them understand about the opportunities they would be missing out on. (or we would be missing out if we failed and got bad remarks on our certificates.) So with this new inspiration and zeal, we started afresh and tormented the people to listen to us and convinced many to come and visit the counselor in our office. We took two children to the Community College ourselves for which we had to almost fight with their mother and wait in front of their house for around an hour. But in the end it all turned out to be good. We walked away from Navjyoti India Foundation after handing them a huge list of people who wanted change (or were convinced by us that they did) and were willing to join Navjyoti for same(and yes our certificates had pretty good remarks).

The center of Navjyoti India Foundation where we worked had a Community College functioning in its premises which basically took the children or adults of the surrounding communities as its students and worked towards polishing their skills. Basically these were the people identified from the lot in the communities and were already working towards the, much required, change. Once we were asked to take a session with them and teach them (which to our surprise turned into a discussion) about whatever we knew about law. During the session we observed that not only these people have accepted the new dignified life but also, they wanted to do anything they can to provide the same to the other people. This gave us the idea to arrange for a mass awareness program with the help of these students. And what could be the better way of doing so other than a Nukkad Natak? And within a week we formed a committee of students of all ages (which we were promised, would become the official committee), wrote scripts, taught them acting and addressing people (which basically meant shouting) and finally we had a group who were difficult to be distinguished from professionals. The Foundation helped us in organizing the Natak(s) in all the areas that the interns were working and as expected we got remarkable response from the people as well as our heads in the office.

But the best part of the whole month of working with Navjyoti has to be the celebration of Dr. Kiran Bedi’s Birthday, where we had the opportunity to meet Kiran Bedi herself! She chose to celebrate her birthday with the staff and associates of Navjyoti which itself depicts her modesty. The celebration was not with any lavish party but just her spending the whole day with us. Playing games and having a mass Yoga session. The whole country is aware of the huge examples that she has set. Moreover her mantra that “if the god has given you something, it is because he wants you to provide the double of it to the less fortunate than you” is the foundation of Navjyoti India Foundation and makes her an inspiration for the whole world.

I would remember Navjyoti India Foundation for a lot of things, but, one thing that I am sure I will not find anywhere else, which truly makes it unique, is the work culture there. The way the staff interacted with each other and with us, was exceptional. For the small period, that we worked there, we were included in every major meeting, asked to contribute ideas in every major decision, allowed to interact with the highest authority directly, so basically, we were treated equal to the working staff there. Moreover, we were added by them in their social groups! In short the staff of Navjyoti Community College, Karala works together as a family, and are always ready to welcome any new member who wants to be a part of this family. One thing that I am sure is that once I complete my studies, I would work to help in this cause in any way I can.

Insurance contract : all you need to know