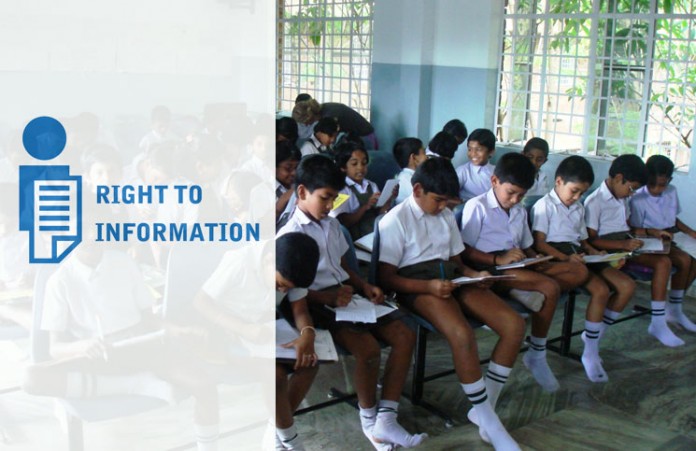 This article is written by Rimjhim Vaishnavi, a student of NUSRL, Ranchi, on how to file a RTI against a private school.

RTI Act was introduced in 2005, which gave general public right to look into the working of different governmental departments and entities through then questions. Initially only Parliament had the right and power to question the working of those departments and entities. The main objective behind RTI Act was to promote transparency between the general public and government. It works on the wheel of democracy, where the people are empowered to question their representatives and government which is working for their benefits.

RTI Act was required to make the citizen vigilant about their rights and how they add up to a proper working of government.

Sec. 2(h) of Act states who all are covered under the umbrella of this Act which includes any authority, body or institution which is either self-governed or has been constituted by or under the Constitution of India, under any law passed by the Parliament, by any other law passed by the State Legislature, by notification issued or order made by any appropriate Government inclusive of those body owned, controlled or substantially financed, non-government organisation substantially financed directly or indirectly by the government. These organisations and bodies are considered public authorities who are directly covered under the RTI Act, whereas private bodies do not come under the ambit of RTI Act directly.

Questions which comes in the mind of every prudent person is regarding to the private entities like private schools, colleges, private organisations, etc., do they come under the ambit of RTI Act? If not then how can one file RTI application? This issue is one of the most debated one.

The organisation which does not comply with the definition of “Public authority” under Sec.2 (h) of the RTI Act is considered to be private entities. But just being a private entity does not exempt one from RTI Act. Any citizen can avail information from the private entities as has been stated below:-

In the case of Khanapuram Gandaiah v. Administrative Officer & Ors[1] where the apex court stated that as per Sec.6 of the RTI Act only those information relating to the private entity could be attained which can be accessed by the Public Authority under any other law.

Society is dynamic so it time and to maintain the decorum of the society many changes are being brought in different legislation and hence with the time span changes have been brought in the RTI Act. The recent change was brought by the Central Information Commission, who stated that schools which are covered under the Delhi Education Act, 1973 and Right to Education Act, 2009, will be covered under RTI irrespective of it being a private entity or public entity. This means that any citizen could file an RTI against them to ensure the transparency.

In relation to Delhi Education Act, under the RTI Act Sec.2 (f) which states that ever private school under Sec. 4 and Sec. 8 of Delhi Education Act has a duty to follow the regulatory conditions of service and has to keep a record of the same which are covered under the RTI of the employees and hence the Central Information Commission passed an order which was sustained by the Delhi High Court, where public authority as well as private authority is mandated to provide information on service records, salaries, vacant seats total vacancies in classes,. But to some issues like estimated receipt of budget, statement denoting the salary disbursement or payments of the ensuing year.[2]

With respect to Right to Information Act, 2009 schools are abided to follow the regulatory conditions for services along with it information relating to the application for economically backward classes and the seats availability for them should be recorded therefore these information are also open for RTI.

Any information which has to be sought from any other private schools which has not been registered under Delhi Education Act and Right to Education Act can be availed through the through government entity or the public authority under which the Private entity has been registered. For which RTI application has to be filed to that entity and only those information could be gathered which is available with the government entity. The information gathered through those government authorities will be covered under Sec.2 (f) of the Act,[3] which deals with information relating to private body which has been gathered through public authority through different laws regulating those private authorities.

How to file RTI against private authority

Apart from it the person filling the application has to comply with the RTI format and the fees for attaining information and other rules mentioned in the Act.

Although RTI does not apply to private schools directly at the same time it does not exempt them completely. It indirectly controls private school. The reason behind it is that the schools are the building blocks of society hence it is necessary to have a transparency despite of being private school or public school. RTI has been enacted for the welfare of people and hence if it extends to some entities then how can welfare be ensured. Therefore some more changes are needed to be made so that all the private schools could be covered directly under the RTI Act. Recent order of the Central Information Commission which has been accepted by the court denotes the concern of government towards these issues.

© Copyright 2016, All Rights Reserved. | Powered by iPleaders | Designed & Maintained by Sourav & Team
What updates do you want to see in this article?
X
Need assistance in filing an RTI? Talk to our expert for Rs. 499 for 30 minutes and get all your questions answered. Introductory price and one time offer. We will call you within 24 hour of payment.
Served By