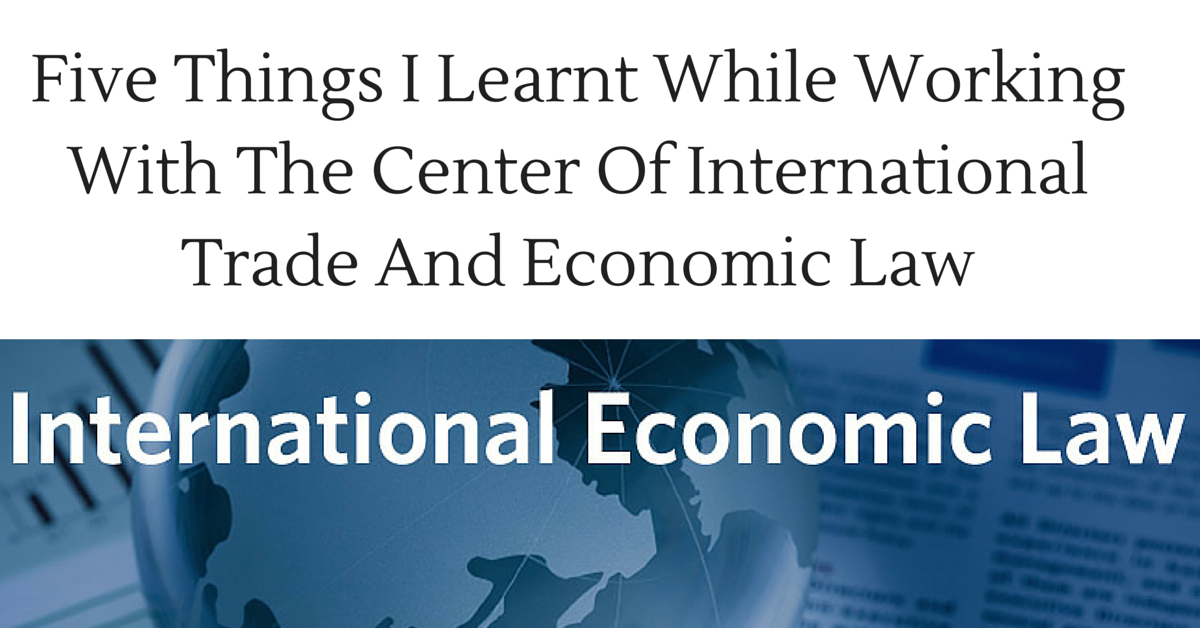 This article was written by Nikita Hora fourth year law student of O.P Jindal Law University. Want to share your law school experience? Email your write up to [email protected]

We often prefer buying imported products or in our daily life use so many Chinese good or on every iphone its written designed by Apple California and assembled in China. But does these imported products needs only contract between the seller and the buyers. Is it that simple, because all countries have their rules and regulations moreover the rate of the currency also changes mostly everyday? Is there no scope of conflict between the trading companies? If there is any conflict then how does it get resolved? Is there any body in the world that controls all the countries inter-trade policies?

The answers of these above questions are hidden in International Trade Law. There are a lot of rules, regulations, soft laws, guidelines, treaties etc involved between the trades between the countries. World Trade Organisation (WTO) is the body that has come up with global rules of trade between nations. If there is any conflict between the countries then WTO acts like a tribunal that is called as the dispute settlement body. In other worlds WTO can be also called as forums of trade negotiation. WTO also monitories national trade policies(How it does is mentioned below as CITEL helps to do). It also gives technical assistance and training for developing countries helps to cooperate with the international organization.

When WTO was formed in 1986 it only had a system of trade rules and no services were included. On 1 January 1995 General Agreement on Trade and Tariff replaced WTO as the organization was overseeing multilateral trading systems. Those countries who have signed these agreements have officially become the members of WTO. The WTO websites all trade and services topic customs evaluation, tariff and non tariff, import and exports duties, etc of 128 countries. Even it contains all the documents, case laws, and precedents of the disputes that have come in front of WTO. To get the specific and correct information there is intense research skills required and knowledge regarding the concepts and terms.

I have being helping and have an authorship in TPMR (Trade Monitoring Policy Reports) that is useful for the people in IIFT. TPMR is published quarterly of Brazil, China, United States and European Union. In the report we analysis the trade arrangement and policies, regional and international agreement amongst the countries for trade,details about measures which affects imports and exports, investment regime as they are not uniform in all the nation, increase or decrease in taxes which one of the factor that effects the trade and dispute settlement where WTO mostly sets up the tribunal to resolve the matter.

Recently Prime Minister NarendraModi is visiting Japan, often MsSushmaSwaraj (Foreign trips) is out of India they go to various countries to strength relations and sign treaties which affects the trade. The report contains the recent treaties and what effect they in have in which sector of the economy. Often there are reasons when import and exports reduce or stops of poor quality increase in prices etc that is essential information and has to be mentioned in the reports.

So preparation of good reports requires good drafting and intense research skills and understanding and the analyzing the economies.

I have got an opportunity to analysis the free trade agreement (FTA) and Bilateral Trade agreement (BTA) signed between the countries. Recently I have analyzed a FTA of India- Korea that focuses on the movement of Indian Professional in Korea. It needs the understanding of Comprehensive Economic Partnership Agreement (CEPA). It was about the different categories working visa and for the time period that Korean government provides to Indian professional from 160 sectors such as IT. According to Industry body FICCI (Federation of Indian Chambers of Commerce and Industry) the agreement will improve the market access for Indian services providers and professionals.

Korea aims for massive inflows of information technology (IT) workers, engineers, and English teachers as both sides agreed to allow temporary migration of professional workers, which may be threats to local employees in the related sectors, local media expected.

I was a rapporteur for the conference on Trade, Investment and Corporate Governance: Law and Policy in India China and got an opportunity to have escorted the Chairman of Confederation of Indian Industry (CII) where it got a lot of knowledge regarding the position of the economies, similarity and difference between China and India economies and what role and difficulties both the developing countries face in WTO.I got the knowledge of treaties and exception that both the countries have from each other in sector of trade.

Lastly for understanding the international trade and analyzing the economy it is essential to interpret the GATT agreement and have a basic knowledge of Anti dumping, Most Favored Nation (MFN). They are the 2 basic features that are found in most of the disputes. For the interpretation of GATT it is required to read a lot of case and precedent of disputes amongst the trading countries and effected parties.

Through this center I have enhanced my research and writing skills. I know when treaties (BITs, FTAs, MIT etc) have to be referred and how they are interpreted if there are any disputes amongst the countries.

Contact building, giving presentation was something that I learnt when I got an opportunity to attend conference through my center. The most important thing that I learnt is to do work under stress and complete the work on time. I am looking still working with the center on TPRM and on a recent project on India- U.S trade in Pharmaceuticals.

All you need to know about constitutional design

All about the 73rd Constitutional Amendment