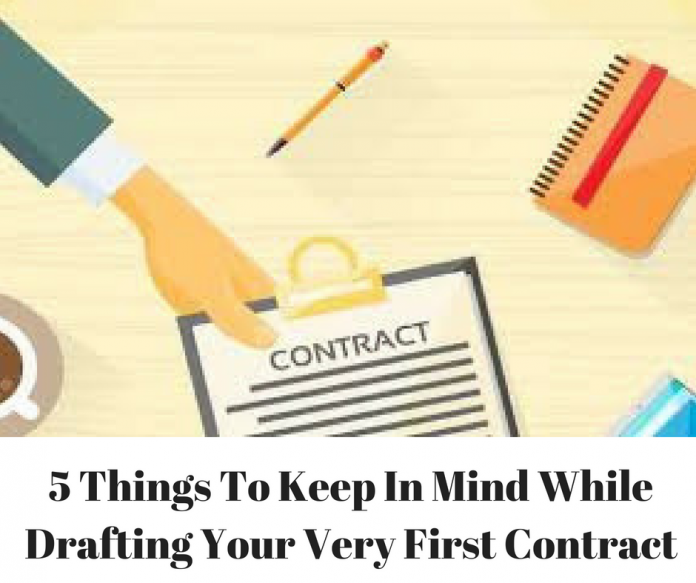 This article is written by Mohona Thakur from Team iPleaders.

As interns, most of us never get a chance to draft an contract. If you’ve ever been asked to draft one, consider yourself lucky. So where do we cultivate the habit of drafting? How do we know what we draft is good?

Let me tell you a little something I learnt from my experiences.

During my second year at law school, I interned with Larsen and Toubro (L&T) at their head office in Mumbai. I had chosen to intern in-house because of two reasons – (a) I get to absorb what really happens in the legal department of a company and, (b) this was different than the quintessential law firms.

On my second day at L&T, I was asked to “review two contracts and incorporate important boilerplate clauses into a new contract.” These were my instructions. I was given no background to the contracts I was about to review, no inputs on what may have been negotiated and agreed upon between parties. In fact, I wasn’t even told what kind of a contract I was to review.

In about thirty minutes, in my inbox were two 300 page contracts titled “Software Subscription License Agreements.” I had a day and 600 pages to go through apart from drafting a new boilerplate contract. As a nineteen-year-old, barely into law school, I only wished Contracts-I taught us how to draft or review contracts.

Four years down the line, fresh out of law school, I was given the responsibility of handling clients on my own and with it came the responsibility of drafting water-tight contracts. The first lesson I learnt while drafting contracts was right here: know the answers to ‘who-what-when-where-why and how’ of the contract. Here is what these five major questions refer to:

Imagine if you were asked to draft a contract, let’s say an employment agreement between a company and a prospective employee and you had no details about the employee. How would you go about it?

Most lawyers do not bother about the parties and generally leave those details blank, and at times even expect the clients to put in their name, address and other relevant details. This is a mistake. It is important that you know the details of both the parties and thoroughly so.

Let me give you a rather small instance. While drafting a Memorandum of Understanding a couple of months ago, I did not have the complete information about the other signing party and like a true lawyer, left the field empty in the document. A part of me wanted to get done with the work and quickly so. That part of my brain decided to be lazy and finish the work by the end of the day and move on with life.

The very next day my boss looked at the document and asked me “Have you ever drafted a contract before this one? Because looking at this MoU, it doesn’t look like it.” Aghast, I asked him, “Why? Where have I gone wrong?” What was then pointed out to me was the fact the details of the parties were left empty.

I made the mistake out of sheer laziness to find out the exact details from the other party and, of course by taking it for granted.

Your superiors notice such minute details. At the end of the day, better drafting skills lie in the details and that’s what makes a contract water-tight.

Do you think you could begin drafting a contract without the details of what you are drafting the contract for? Or why are the parties entering into a contract in the first place?

All contracts have a purpose. Think about it. Why would anyone get into a contract if it wasn’t for a reason. Employment contracts are essential to an employee for the mere fact that this is proof not only of the fact that he is an employee with a company, but also because it lays down each party’s rights and obligations clearly.

In fact, this is an issue that lies in the absolute basics. Let’s say you are making an employment contract for an employee in your company. Is the employee joining as a marketing associate? Or in the sales team? Is he to work as a full-time employee or a consultant?

This is information you need to have beforehand, before you sit to draft the contract, because a number of other clauses would be affected by how much or how little information you have. For all you know, you would draft an employment contract for a full-time employee, whereas what was negotiated and agreed upon would be a consultancy agreement.

This was a rather simple example. Let’s say you go ahead and draft advanced contracts such as licensing agreements, then it would be of utmost importance that you know not just the ‘what’ but the nitty-gritties too. The more technical the contract is, the more difficult it will get to pinpoint the ‘what’.

Would you rather have this information before hand and work with it, or would you like to correct your contract and re-do the contract after you’ve spent hours drafting it?

For example, let’s take constructions contracts. You would have a start date, and a commission date, a specific deadline for delivery of certain raw materials, and then specific durations by when phases of the construction of the entire site would be completed. These clauses are either standard, or well-negotiated. The intention of your client while you draft the contract must come across clear to avoid any confusion later on in case of litigation.

Locations are crucial in all contracts. An arbitration contract wherein the parties are located in Bombay cannot have a seat in Delhi, unless the parties explicitly agree to the same in writing.

A lot of the work done by lawyers is on the basis of sample contracts, or previously drafted contracts, and not all sit and apply their brains to change the relevant clauses. More often than not we take the locations to be for granted and the lawyers generally notice that they may have made an error only when parties maybe on the verge of a dispute. These are generally tagged to be ‘typographical errors’ by the lawyers who drafted the contract. However, when such contracts, land up in courts, the advocates on either side look for the slightest of errors to interpret the contract in their favour.

In fact when you look at a standard contract you see clauses such as ‘Governing Law and Jurisdiction’ and ‘Enforceability’ that refer to certain jurisdictions wherein the contract would apply.

‘How’ can safely be said to be the crux of any contract. Imagine a contract with vague deliverables, or no clause that explicitly states the consequences of breach of contract. Do you pay damages? What is the liability? Is it joint of severe? Do you go into mediation, arbitration, or do you sue the other party in court?

These questions are all answered through certain boilerplate clauses such as: Waiver, Rights and Liabilities, Damages, Severance, Guarantee and Indemnity, and the likes. A common question arises here – How do we know what are these boilerplate clauses?

True. With absolutely zero idea about how contracts are drafted, especially when it is your first attempt, it’s only natural that you use a sample contract. There is no harm in doing that, but out of personal experience, you learn and retain a lot more when you draft these clauses yourself. There is no scope of forgetting something once you’ve done it from the scratch yourself. It’s like learning how to the ride the cycle or learning how to walk as a kid, you do not forget it once you’ve learnt it.

As I write this, I go back two years in my life to recollect every word my boss had then taught me – “use short, to the point sentences, avoids ambiguity.” But, why did my first boss have to teach me how to draft an effective contract? Why didn’t Contracts – I and II cover it back in law school? Why did I not learn it during any of my internships?

I realised quite early that I wasn’t the only one facing this issue. Think about it. As a fresher, when you sit for interviews, especially the corporate law firm interviews, why is it that they ask theoretical questions? I remember being once asked “What’s the difference between a guarantee and indemnity?” and not “When do you use guarantee and when do you use the indemnity clause in a contract?”. As a matter of fact, at the end of this interview, it was made certain that corporate law firms invest resources, time and energy in training fresh law graduates for a year and a half to meet industry requirements.

What’s worse? This seems to be the accepted industry norm. They expect law graduates to know where to find the law – that’s their basic requirement. The rest can be learnt and skills acquired over-time, they say. However, I do not believe that is entirely true.

Look at the cycle.

Associates at law firms or reporting managers at companies or advocates in courts do not think interns to be competent enough to handle drafting. I can safely say this, I believe that interns generally do not get handson drafting work at law firms. There could be two reasons for the same, either they do not think that law students are competent enough to draft contracts on their own (which isn’t entirely untrue) or that they do not have the time in hand to train these interns by telling them how to go about it. Eventually, by the time these law students graduate out of law school and turn lawyers, they have no experience in handling contracts and partners and senior associates and managers then take it upon themselves to train these very lawyers for a considerable period of time to draft contracts.

I have one question. How easy would it be if you already knew how to draft certain clauses, were well aware of how specific contracts function, knew what boilerplate clauses meant, had learnt a few tricks about negotiations or like I did, tried your hand at mock negotiations, taken up contract drafting courses, or maybe just had the time to google how to draft your first contract (to be honest, not sure how helpful google would be in this department).

As a parting advice, I’d say that you’d have to be ahead of the curve, the learning curve that the industry itself has set for all freshers. Imagine the possibilities if you knew how to draft a sound contract by the end of law school? Would any law firm or company say no to you?