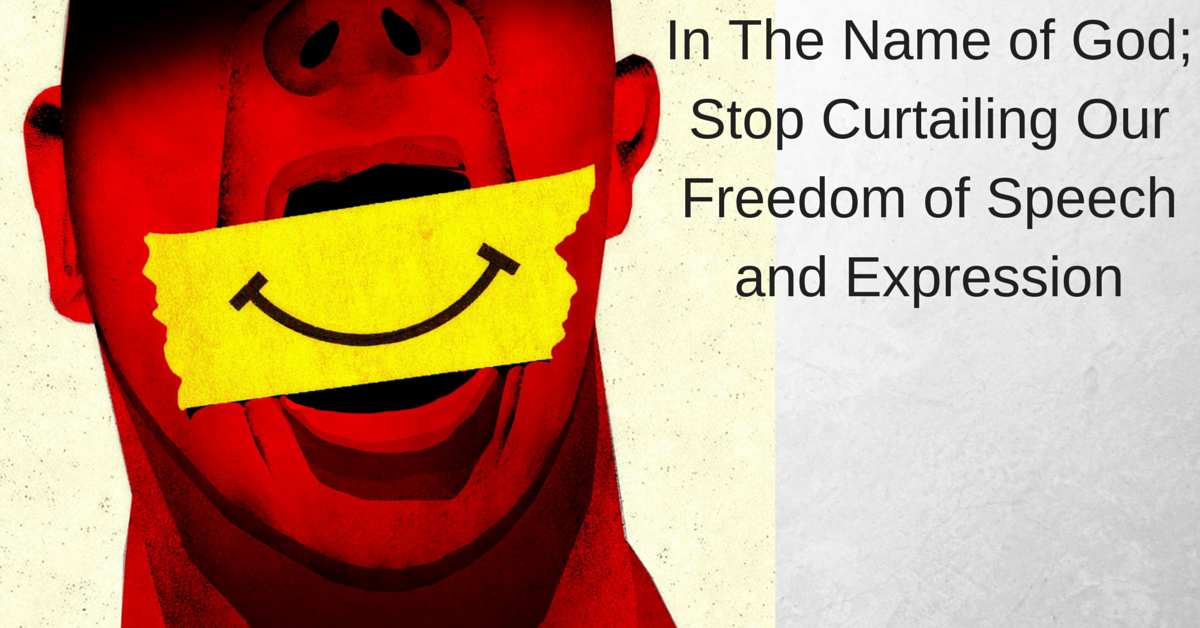 This article is written by Inayat Dhanda. Republished from A First Taste of Law archives.

Ram ke Naam, which literally translates to In the name of God, is a documentary film on the events prior to the Babri Masjid demolition. It is directed by Anand Patwardhan, who is known for social activism through his films. I had the privilege to appreciate the film while I was studying Media and Communication, as a part of my Journalism module at Symbiosis Institute of Media and Communication (UG), a few years back.

The film was supposed to be screened on the 27th December, 2014 at ILS Law College, Pune, where I am currently pursuing my L.LB.

Posters to this effect were all over my campus, which very proudly announced, that the director himself would also be present for a ‘Q and A’ round.

The documentary has coveted awards to its name; the National Award, the Film-Fare Award, various international awards and has also been showcased on Doordarshan. It carries a “U” certificate by the CENSOR board. Also, the Honorable Bombay High Court had ruled that it must be screened at prime time in the national interest.

With such distinguished accolades and appreciation in the documentary’s kitty, one eagerly awaits its screening followed by a session with the director himself. I too was one of those waiting.

Unfortunately, my beloved ILS Law College cancelled the screening just one day before its scheduled run.

If we go by the director’s Facebook page, he says, “This afternoon they (ILS Law College) called to say that after receiving threats, their faculty decided to cancel the event. They are refusing to say where the threats came from or to divulge the names of the faculty who cancelled the event. Obviously the students are themselves under threat”.

Later, I read that another student had called up Patwardhan and said that the screening did not fit into their schedule. A student on the organizing team of the festival who did not wish to be named stated that the college faculty members had called off the film screening. They said that the time slot they had planned would not have been enough for any film to be screened. They were quick to clarify that no threats were received and it was actually a miscommunication and an organizational error on their part.

Indeed an amazing answer to the director, who had booked his tickets to Pune. How responsible on part of the college, I must say. “This is business as usual,” said a senior student at ILS.

The reason stated above is a hard pill to swallow.

So, what exactly does the film portray, that allegedly invited the wrath of some group resulting in the cancellation of its screening?
Taken from Anand Patwardhan’s website
The film opens with the proposed Rath Yatra to Ayodhya with a voiceover announcing that after 1000 years people are finally awakening to religion and that they will fully awaken on the 30th October, 1990 when the Ram Temple will be constructed. The music used in B.R. Chopra’s Ramayana plays in the background. The film then focuses on a poster which welcomes L.K.Advani and has, Chalo Ayodhya, Mandir wahin banayenge (Let’s head to Ayodhya, we will build the temple there) inscribed on it. It then progresses to a somewhat familiar voice of a political leader who rallies, “I appeal to you. Ram’s flame will give you all the inspiration needed for the betterment of life”.

The film has always been a source of unrest among the Hindutva groups in the country.

This is not the first time that Patwardhan’s films have invited trouble. In August 2013, ABVP activists attacked students of the Film and Television Institute of India (FTII), Pune for inviting members of the Kabir Kala Manch- a Dalit protest music group to participate in a discussion with the audience after his film Jai Bhim Comrade was to be screened. Incidentally, both FTII and ILS Law College are just a few meters apart, on the same road in Pune.

While the students at FTII took out a procession against the attack in 2013, the students at ILS easily gave in to their faculty’s decision. “Jo hua, galat hua, (Whatever happened, was wrong)”, said a student. It ended there.

We live with this culture of accepting what the college prescribes to. I sensed this right from the first year at college when a female Professor pinned me down for wearing a crop top (not an inch of my skin was visible and I was wearing a long top underneath). ”Lady, go see the dress-code in the prospectus,” she said. When I respectfully replied, “I have carefully read the prospectus Mam. Kindly let me know how exactly I am improperly dressed?” she walked away. I was later counseled by my seniors and fellow students to follow what the faculty members asked me to and that I would unnecessarily invite trouble if I go to the Principal voicing my dissent. I couldn’t sleep properly that night. I cried, felt helpless. Look at the irony, we talk of women empowerment, we are headed by a Lady Principal, and a student gets shouted at, not once, but twice by two lady teachers on separate occasions for so-called “inappropriate” dressing.

It saddens me to see the state of affairs in one of the top law schools of the country. Day in and day out we are taught about Article 19(1) (a) – Freedom of Speech and Expression and its importance as a Fundamental Right. Seminars are organized, research papers are written and judgments are quoted by teachers and students. It has always felt good, that our constitution makers realized the importance of speech and expression and bestowed on us this freedom. I have always felt proud at this salutary provision.

The Right to Freedom of Speech and Expression is one of the basic Human Rights which is enshrined in all the major International Human rights instruments; the Universal Declaration of Human Rights (UDHR), the European Convention on Human Rights (ECHR), International Covenant on Civil and Political Rights (ICCPR) to name a few.

It is an inseparable element of our democratic society that we boast of, while belittling other authoritarian countries. Little of what rights we are guaranteed by the Constitution and taught in the educational institutions, are actually practiced.

Abraham Lincoln had said “Let the people be aware of the facts, and the country will be calm”. I’m patiently waiting for the day when this holds true for our country and its citizens.

The film merely shows the various events prior to the Babri Masjid demolition without colouring it with any opinion. So where was the problem?

What disturbs me even more is that the political events of today are exactly mirroring the happenings portrayed in the film. The Hindutva outfits are all riding high; just as they were in 1992, when the film was released.

For instance, Ram ke Naam covers the popular campaign of the Vishva Hindu Parishad to demolish the mosque and built a temple of Rama in its place. Even today, the Parishad proudly indulges in religious conversions all over the nation. They ram moral policing down the throats of others, direct the women of this country what to and what not to wear and beat up my friends when they are seen celebrating Valentine’s Day. Has anything changed? Improved? Changed definitely, but not for the better. Is this why my college allegedly received threats and had to give in to their demands?

Not just this, the film concludes with a byte of the BJP supporters who are seen justifying the murder of Mahatma Gandhi. As of today, the Hindu outfits have elaborate plans to cement a temple dedicated to Nathuram Godse. Has anything changed, a decade later?

Lot many parallels can be drawn between the documentary and the contemporary political events. A few days back, RSS chief Mohan Bhagwat publicly defended incidents of conversions as a ‘homecoming’ for non-Hindus to which the Central Government did not react. Raam ke Naam captures how these outfits were backed by the BJP back in the 1990s.

I apologize to the director on behalf of all those students and faculty members who were scared to stand up. The college could have resorted to police protection and set an example. And the students could have voiced their dissent freely and pressurized the college authorities to continue with its screening.

As Voltaire said, “I do not agree with what you have to say, but I’ll defend to the death your right to say it”. Only a society that keeps questioning itself can ever truly move forward. And the questions come from the freedom of dissent, which is the very soul of the Freedom of Speech and expression. There will be dissent: in fact, there should be. Till then, we will remain imprisoned in our own gilded cages.