In this article, Sofia Agrawal of KIIT School Of Law, Bhubaneshwar discusses the powers of Prime Minister and the Cabinet.

Our Indian system comprises three organs of the Government:

The full term of the office of Prime Minister is  5 years but they can hold their office only if they enjoy the majority in the Parliament and the term can end sooner if loses the vote of confidence in the Lok Sabha. Once they lose their majority, the period of holding their office also comes to an end.

The Indian Parliamentary system does not follow the democratic system of US where if the President holds his office twice and has completed his office, he/she cannot again hold their position. In India this system is not followed, here the President, Prime Minister can hold their office many times till they attain their discharge period.

Atal Bihari Vajpayee, The 13th Prime Minister of India. His first tenure as a Prime Minister was from 16th May 1996-1st June 1996, he held the office for 13 days but due to loss of support from the other parties to obtain the majority, he resigned. Then again he was chosen as a Prime Minister with a full majority from 19th March 1998- 22nd May 2004.

Thus in India, the Ministers can hold their office for many times till they enjoy their vote of confidence in the Lok Sabha.

Following are the disqualifications of Prime Minister:

The Office Of Profit is defined as follows:

The Prime Minister and other members disqualify if he/she is of unsound mind and stands so declared by the competent Court.

Not a citizen of India

The Prime Minister disqualifies if he/she is not a citizen of India or has voluntarily acquired the citizenship of the foreign state.

The full term of the office of the Cabinet Ministers is 5 years but these ministers can be changed upon the discretion of The Prime Minister.

Earlier this Ministry was in the hand of Smriti Irani and now replaced by Prakash Javadekar on the discretion of the Prime Minister.

Earlier this Ministry was in the hand of Najma A. Heptulla and now replaced by Mukhtar Abbas Naqvi.

Hierarchy of The Council Of Ministers 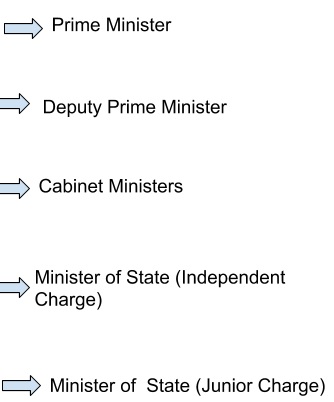 Removal Of The Cabinet Ministers

Is Prime Minister Part Of A Cabinet?

Prime Minister is the Chairman and part of the Cabinet.

Prime Minister has the following functions in the Cabinet:

As quoted by, Dr B.R.Ambedkar,”The Prime Minister is the keystone of the arch of the of cabinet and until we endow that office with the statutory authority to nominate and dismiss Ministers there can be no collective responsibility“.

Powers Of The Prime Minister And The Cabinet

Power to appoint the Authorities

Power as the Leader of the House Of Parliament

Aid and Advice the President

Power as the Chairman of The Cabinet

Power to Remove The Minister

Thus, the Prime Minister has the power to impose an emergency when the situation is as such.

Power to formulate the policies

Power over the Executive

Power as the Coordinator