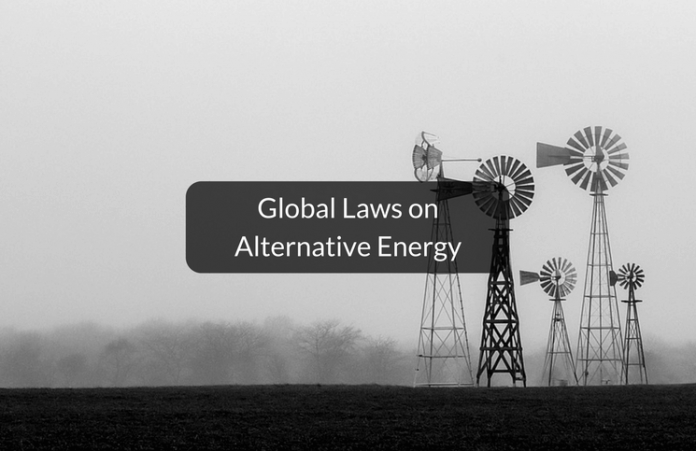 In this blog post, Vivek Chandar, pursuing M.A. in business law from NUJS, Kolkata, talks about various laws from around the world to encourage use of alternative energy.

Any change is resisted, may it be person, company or even a nation. This is very true in regard to changing from conventional energy sources to alternate energy.

Some of the barriers to shifting to alternate energy are:

Some of the laws being made around the world to encourage use of alternate and/or renewable energy region-wise are covered below:

Renewable portfolio standards: Most of the states in US have policies designed to increase generation of electricity from renewable resources. These policies require or encourage electricity producers within a given jurisdiction to supply a certain share of their electricity from renewable resources, which include generally wind, solar, geothermal, biomass, and some types of hydroelectricity, and may include other resources such as landfill gas, municipal solid waste, and tidal energy. These are not at national level. In some cases they also allow sale of credits, in utility company uses renewal energy more than the minimum required by the relevant state.

Electricity Industry Law: Mexico targets to provide 35% of the nation’s electricity generation mix by 2024, 40% by 2035, and 50% by 2050 from clean energy which includes renewable, nuclear energy and carbon capture. For achieving the same electricity reforms are in process and has provision for selling credits to further encourage the use of alternate energy.

Renewable Energy Sources Act: It has helped in boosting the alternate/renewable energy sector in Germany. The targets set by Germany are higher than provided in the EU Directive.

Renewables Obligation: It is designed to encourage electricity generation as it obligates the electricity providers to source an increasing proportion of electricity from renewable sources. It is similar to the renewable portfolio standards detailed in Item I.A.2 above.

Tax exemption in place to promote wind energy and other renewables.

Directive 2009/28/EC on the promotion of the use of energy from renewable sources (Renewable Energy Directive) sets a national target of a 34% share of renewables in Austria. Austrian energy strategy, published in March 2010 provides the basic principles of the energy policy until the year 2020. It calls for a rapid but sustainable expansion of energy generation from renewable resources.

Currently most of the ME countries other than some listed below, do not have regulations in regard to renewal/alternative energy, maybe due to abundance of oil/gas in the region.

Renewable Energy and Efficiency Law (REEL) in April 2012: Exempts all equipment and systems from customs tariff and duties. It ensures that the energy produced will be purchased by the power company and connected to grid.

Limited policies and regulations: Renewable energy policy is not yet well established.  The government’s focus is on reducing the environmental impact of fossil fuel used to generate electricity. An integrated policy will attract renewable energy investments in Kuwait.

Reforms to the Renewable Energy Target in 2015: The RET covers both large scale and small scale renewal energy projects. The scheme has provision to receive “certificates” which can be sold. It encourages additional generation of renewable energy through financial incentives, and hopes to ensure that at least 20 per cent of Australia’s electricity supply will come from renewable sources by 2020.

Renewable Energy Act 2011: It prioritizes renewables over fossil-based fuels. It is mainly regulatory in nature. It also provides for feed-in tariff subsidizes.

The Energy Conservation Act 2012: Minimum energy management standards specified for large energy users in the industry sector. The standards only affect companies that consume more than 15 GWh of energy annually. The Act is part of Singapore’s plan to achieve its target of 35% improvement in energy intensity by 2030 from 2005 levels.

Key objectives include the:

There is no renewable energy law in Myanmar at present. Regulations are found in energy policies and electricity laws.

From the above, it is observed that all over the world, importance of alternative sources of energy are being encouraged.