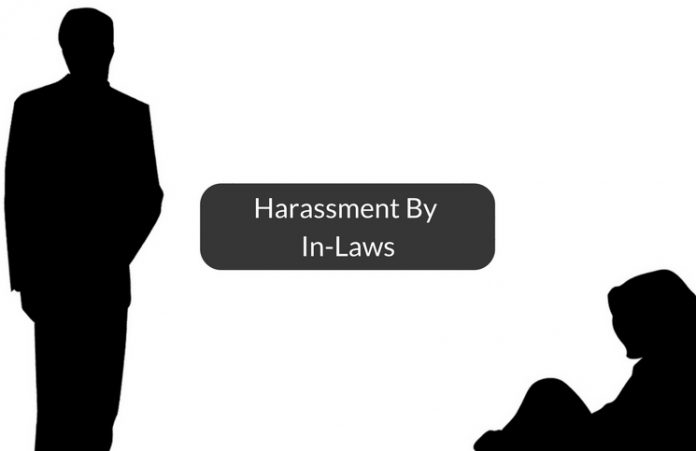 In this blog post, Pravesh Naveriya from RDVV, Jabalpur, talks about the steps you can take if you suffer harassment by in-laws.

Harassment of a Woman by Her In-laws

What Would Amount to Cruelty

Cruelty may be either physical or mental. It is not necessary that to get justice against the in-laws a physical cruelty has to happen but a mental cruelty too would serve as a proper evidence to take a legal action against her in-laws. The acts which would amount to cruelty against a woman are:

Suggested Reading: Why Mediation is Important in Divorce Cases

What Can be Done in Case of Harassment by In-laws

Most of the women in the country are unaware of these circumstances which would amount to cruelty and gives them a right to use a legal weapon against her in-laws. The provisions of law dealing with the harassment of a woman by her in-laws are Sections 498- A, 509, 304-B, 306, of the Indian Penal(IPC), the Domestic Violence Act, 2005 and Dowry Prohibition Act, 1961.

This section covers the cruelty committed either by the husband or by any relative of the husband against a woman. The cruelty may be physical or mental. This is a provision of law which was created for the very purpose to protect a woman from any harassment which she becomes a victim of in her matrimonial home. This is commonly known as the dowry harassment act.

The worst thing about this Section is that it has a loophole which has given the cunning people of the society to use this as a tool to threaten a person and try to extort money from him and his family.

If a woman has died within 7 years from her marriage by some bodily injury or burns and there are evidence that supports that she was subjected to either physical or mental cruelty for any property or money for dowry either by her husband or by any of her in-laws, then the death shall be considered to be a “dowry death” and it is a punishable offence under this section.

If a woman is being subjected to domestic violence and she has filed a case against her in-laws regarding this, and for this very reason they are not willing to her with them in their house then she can an application under this section and after examining the application the court may give directions to her in-laws that she shall not be excluded from her matrimonial house.

The Dowry Prohibition Act, 1961 was passed with the motive to bring the immoral practice to end. The practice of dowry has been there in the country from ages, hence it is not easy to change the mindset of people, and this could have been done only by legislating a strict law against this practice. This act prohibits the accepting or demanding of dowry either from the wife or from her family.

Harassment of a Man by His In-laws

However, ingenuity of lawyers can create some solutions in some specific situations.

Here are some of them:

There are a number of other crimes for which both men or women can complain. Consult a lawyer and discuss your specific situation. Feel free to submit your case in ClikLawyer.com to get some advice and get on a consultation call with a lawyer.

The harassment of a man or a woman by his or her in-laws is a topic which needs a lot of attention both by the legislative as well as by the common people. The legislative has made certain acts which deals with the matter but due to the fact that the common people are not able to accept that this is such an important issue to deal with.

The condition is even worse in the case of a man being harassed as there are hardly any laws which gives protection to a man against harassment. For this, there is a strict need to amend some of the acts and to bring man under the definition of a victim.